HOW TO protect the Slovak language has been a recurrent and controversial theme in domestic politics since the country's 1993 independence. But according to one of Slovakia's foremost linguists, the language has prospered from the experience of nationhood, and has emerged with neither its survival nor its purity threatened.
Slavomír Ondrejovič, head of the Ľudovít Štúr Linguistics Institute of the Slovak Academy of Sciences, says that languages tend to borrow what they need from other tongues to meet new challenges of expression, and that the growing number of anglicisms in Slovak are enriching the vocabulary rather than polluting it. 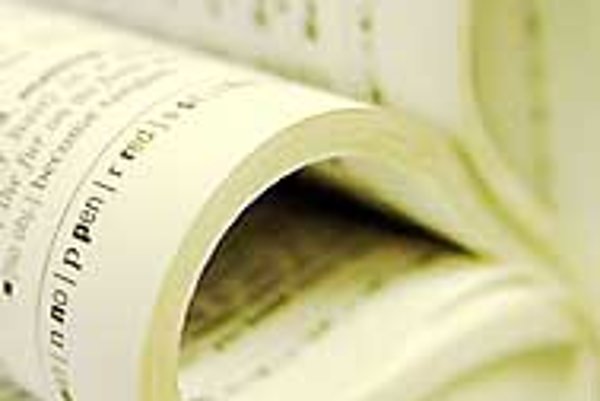 Font size:A-|A+
HOW TO protect the Slovak language has been a recurrent and controversial theme in domestic politics since the country's 1993 independence. But according to one of Slovakia's foremost linguists, the language has prospered from the experience of nationhood, and has emerged with neither its survival nor its purity threatened.

Slavomír Ondrejovič, head of the Ľudovít Štúr Linguistics Institute of the Slovak Academy of Sciences, says that languages tend to borrow what they need from other tongues to meet new challenges of expression, and that the growing number of anglicisms in Slovak are enriching the vocabulary rather than polluting it.

He has his work cut out in convincing the purists, however. From attempts in the 1990s to make Slovak the nation's only official tongue to a misguided proposal by the culture ministry in 2000 to fine people who used it wrongly, the belief survives that Slovak must be actively defended if it is to survive both misuse by its practitioners and submersion in a united Europe.

The Slovak Spectator (TSS): The Slovak language as yet has no equivalent to the Oxford English Dictionary, which is as much a history of English words as a manual to their current use. How do Slovaks get by without such a resource?

Slavomír Ondrejovič (SO): One of the things this institute does is to produce dictionaries fairly regularly. We already have a fairly large dictionary, six volumes, which was published from 1959 to 1968. It's a little out of date, of course, but it's a good dictionary, covering 125,000 words.

We are now preparing another dictionary, the Dictionary of Modern Slovak, which will be even larger, 220,000 words. The first volume will be published next year. We are preparing it based on electronic texts of the corpus of Slovak literature, not on the basis of submitted suggestions. For that reason it will be much more precise.

TSS: Where does the Slovak language come from?

SO: Slovak emerged from the common Old Slavonic language that was spoken by people who in the fifth to sixth centuries moved into the Carpathian basin. For the next thousand years, Slovaks lived in the northern parts of the Hungarian empire and spoke a west-Slavonic language with a few south-Slavonic elements, but it was not standardised. Czech was used for a long time as the formal language, and Slovak in everyday communication.

What people spoke in, let's say, the 14th century on the territory of present-day Slovakia was very much influenced by their social and economic status. If we take the case of an ordinary person, say an artisan, he would be significantly influenced by German, as German colonization at this time was very strong. Germanic expressions survive in everyday Slovak speech today, although more in dialects and in spoken language [e.g. ksicht, kšeft].

Latin was also widely used until perhaps the middle of the 19th century. Interestingly, it's here, in Latin texts, that we also see during the middle ages the emergence of Slovak as a separate language from the decay of the Slavonic family of languages - priests would sometimes write the Slovak equivalent of a difficult Latin word or sentence in their religious documents, so that the common folk would understand. There are various estimates of when the first roots of Slovak appeared, with some experts believing it was in the 12th century.

The first to formally codify Slovak was Anton Bernolák, who was part of what we call the "Trnava intelligentsia"; the dialect was known as the "west Slovak cultural tongue". But even though the language was codified, and a dictionary was issued after Bernolák died, the dialect did not survive, partly because Trnava itself lost its dominant character. Then, around the mid-19th century, came the codification of Ľudovít Štúr, one which is still valid today, apart from several corrections. The basis for his codification was the central Slovak cultural tongue.

TSS: The contrast with the Oxford dictionary seems very strong - rather than collecting thousands of instances of the use of words in everyday language and literature, the Slovak codifiers just sat down and decided what was what.

SO: Yes, once upon a time we did have personalities deciding how the language would be spoken and written. Later, in the 1930s, we also saw a politically motivated attempt to bring Slovak and Czech closer together, for example by modifying Slovak words to resemble Czech ones, in order perhaps to create a "Czechoslovak" language to accompany the joint state. But as I mentioned, that is no longer the case.

TSS: What are the greatest influences on Slovak at the turn of the new millennium?

SO: Slovak today is perhaps most influenced by English, as are most world languages. It's interesting to ask, however, why English has such great influence on other languages. English is the only language of worldwide communication even though several of its linguistic features are far from ideal. For example, English has enormous differences between how words are pronounced and how they are spelled, and it has many homonyms, while individual words often have many different meanings - Mark Twain and George Bernard Shaw were well aware of this shortcoming. English is also to a certain extent an unsystematic language, and has been greatly "pidginized". I think the reason that in spite of all this it has the influence it does is because the countries where it is spoken are economically powerful and excel in science.

TSS: What language would be more suitable as a world tongue? Slovak?

SO: Let's first look at the nature of the Slovak language. Despite the fact that foreigners find it complicated, to a great extent it is systematic and follows rules. It is a synthetic language, rather than an analytic one. Given our long agrarian history, we don't have a well-developed urban street vocabulary, which you notice sometimes in the translations of action films. Czech handles such translations much better. Yes, I do think Slovak would be a better world language than English, but of course we're talking on a purely theoretical level here.

But to return to your earlier question, despite the English influence, or maybe because of it, the Slovak language is surviving very well. Languages in general tend to absorb what they need from other languages. The reason a word like negociovať [negotiate] has been adopted, for example, has to do with differentiation of the language. We already had dohodovať sa [exchange opinions towards reaching an agreement], which would be the closest synonym, but it's not quite the same thing, and again is something different from rokovať [deliberate, hold talks]. The more tools we have, the richer the language is. The richer the better, and it does no harm unless it is abused.

Today, I would say that only about one-sixth of the words in use in Slovak are etymologically of Slavonic origin, even words you would expect to be domestic, such as bača [shepherd], valach [shepherd, gelding], or grúň [high Alpine meadow], which in fact are Romanian and were brought here by Romanian sheep-herders. Interestingly enough, despite all the years that Slovaks lived under Hungarian rule, the Slovak language was not greatly influenced by Hungarian.

TSS: Perhaps it only appears so to a foreign ear, but Slovak has gone through some substantial changes over the last 10 years since independence.

SO: Languages usually don't react that quickly to social changes. Nevertheless, if you take the 1989 change in the regime as an example, journalists stopped using communist-style phrases such as "bratská pomoc", and on the other hand started importing foreign terms such as "-gate" to describe a scandal, originating from the Watergate affair. We too started having "Budajgejt" and so on.

TSS: In 2000 the culture ministry suggested fining people who misused Slovak. Do you think the language is in crisis, or is threatened in any way by declining skill in its use?

SO: No, I think that's a myth. The belief that there used to be a linguistic "Golden Age" which has now passed is a common one.

TSS: Do you have any fears regarding the future of Slovak in an enlarged European Union?

SO: There is a good deal of uncertainty with our entering the European Union, and various studies are being done [of the possible impact on language]. English will likely be dominant; and even if all other tongues were to be equal, and EU events were to be simultaneously translated into all the languages of current and scheduled new members, you would get 284 different language combinations, which of course is impossible. So there will be certain pressures [not to use the languages of smaller members]. But on the other hand the EU says it cares about [the survival of] regional languages and cultures.

TSS: Do you advocate making Slovak the unitary state language, as a way of at least ensuring its universal use at home?

SO: Certainly not. Examples from many other countries have shown that it isn't healthy even for the majority language. The fact that minority languages are protected and spoken here only enriches the country. Just look at Štúr and his group - they spoke all of the languages used in Bratislava, including Latin, Hungarian, German, Czech, and Slovak. If Štúr hadn't spoken Hungarian, we wouldn't be using his Slovak codification today.