THE OUTRAGE that met the news that 35 Jewish graves had been desecrated in the northwestern Slovak town of Bánovce nad Bebravou in late January may have given the impression that anti-Semitism in Slovakia is limited to neo-Nazis and other fringe groups.
However, behind the closed doors of Slovak homes and in the corners of pubs and coffee houses, there is evidence that strong anti-Jewish sentiment runs deep in this society.
"[Anti-Semitism] is quite widespread, although it doesn't show on the surface that much. It is currently in a latent phase," said Michal Kováč, 22, a management student from Bratislava. 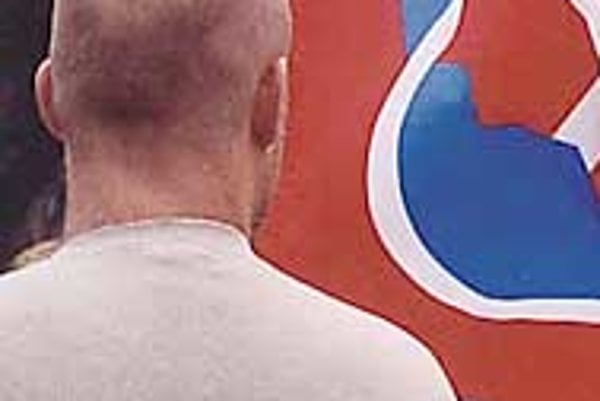 Font size:A-|A+0
THE OUTRAGE that met the news that 35 Jewish graves had been desecrated in the northwestern Slovak town of Bánovce nad Bebravou in late January may have given the impression that anti-Semitism in Slovakia is limited to neo-Nazis and other fringe groups.

However, behind the closed doors of Slovak homes and in the corners of pubs and coffee houses, there is evidence that strong anti-Jewish sentiment runs deep in this society.

"[Anti-Semitism] is quite widespread, although it doesn't show on the surface that much. It is currently in a latent phase," said Michal Kováč, 22, a management student from Bratislava.

This prejudice is directed at Slovakia's tiny Jewish community, now a fraction of the size it was before the holocaust.

"We can only estimate, but before the second world war there were around 130,000 Jews in Slovakia, now there are roughly 3,000. The largest communities are in Bratislava and Košice," said Jaroslav Franek, spokesman for the Federation of Jewish Communities of Slovakia, adding that in Bratislava there are as many as 1,500 Jewish people.

However, in the most recent census, conducted in May 2001, only 218 Slovaks declared their ethnicity to be Jewish. This apparent reluctance to stand up and be counted as a Jew might have something to do with the stigma the ethnic label still carries in Slovakia.

A survey conducted by the Markant agency released in January 2001 shows that 37 per cent of respondents would disapprove if their daughter decided to marry a Jewish person.

When asked how they would react if a Jew decided to move into their neighbourhood, 19 per cent of those questioned said they would be against it. In Bratislava, the figure was 7 per cent higher than the national average.

Observers identify several reasons for the persistence of anti-Semitic feeling in Slovakia, of which longstanding religious differences are often cited as the most significant.

"[Anti-Semitism] is based on a very strong tradition, greatly influenced by Christianity," said Franek. "There is also jealousy, both intellectual and material, and in the case of Slovaks it is also a matter of ignorance."

That "jealousy" can be seen in a recent article in the Slovak neo-Nazi magazine Edelweiss that states: "No one in today's world has greater power than the manipulators of public opinion in America have at their disposal. These dozen people (and we know very well who they are) rule the American mass media with greater power than any other people in history."

The belief that as an ethnic group Jews have a disproportionate amount of influence in decision making is prevalent throughout Slovak society.

A survey conducted by the Bratislava-based Focus agency for the American Jewish Committee in September 1999 found that 53 per cent of Slovaks believe that the influence of Jews on global events is "too great". However, only 26 per cent felt the same about the impact of Jews in Slovakia.

Prejudice is also apparent in the everyday language of regular Slovaks.

"Anti-Semitism is deeply rooted in all European languages, including Slovak. Expressions such as 'greedy as a Jew' are very common and I must say, even I could make the mistake of saying 'unchristian interest rates' if I was not careful," said Franek.

While many Western countries have rid their vernacular of such racist phrases, political correctness has yet to arrive in Slovakia.

However, the illicit nature of Slovak anti-Semitism means that Jews seldom hear these comments. According to Franek, people tend to watch their language when they know they are with Jewish people.

"When Slovaks find out that a person is Jewish, they change completely. Suddenly they say things like, 'Well, even Jesus was a Jew,' and they even offer that person coffee - they become almost friendly. I must say I have never encountered any openly offensive or hostile reaction directly from strangers, and I make no secret about the fact that I am Jewish," said Franek.

But while Slovakia's Jews may choose to ignore the undercurrent of anti-Semitism in Slovakia, there are some who feel this prejudice needs to be addressed, along with all other forms of racial or ethnic intolerance.

"We should definitely fight anti-Semitism [in Slovakia]," said Daniel Milo, legal advisor for the NGO People Against Racism.

"There is currently no programme in Slovakia dedicated to stamping out anti-Semitism specifically. The government has an action plan for preventing all forms of discrimination, including racism, xenophobia, and anti-Semitism. I think there should be a campaign that would help destroy the existing myths about Jews," said Milo.

He points out that as a nation, Slovaks have not shown themselves to be particularly understanding about the interests of minority groups.

"There has always been a certain amount of prejudice against other cultures in Slovakia," said Milo.

"Any solution should focus not only on the Jews but on other groups as well. For example, the manner in which the Roma are talked about in the media is not good. Education may help in this respect," he said.