WITH pressure mounting from the European Union and other Western institutions on Slovakia to address the problems of its Roma minority, state officials appear ready to shoot the messenger before addressing underlying problems.
A report given to the European Parliament in late January by the New York-based Center for Reproductive Rights and the Centre for Civil and Human Rights in east Slovakia's Košice alleged that at least 110 Roma women had been sterilised against their will by Slovak doctors in recent years.
Responding to pressure from Western diplomats, Slovakia's deputy prime minister for minorities, Pál Csáky, quickly promised to investigate the matter, but also delivered to state prosecutors a criminal complaint against the authors of the report. 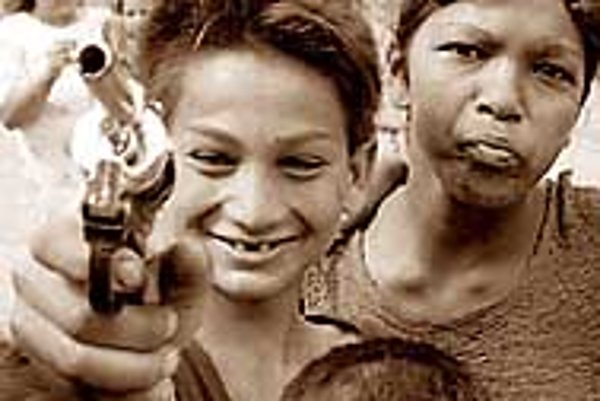 Font size:A-|A+
WITH pressure mounting from the European Union and other Western institutions on Slovakia to address the problems of its Roma minority, state officials appear ready to shoot the messenger before addressing underlying problems.

A report given to the European Parliament in late January by the New York-based Center for Reproductive Rights and the Centre for Civil and Human Rights in east Slovakia's Košice alleged that at least 110 Roma women had been sterilised against their will by Slovak doctors in recent years.

Responding to pressure from Western diplomats, Slovakia's deputy prime minister for minorities, Pál Csáky, quickly promised to investigate the matter, but also delivered to state prosecutors a criminal complaint against the authors of the report.

If their allegations are false, explained Csáky, the authors are spreading false alarm and libelling medical practitioners. If the allegations are true, criminal prosecution will also begin against the authors for not reporting the crimes to police.

"Filing this complaint is an outrageous attempt to deflect attention from the government's failure to prevent and investigate allegations of forced sterilisation and other reproductive-rights violations against Roma women," said Katherine Hall-Martinez from the Centre for Reproductive Rights.

While specific charges have not yet been brought and police continue to investigate the allegations of sterilisation, the situation has highlighted observations made in another January report, issued by the United Nations Development Programme (UNDP).

While not addressing specific instances of alleged or confirmed abuse, the UNDP report, "Avoiding the Dependency Trap", points out a number of fundamental flaws in how central and eastern European states have dealt with their respective Roma minorities.

"If current socio-economic marginalisation and inadequate education persist, in 10 to 15 years substantial parts of the labour force in Europe may be unemployable," said Andrey Ivanov, lead author of the UNDP report.

Across the region, explained Kalman Mizsei, head of the UNDP's European bureau, the status of Roma has been steadily deteriorating since the fall of communism.

Roma populations throughout the region have suffered disproportionately since 1989, often being excluded from education and employment opportunities, separated from the greater society, and locked in a cycle of poverty and state dependence.

Communist ideology discounted racial differences in addressing the Roma and instead focused on a class-based approach. As a result, social engineering projects under the 1948-1989 Czechoslovak communist government that required universal employment and school attendance greatly increased Roma education and employment levels.

The programmes, however, were not without negative consequences. Resettlement often meant breaking up Roma communities and eliminating existing social structures. At the same time, Roma were often given only the most menial positions in state enterprises.

Further, say activists, while Roma were forcibly integrated into the majority under socialism, the efforts often raised ethnic tensions, as majority communities grew resentful at what they saw as favourable treatment of groups that had always been on society's margins.

When communism fell and the large state enterprises collapsed, Roma were among the first to lose jobs and the last to be considered for private employment. Property restitution often left Roma individuals and communities without the legal right to live where they had been living, giving rise to ghettos, says the report.

At the same time, Roma children were increasingly excluded from quality schools and channelled into 'special schools' for the mentally handicapped.

While employment discrimination does play a role, said Ivanov, the disadvantages faced by Roma today are as much a product of past practices as current bigotry.

"Low skill and education levels suggest that hiring decisions by rational employers in competitive markets are unlikely to favour the Roma.

"However, the variety of interpretations of causes of unemployment also reflects the cyclical nature of Roma employment problems: lower competitiveness in the labour market today is often due to discriminatory practices and limited access to education in the past," reads the UNDP report.

Exacerbating the problem, say the authors, are socialist-era state benefit programmes that continue to offer little incentive for getting off state aid.

"Across central and eastern Europe, a disturbingly high share of Roma populations - in some cases [including Slovakia] as high as 70 per cent - derive their incomes primarily from state transfers such as child allowances, unemployment benefits, and pensions.

"These problems increase dependency on the state, creating a viscous cycle that further widens the socio-economic gap between Roma and majority populations with damaging social and political consequences," reads the report.

Bring in the funders

Although Slovakia and other countries with large Roma populations have enacted legislation to prevent discrimination and protect human rights, unofficial segregation has continued. Huge increases in outside funding for Roma-oriented programmes have so far achieved little marked success.

Some activists say that funders and local non-government organisations (NGOs) at times work at cross-purposes, and tend to focus too closely on the symptoms rather than the causes of Roma poverty and exclusion.

"Funders ask, for example, if a community has a cultural centre, but they don't ask the important questions - why the communities are separate, or why there is unequal access to education and jobs," said Jud Nirenberg, programme director for the Košice-based Carpathian Foundation.

"If a community centre is a place where people and activists can meet and make plans, it's a good thing. If it's a place only for social activities, it's nice, but it's not really serving its function," he said.

Nirenberg, who has been involved in Roma programmes in the Czech Republic and Slovakia since 1991, explained that the easiest projects to find funding for are Roma cultural or musical programmes, but these do little to address root problems in Roma communities.

"Organising cultural and folk events, for example, doesn't combat any existing stereotypes. Slovaks already know that the Roma are good musicians. The government and funders have taught Roma NGOs to do projects that are a waste of time," said Nirenberg.

A matter of trust

One problem consistently referred to by activists and organisations working with the Roma is the lack of trust in the communities towards outsiders - either majority communities or other Roma groups.

"Roma have little trust in intermediaries in general. Support for informal leaders, Roma and non-Roma NGOs, and Roma political parties is limited," said Ivanov. In addition, there has traditionally been little Roma political involvement.

Despite being Slovakia's second-largest ethnic minority behind Hungarians, the Roma are not represented in the country's parliament. Slovakia's main ethnic Roma party, the Roma Civic Initiative (ROI) garnered only 8,420 votes in general elections last September, although the country's Roma population is estimated to top 400,000.

But because of rival ethnic parties, fractures between different groups, and a required minimum vote to receive a parliamentary mandate, political analysts see little chance for national success for ethnic Roma political groups.

"Given the number of Roma in Slovakia and their demographic characteristics - the high proportion of children under 18 and their low literacy rate - it appears almost impossible for even a single Roma party to cross the 5 per cent threshold for parliamentary representation," said Michal Vašečka from the IVO think-tank.

Nonetheless, political involvement on the local level has offered a few bright spots. Local elections in December, for example, brought for the first time in Slovak history the election of a Roma mayor and Roma town council to the eastern Slovak village of Bystrany.

Even this presents pitfalls, however. Neither Bystrany's new mayor, František Pačan, nor anyone on the nine-member council has progressed beyond primary education. While they had all received crash courses in public administration from the Košice Civic Institute prior to elections, none have any experience in public service or managing an office.

Despite the Slovak government's hanging threat to prosecute the authors of the sterilisation report, there are some signs that the government is beginning to take Roma matters seriously.

After coming under heavy criticism from Roma groups and the government's top advisor on Roma affairs, Klára Orgovánová, for its plans to address Roma problems in October, the coalition New Citizen's Alliance (ANO) party is preparing a new project, due to be presented to parliament in the near future.

The project, explained ANO head Pavol Rusko, results from months of discussions between cabinet officials and Orgovánová, who had called ANO's earlier plan to move Roma issues from deputy PM Csáky's portfolio to the Culture Ministry as "the risky work of naive and ambitious gamblers."

"I appreciate the constructive approach of Ms Orgovánová, with whom we have found a common accord. The project incorporates several opinions and good solutions," said Rusko.

Among the proposals are plans to establish a Roma Institute, which would operate in some 600 mainly isolated Roma villages and settlements, analysing and seeking funding for concrete projects as well as working directly with local administrative bodies to solve specific problems.

Activists are more pessimistic, however, pointing to deteriorating conditions among Slovak Roma and the lack of incentives for breaking the poverty cycle.

"You can't motivate people to do something that bears no fruit. You can't get someone to look for a job when he knows he can't get one," said Nirenberg, adding that little can be accomplished as long as formal or informal barriers prevent the Roma from accessing education and job opportunities.

"The fact that there is a Roma NGO sector [in Slovakia] is a sign of progress, but there aren't many others," he said.