Hundreds turn out for peace demonstration

ANTI-WAR demonstrators in Bratislava marched in protest against war in Iraq, adding their voices to millions of others in similar protests around the world.
The event, attended by around 1,000 people, was organised by the initiative Not In Our Name as part of the international day of anti-war protests February 15.
The turnout was tiny compared to similar gatherings in other capital cities, leading some participants to point out the lack of publicity before the event. 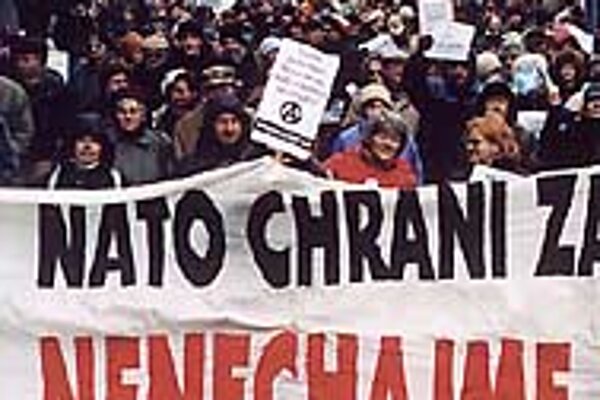 Font size:A-|A+
ANTI-WAR demonstrators in Bratislava marched in protest against war in Iraq, adding their voices to millions of others in similar protests around the world.

The event, attended by around 1,000 people, was organised by the initiative Not In Our Name as part of the international day of anti-war protests February 15.

The turnout was tiny compared to similar gatherings in other capital cities, leading some participants to point out the lack of publicity before the event.

"If there had been any information in the media about the protest, more people would be here," said Marta Hubová, 51, a nurse.

None of those asked had found out about the demonstration from the Slovak media; most turned up because they had seen posters.

Despite the presence of different interest groups - including young anarchists and ageing communists - most of the participants could best be described as regular Slovaks. Many said they showed up in the freezing weather because they believed a military attack against President Saddam Hussein would be wrong.

"I'm against the war in Iraq because I don't think it is a solution," said student Jitka Tereková, 21.

The demonstration was not only about war, but also about Slovakia's involvement in any possible military action. On February 7, the Slovak parliament voted to send an anti-chemical unit of 75 soldiers to the Persian Gulf by the end of February to assist in the event of war. The government also agreed to open its land and air space to US troops.

Opinion polls have consistently shown that the majority of Slovaks are against the deployment of their soldiers in the Middle East, and this sentiment was expressed by many during the anti-war demonstration.

"I think this is a war [planned by] Satan. We should send our MPs who voted for the deployment of Slovak soldiers to Iraq," said Elena Krajcerová, 62, a retiree.

Many people present held home-made banners displaying slogans such as 'We don't want an aggressive Slovakia', 'Bush and Dzurinda, you are like Hitler', and 'Slovak chemists, don't become mercenaries'.

And there were also flags - Iraqi, Palestinian, but mostly Slovak - waving in the icy breeze. A bomb fashioned from a plastic Coca-Cola bottle and suspended from a fishing rod hung over the heads of the protesters.

The demonstration started at 14:00 at Námestie Slobody (lit. Freedom Square), where several speakers from different backgrounds addressed the crowd. Representatives of the Not In Our Name initiative spoke, as did catholic priest Anton Solčiansky, who at the end of January started a petition opposing war in Iraq.

"God's will is say no to war!" said Solčiansky in his speech. "[In this case] we must listen to God, not to people," he added.

Solčiansky's stand was in line with the official position of the Slovak Catholic Church.

"Despite the complexity of international relations and the evil of terrorist attacks, international authorities must use all existing peaceful means for the fight against such methods and seek the way of reconciliation, knowing that violence leads to further violence," read a statement from the Slovak Bishops' Conference published in late January.

Sohel Ghanan, a representative of the Arab community in Slovakia, followed Solčiansky.

"The Iraqi people never gave up their fight against Saddam Hussein. The West supported Hussein in the past. Why did it not act then?" Ghanan asked the crowd.

While Ghanan acknowledged the need for regime change in Iraq and called the democratisation of the country 'inevitable', he declared military intervention was not the way to go.

"Foreign tanks are not a good transport vehicle for democracy," he said.

Activists of the Not In Our Name initiative read an open letter they had written to Prime Minister Mikuláš Dzurinda. Among other arguments against Slovakia's involvement in a US-led attack on Iraq, the authors mentioned the EU's objections to any action without a UN mandate. They said they thought Slovakia's stance might negatively impact the country's accession to the EU, planned for 2004.

"We are afraid that the European Parliament (EP) may not approve our entry into the EU [if we continue supporting the US]," states the letter.

This comes only days after MEP Jan Marinus Wiersma, special envoy to Slovakia in the EP, said during a visit to Slovakia that EU candidate countries should have been wise enough not to contribute to the division in Europe by taking a clearly pro-US stand.

The reading of the letter was interrupted by occasional yells calling Dzurinda and Foreign Minister Eduard Kukan servants of the US.

After about half an hour the crowd started moving through the city, occasionally shouting slogans such as 'Peace on earth' and 'Not in our name'. The procession was calm and peaceful; there was no need for police or medics during the entire event.

Activists from the Initiative For a Referendum on Slovakia's Entry Into NATO, whose spokesperson Eduard Chmelár also attended the demonstration, used the pacifist event to collect signatures for their petition, seen by some analysts as an effort to block the country's integration into NATO, planned for 2004. They need to collect 350,000 signatures in order for a referendum on Slovakia's NATO entry to be called.

The crowd ended its journey at Rybné námestie with fewer participants than at the start, due to the cold weather. The demonstration was followed by further events: The Food not Bombs NGO handed out free soup and a concert of classical music wrapped up the day of anti-war protests in Bratislava.