FOLLOWING a separation that lasted over a year, the Slovak National Party (SNS) and the Real Slovak National Party (PSNS) look ready to reunite and start what their representatives hope will be a broad integration of nationalist parties.
At a joint press conference on February 21, SNS leader Anna Malíková and PSNS boss Ján Slota announced that most regional branches of the two parties support the idea of putting the party back together.
"Slovakia needs one strong national party, which will defend the interests of [ethnic] Slovaks," said Malíková. 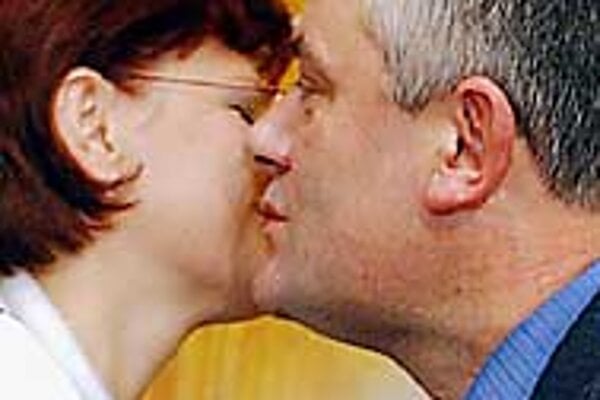 At a joint press conference on February 21, SNS leader Anna Malíková and PSNS boss Ján Slota announced that most regional branches of the two parties support the idea of putting the party back together.

"Slovakia needs one strong national party, which will defend the interests of [ethnic] Slovaks," said Malíková.

The SNS was formed in 1990 and the PSNS was created in October 2001 by former leaders of the SNS, after a faction was expelled from the party for voicing their opposition to party boss Malíková's perceived use of undemocratic methods in an internal election in December 2000.

"She's a crazy cow. She should go see a psychiatrist," Slota said about her at the time.

The relationship between the two parties have been far from friendly since then. In April 2002 Malíková said that Slota was a nouveau riche Slovak who was only after money.

"If I went to a meeting with Slota, it would be like spitting in the eye of all Slovaks living in regions with 30 to 50 per cent unemployment," Malíková said.

In the spring of 2002 the two parties nevertheless held negotiations about the possibility of presenting a common candidates' list for the September 2002 parliamentary elections. The talks ended in fiasco. Malíková offered Slota and the other PSNS members such low positions on the candidate list that they did not have a hope of reaching parliament. Opinion polls showed the two parties together would gain 15 seats at the most, and most of the PSNS members were placed below 140 on the list.

The talks between party heads took place in a tense atmosphere. "[Malíková said that] if I refused [her offer], she would break two chicken eggs on my head and that would only be the start of it," said a shocked Slota after the meeting. "We were all glad we got out of there alive," he added.

The parties ran in the elections independently, and both failed to reach the 5 per cent limit needed to get into parliament. The PSNS won 3.65 per cent of the vote and the SNS won 3.32 per cent.

Public support for the parties has not changed much since then. According to a survey by the Public Opinion Research Institute of the Statistics Office (ÚVVM) released on February 19, the PSNS enjoys the support of 3.7 per cent of Slovaks and the SNS of 3.3 per cent.

With elections to the European Parliament (EP) just over a year away, the parties want to be sure they will make it over the limit this time around.

"We expect to run as one party in these elections," said SNS spokesperson Vladimír Dobrovič, adding that the process of PSNS and SNS integration is expected to be concluded soon.

"The definite decision will come at the SNS and PSNS party congresses, which will take place in April," Dobrovič said.

It is not known who will become the leader of the reunited SNS, and a fight for the top job seems likely.

"The question of who will fill what positions has not been dealt with yet. These will be addressed during the preparation of the party congresses," said Dobrovič.

And the integrators are not planning to stop at unification. In the words of Malíková, "the SNS wants to create a broad platform for national politics in Slovakia."

As such, the parties are holding negotiations about possible forms of collaboration with other like-minded politicians.

One of these is Ivan Gašparovič, head of the Movement for Democracy (HZD). The HZD was formed shortly before the 2002 parliamentary elections by dissatisfied members of Vladimír Mečiar's Movement for a Democratic Slovakia (HZDS).

Gašparovič said he would be happy to form some kind of alliance with the unified nationalists.

"We have held talks with representatives of both [the SNS and PSNS] and we discussed certain principles and a system of cooperation, so the timeframe [of HZD integration] does not have to be too distant," said Gašparovič.

Despite good results in pre-election surveys, the HZD also failed to reach parliament, and according to the ÚVVM study it is currently supported by 2 per cent of the population.

As part of a new alliance, the united nationalist parties might support Gašparovič in an effort to run for president in 2004.

Gašparovič said the HZD has not yet decided on this issue, and no one has officially proposed him as a candidate. However, he did not rule out accepting such a challenge if nominated.

"It would depend on the conditions under which that happens," he said, adding: "If we formed an alliance [with the PSNS and SNS] I would definitely want to have their support."

Gašparovič also hopes to collaborate with the newest caucus of independent MPs in parliament, former members of the HZDS led by Vojtech Tkáč (see short, this page).

The HZD announced that it would like to see the new caucus advocating its own interests in parliament. Gašparovič is not ruling out the possibility of Tkáč's group becoming a part of the current consolidation of nationalist parties.

"It is possible," said Gašparovič.