DESPITE a surprise compromise at the end of February, Slovak labour leaders and employer representatives have not yet agreed on final amendments to the country's labour code, to be presented to parliament on March 12.
After months of bitter discussions, Slovakia's umbrella Confederation of Labour Unions (KOZ) and the Association of Slovak Employers (AZZZ) managed to settle most of their disputes over the amended law, but were unable to agree on the final point - the nature of employee representation in firms.
"Employers are still leaving this question open, and are proposing a number of variations," said Juraj Blahák from the KOZ, after talks broke down on March 5. 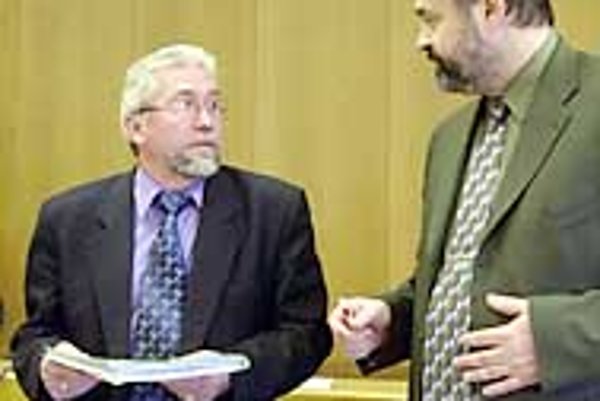 Font size:A-|A+0
DESPITE a surprise compromise at the end of February, Slovak labour leaders and employer representatives have not yet agreed on final amendments to the country's labour code, to be presented to parliament on March 12.

After months of bitter discussions, Slovakia's umbrella Confederation of Labour Unions (KOZ) and the Association of Slovak Employers (AZZZ) managed to settle most of their disputes over the amended law, but were unable to agree on the final point - the nature of employee representation in firms.

"Employers are still leaving this question open, and are proposing a number of variations," said Juraj Blahák from the KOZ, after talks broke down on March 5.

According to Blahák, among other variations the AZZZ has proposed allowing workers to elect representatives to corporate bodies, rather than having unions appoint them. The KOZ wants the situation to remain as it is, with unions choosing who represents workers' interests.

"None of the proposed solutions are any good. I think that [the proposals] are outside the framework of the amendments, and would limit the rights of unions and infringe on the free right to organise," said Blahák.

The latest impasse comes only five days after the disputing sides found compromise on most of the proposed legislative changes, but amid continued warnings from union leaders of a general strike if their conditions are not met.

After talks on the amendments continuing from late last year failed to yield any results, the KOZ on February 26 announced it had gone into crisis mode - the organisation's last administrative step before calling a general strike. Unions still had at least eight major objections to the updated law, particularly minimum wage scales tied to educational level and workplace safety standards.

While pledging to continue negotiations, government representatives discounted the strike warning, and criticised labour leaders for politicising the issue.

"Their [threat] is a completely futile attempt to bring the situation to a boil, and we are not going to address it," said Labour Minister Ľudovít Kaník after the KOZ announced its move into crisis mode.

"I think that the unions should understand that better results come from negotiations and not from generating pressure on social partners. We are interested in a constructive agreement that will benefit everyone," said Kaník.

"We face a situation in which the possibility to negotiate with the government is at an end," said KOZ head Ivan Saktor on February 26.

"To put it in other words, we are now pregnant with a strike, and later, when we are in the ninth month, we will give birth to it," he said.

After marathon talks on February 28, however, the council announced they had agreed on all but one of the KOZ's objections to the law (see box, this page).

If the compromise agreement passes, unions will give up the right to halt production for safety concerns, but will still be allowed to carry out occupational safety inspections. Unions will also keep their minimum wage requirements, but the six-tier wage scale will be based on job description rather than academic degree.

"We are satisfied with the compromise we managed to find and we praise the attitude of social partners," said KOZ vice president Peter Gajdoš after the February 28 agreement.

The compromise was also welcomed by the AZZZ, which said it would seek parliamentary approval of the new law as soon as possible, and Slovak government representatives, who said the agreement proved the value of the tripartite council.

"Only those who do not perceive reality can say that we ignore social dialogue. We have discussed changes to the draft labour code amendment at nine tripartite sessions and settled almost all controversial issues," said Kaník.

Labour leaders, however, say they are not yet ready to stand down. Unions will continue negotiations on the last disputed point but will keep their strike threat hanging until their proposals become law.

"We will maintain our crisis state until the labour code has been signed by the president in a form we have agreed to," said Saktor.

"If the government changes the terms of the law, we will announce a strike," he said.

C: Employment of spouses banned.
P: Businessmen/women can employ spouses in their company.

C: Employees with university degrees cannot be ranked in the lowest wage tariff category.
P: Employees will be classified according to job description, not educational level.

C: Workers earn four weeks of paid leave per year; employees with over 15 years of employment get an additional week. Employees working in unhealthy or dangerous conditions get additional paid leave.
P: Unchanged

C: Employees can be fired only for serious violations of work discipline and after several warnings.
P: Firing employees for unsatisfactory work results is simplified after a preliminary notice from the employer.