IN THE elementary and middle school of Jarovnice, a village with the largest Roma settlement in Slovakia, unique talents are flourishing under the guidance of art teacher Ján Sajko, 45. The artwork by his Roma pupils has won awards in many international art contests around the world. However, finding jobs for these talented youths remains a huge challenge, which is not helped by the changing attitudes of Roma and non-Roma alike.
Few white people ever go to the settlement in Jarovnice, where the majority of the inhabitants are Roma (3,000) and where non-Roma are a minority (700). Sajko is an exception. For 16 years he has worked as an art teacher at the all-Roma elementary and middle school in the village.
"He was like a second father to me," says Martin Kaleja, 18, one of his former students. 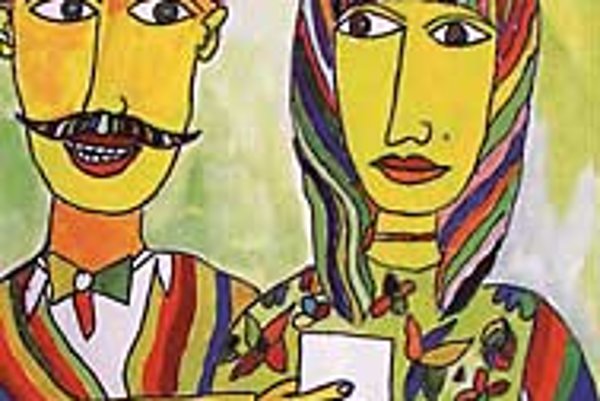 Font size:A-|A+
IN THE elementary and middle school of Jarovnice, a village with the largest Roma settlement in Slovakia, unique talents are flourishing under the guidance of art teacher Ján Sajko, 45. The artwork by his Roma pupils has won awards in many international art contests around the world. However, finding jobs for these talented youths remains a huge challenge, which is not helped by the changing attitudes of Roma and non-Roma alike.

Few white people ever go to the settlement in Jarovnice, where the majority of the inhabitants are Roma (3,000) and where non-Roma are a minority (700). Sajko is an exception. For 16 years he has worked as an art teacher at the all-Roma elementary and middle school in the village.

"He was like a second father to me," says Martin Kaleja, 18, one of his former students.

When Sajko started working in Jarovnice, the school was attended by both Roma and non-Roma pupils. With excitement, he recalls the discovery he made at that time: "I noticed that the Roma pupils used colours in a completely different way from the other children. I realised that these were not the colours of children from central Europe; these were colours of Asia, of Indian temples. It's a miracle that these children have preserved this heritage within them in spite of the depressing environment in which they live."

The first thing a visitor notices when entering the school is indeed the vibrant colours of the large paintings that cover the walls. Many of the motifs they show come from Roma history and legends. Also displayed in the corridors of the school are the awards Sajko's pupils have won and photos of trips to exhibitions of their own work in European cities.

"I think that the opportunity to take the kids out of this environment and show them something different is very important," Sajko says.

"They experience culture shock when they go to cities and meet other people. All they know from here is that 'we are Roma and we don't know anything. We don't believe in ourselves and then there are gadžovia [non-Roma]. Then suddenly they realise that the world is multicoloured, and that people from different cultures can meet and appreciate each other".

His students agree: "Visiting Vienna was a fantastic experience," Martin Kaleja recalls. "I saw something new. I could be proud and say that I had been there too. Here in Jarovnice, people are so closed in by the idea that they can only be safe here, that if they go elsewhere they will be defenceless. When I was in Vienna, I realised that you have to work on yourself to open yourself up."

Some of the children's artwork is currently on display in the Slovak National Museum in Martin, and there are other exhibitions planned for France and Germany.

Sajko uses different methods to inspire his pupils. There is no time pressure, and each student works with different themes. Roma music plays in the classroom, often serving as inspiration for motifs.

"Look at that boy's painting," says Sajko. "He paints green hair. A non-Roma child would think that impossible. Here, everything is possible. It's extraordinary."

While everything seems possible in cascades of colour, the reality of completing secondary education and finding work is not so easy for these kids.

In the Jarovnice settlement there is nearly 100 per cent unemployment. Apathy and passivity reign, and problems like alcoholism, drug abuse, usury, and a high rate of teenage pregnancies are common. Very few of the students continue on to high school, largely because their parents are unwilling to pay travel expenses. Many Roma believe there is no point in being educated, since they won't get a job anyway.

"We often have to work hard to convince parents that further education is a good thing because unfortunately their kids can't find work anywhere," says the principal of the school Jozef Bugna, 47. "Martin Kaleja went to the high school of arts and studied to be a carver, but nobody will hire him, and the main reason is that he is a Roma from Jarovnice."

Sajko agrees: "The children are very often victims of their parents. Even if there are no jobs now, one day the situation must change. The real problems are in the settlement, in the homes of these children. Only when a child sees his parents go to work every morning and make a living will his interest for secondary education increase. As long as the child sees that there is money to be made from card games and usury, nothing will change. This is the greatest contradiction between what we are trying to achieve and tell the kids and what society tells them. We tell them to be active, to work. Society pays them for being passive: Stay at home and you will get more money. It's an abnormal situation."

The school currently has 713 Roma students and there is not enough space. There are plans to build an additional building, but finances have not been forthcoming. Principal Bugna says that despite the high number of organisations working to help the Roma in Slovakia, he has not seen any improvement in the school.

"There is a lot of talk about education for the Roma and a lot of money coming from abroad," he says. "We need to build to have more space and we have been writing to the Education Ministry for 10 years about this. Where is the money that is supposed to be for the Roma? If the money went directly to culture and education and not to foundations, it would be used more effectively."

Observers say creating employment opportunities for Roma youth who do finish school is an enormous challenge. With that in mind, Sajko dreams about a "Roma art chain" run by non-governmental organisations (NGOs). Emphasising that he is not a businessman but a schoolteacher who intends to continue working with children, he says he would like to see a series of simple warehouses set up, where Roma could sell their pictures and sculptures.

"I have been talking about this for years. They call me a dreamer, but I work with kids here and I haven't seen any real change," says Sajko.

"[NGOs] come and do activities for a week but everyone seems to be playing in their own backyard and the solution of the fundamental problem - employment - continues to evade us. People go to Africa and come home with exotic souvenirs, something that is different. And we have these people right here in central Europe and we denigrate them. We have taught them not to work. We have to change this vicious circle. I'm convinced that one day people will buy the [Roma] souvenirs solely for their artistic quality."

He believes that creating such an opportunity in the depressed environment of the settlement would set an example for other communities - and not only for Roma but also for non-Roma.

"The people who look down on the Roma would be surprised to see what riches they possess inside of them," he says.

In spite of poor health and many other work offers, Sajko is determined to continue his work in Jarovnice.

"When we exhibited in Sabinov, a non-Roma teacher came into the gallery with her students," he recalls. "She looked at the paintings and told her pupils, 'Look at this! This is how to paint. Look at those colours!' That was probably the first time ever those Roma children had heard someone using them as an example. They had stars in their eyes! That is why I work here. It's for that feeling. You live for feelings really. That is what keeps me here."