Tragic stories that go on living

WHAT makes ballads attractive to both the audience and researchers is their emotional content and their exceptional stories that are full of dramatic events.
75-year-old Soňa Burlasová has dedicated 30 years of her life to researching Slovak folk music. Her most recent publication is called Slovak Folk Ballads (Slovenské ľudové balady, Scriptorium Musicum, 2002).
The largest expansion of Slovak ballads took place between the 16th and 18th centuries. Burlasová has collected around 6,000 of these songs, preserved via oral tradition until modern days, but this book, her seventh, is only a modest selection of 267. 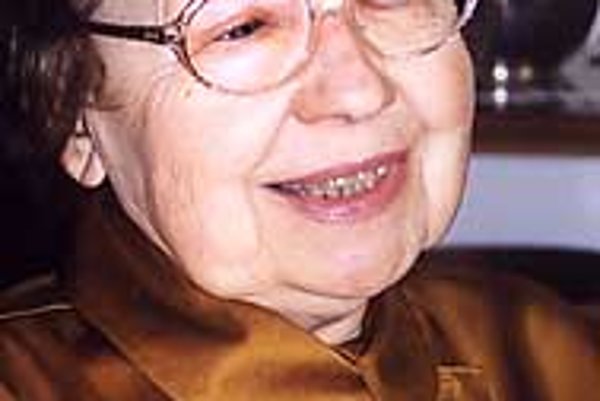 Font size:A-|A+
WHAT makes ballads attractive to both the audience and researchers is their emotional content and their exceptional stories that are full of dramatic events.

The largest expansion of Slovak ballads took place between the 16th and 18th centuries. Burlasová has collected around 6,000 of these songs, preserved via oral tradition until modern days, but this book, her seventh, is only a modest selection of 267.

Her research has shown that ballads are an important part of Slavic culture - and that the Slovaks, Czechs, Poles, and Ukrainians all have a balladic tradition. Burlasová has also found that the ballads known in this region might have come all the way from Germany, Scandinavia, and even Great Britain. This musical dissemination probably happened thanks to travelling musicians, salespeople, craftsmen, students, and soldiers who have moved across Europe over the last few centuries.

According to Burlasová, most folk music genres describe the everyday life of people; their work or their relationships to each other and to nature. However, ballads take up topics that are unusual and exceptional, and their aim is to present the moral codes of the time. They often give insight into people's behaviour in times of crisis, in situations that question people's ethics.

She has found in her fieldwork that most singers of Slovak ballads are - and have always been - women, because the traditional time for singing was when doing household work such as sewing, weaving, or the preparing of feathers for blankets and pillows. It was also customary to perform ballads at weddings and other family gatherings.

The stories of ballads mostly take place in villages; city life and the nobility rarely feature. Love is the most frequent theme, seen from every angle. The songs speak of courting, secret relationships, illegitimate children, and tragic love stories that end in death or suicide.

Another favourite topic is family affairs, such as envy between siblings and the complicated relationships between parents and children.

According to Burlasová, in most ballads the mother is the dominant and most decisive person in all the conflicts, pointing to the strong matriarchal traditions of the region.

Other topics featured in ballads are historical events, like the wars with the Turks. Violence crops up a lot, with many ballads about suffering during military service and murders committed by robbers. The story of legendary hero Jánošík (Slovakia's Robin Hood) is told in several different versions and warns of betrayal. Many of the stories have melodramatic endings, with people drowning in rivers or being killed by an accidental gunshot.

A small group of ballads shows how people deal with magic and superstition, life after death, and supernatural powers. With Slovakia being a strongly Catholic country, some ballads have taken their inspiration from the Bible, and describe the life of Jesus or the expulsion from Eden.

The recording and categorising of folk music has a long tradition in Slovakia. The first collection of ballads was published in 1835 and many others have followed, the most recent being Burlasová's 2002 collection. But, as she says, there is still work to be done, because new ballads are being composed all the time.

The Slovak Spectator recently spoke to Burlasová about her life's work.

The Slovak Spectator (TSS): How would you characterise Slovak ballads?

Soňa Burlasová (SB): Above all Slovak ballads are characterised by their themes, which are rarely found in the ballads of the surrounding countries. Bandit themes are frequently to be found, for example, dominated by the idealised Slovak hero Jánošík, and we have very few religious themes, compared to Slovenia and other countries.

Another interesting fact is that the ballad has survived here longer than in Germany and some Nordic countries.

TSS: Can you explain briefly the development of Slovak ballads?

SB: We assume that the main expansion was from the 16th to the 18th century. Before that, there were general ceremonial and working songs, but the fate of an individual in a song was not described. The period when the individual came into the spotlight was the baroque era.

TSS: You say in your book that some ballads were collected from Slovaks living in Hungary and Yugoslavia. Do the people there tend to preserve their traditions better than their fellow Slovaks who live in Slovakia do?

SB: Yes, they do. They managed to preserve some of their ballads in their earlier forms. This is mainly the case with Hungarian Slovaks, who are more isolated [than other Slovaks living outside of Slovakia].

TSS: How and where did your research take place?

SB: I was doing research during the 30 years I was working at the ethnological institute.

I visited various places. In some, the tradition is so alive that it's very easy to find somebody who will sing for you. The family often comes to join the singer, and the neighbours too. In other villages, you can barely find anyone who knows any ballads. And if you do, after several minutes you realise that the person is repeating the same thing over and over again.

One of the places where the tradition is most alive is the [central-eastern] Horehronie region. Others are in the northwest of Slovakia, Kysuce and Orava, and Gemer in the southeast of Slovakia. In general, ballads are still preserved in more isolated municipalities. Various folk bands try to revive them as well.

TSS: What surprised you the most during your research?

SB: I would say the way a song settles inside the singer - a bit like sediment - and then suddenly pops out when the opportunity comes up.

I remember one woman who was singing songs that used to be sung as part of a certain spring custom. She was singing them, one after another, as she remembered them. My colleague, listening to the recording later, said she thought it was somewhat chaotic - what the woman sang - with no beginning, no ending, and constantly changing. My colleague was not able to distinguish the piece's individual parts. I showed her where the different parts ended and began, since [after many years of experience] I can easily hear the individual songs.

TSS: What are modern ballads about?

SB: They are mostly about things that really happen. For example, in the Záhorie region [northwest of Bratislava], they talk about accidental shootings during hunting. I was surprised that these topics are being renewed, that ballads with these themes are still created.

TSS: Do you also sing ballads yourself?

SB: No, I don't. I read them from time to time. But I admit that there are some that always make me shiver when I return to them after a certain time. Those are mainly the ones about family and magic. They are so strong. I admire the folk wisdom that managed to recast the stories into such poetic form.

"Iba ho zotnime
a sebou vezmime!"
"Let us chop it down,
And take it with us!"

Prvý raz zaťali,
íverčok vyťali.
The first time they cut,
They cut out one splinter.

Druhý raz zaťali,
do krvi preťali.
They cut a second time,
They cut to blood.

"Neni som ja drevo,
drevo javorovô,
"I am no wood,
no wood of the maple tree,

ale som ja dievča
z mesta richtárovo.
I am a girl,
From the town of the mayor.

Mamka ma zakliala,
by kameň ostala,
Mother put a spell on me,
Turned me into stone,

Ja som zdrevenela
zeleným javorom.
I have turned into wood,
Into a green maple tree.

A tak jej zahrajte,
žiaľu jej dodajte!
And play for her,
Make her sad.

Toto sú husličky
z tej vašej Aničky.
This is a violin,
Made of your Anička.

Toto sú strunočky,
jej zlaté vlásočky.
These are strings,
From her golden hair.

Toto je sláčičok
z jej bielych ručičôk.
This is a bow,
From her white hands.

Toto sú kolíčky,
jej biele prstôčky."
These are pegs,
From her white fingers."

Keď matka slyšala,
ku oknu bežala.
When the mother heard [them]
She ran to the window.

Však ja ho dosti mám,
že Aničky nemám."
I have enough of it,
Since I lost Anička."