Museum in a garret

"GUESS what this was used for," Ladislav Janech asks a visitor to his museum, while handing her a wooden pin and a loom-like tool made out of thin sticks. The visitor seems puzzled: The pin is too big to fit through the narrow gaps between the sticks for it to be any kind of a weaving instrument. She gives up. 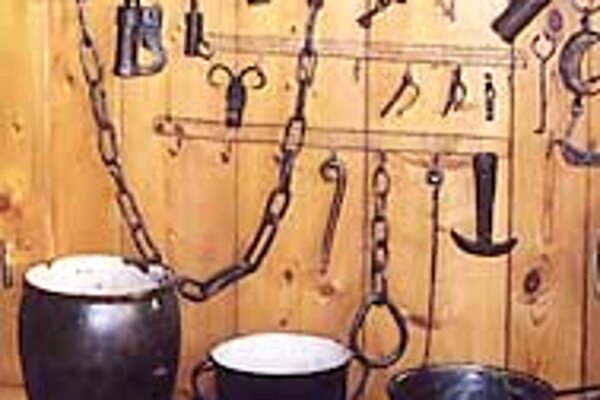 Font size:A-|A+
"GUESS what this was used for," Ladislav Janech asks a visitor to his museum, while handing her a wooden pin and a loom-like tool made out of thin sticks. The visitor seems puzzled: The pin is too big to fit through the narrow gaps between the sticks for it to be any kind of a weaving instrument. She gives up.

"It's a tool for making pasta," Janech explains. "You lay a square-piece of thin dough on it and then roll it with the pin [into a caterpillar-like shape]. The pieces of straw leave a notched design on it."

This pasta-making instrument is one of more then 2,000 artefacts Janech has collected over the last 33 years. He exhibits them in three rooms in the garret of his family's house in the village of Považská Teplá, near the northwestern town of Považská Bystrica.

His museum includes archaeological findings, a coin collection, traditional tools and a brief family history. The unorthodox, homely atmosphere, where one can touch the exhibited objects and hear an interesting story about almost every one of them has attracted not only locals but also foreign visitors. There have been 3,500 visitors since 1988. Most have been Slovak students, but there have also been Japanese, Namibians, Israelis, and Americans.

Janech, 55, studied to become a watchmaker, but he currently works at a water utility. Coins started to fascinate him at the age of 10 and gradually he became interested in history in general.

The father and son duo built the garret's first room in 1970. When it was full, some five years later, they built the second. Janech built the third room with his sons in 1988 after his father died.

"That one is also becoming full, but there is no more room to grow," he says.

Janech collected most of the objects himself, and others were brought by his colleagues or people who visited the museum. A few he made himself, like a wooden nativity scene and a snail decoration on a tree-root. Some things he saved before they were destroyed or thrown away, like a 400-year-old Bible and some significant cast-iron pieces.

The archaeological findings in his collection come mainly from the surrounding area. Janech discovered nine sites while exploring with a local archaeological club. Two of the sites, located just a few meters from his house, date from the Stone Age. One interesting find is a 4,500-year-old ceramic sculpture that resembles a Moravian Venus. It was named Tepľanská Venus, after the village.

His collection of 1,270 coins from around the world ranges from the times when cocoa and coffee beans were used as a means of payment, right through to 1992, when the Czechoslovak Federation split.

Among the traditional artefacts, many of which belong to his family, visitors can see original folk costumes, furniture, many kinds of vessels, silver, a spinning wheel, a loom, and a number of working tools. There are mousetraps, beer and lemonade bottles with labels imprinted into the glass, and wooden shoes.

Janech never studied history in an academic environment, but spends almost all his free time studying it. He reads books and talks to experts, and sometimes he gives lectures at nearby high schools.

And, Janech says, despite the fact that there are hundreds of artefacts densely exhibited, "if somebody moved one thing I would notice it."