My life with beavers

TOMÁŠ Hulík's obsession with beavers started six years ago, when as a student he accidentally fell into a beaver's den during a walk in the forests near the Morava river.
The beaver whose den he fell into was the dominant female in the area, and he was so taken with her that he decided to film her for research purposes, something few people had succeeded in doing before.
He named the beaver Ráchel, because the name resembles the Slovak word rachla, which describes the clumsy way beavers get into the water. 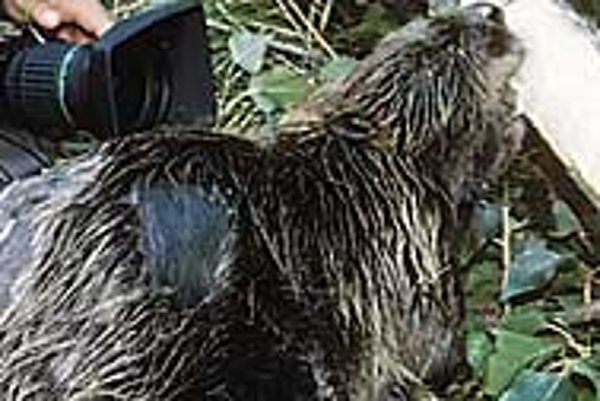 Font size:A-|A+
TOMÁŠ Hulík's obsession with beavers started six years ago, when as a student he accidentally fell into a beaver's den during a walk in the forests near the Morava river.

The beaver whose den he fell into was the dominant female in the area, and he was so taken with her that he decided to film her for research purposes, something few people had succeeded in doing before.

He named the beaver Ráchel, because the name resembles the Slovak word rachla, which describes the clumsy way beavers get into the water.

While Hulík carried out his research, Ráchel became so used to his presence that after some time she let him come to within arm's length. Once, she even let him touch her. Because of the unusual circumstances, what followed was a dream come true for every natural scientist: Not only did Hulík get the chance to observe and film the behaviour of these shy animals, but he also ended up with an unusual new friend.

Ever since Hulík discovered evidence of beaver activity in the forest area near Bratislava, he has spent more than 1,200 nights outdoors. What started as a project for university has developed into a mission, and up until now, Hulík has shot about 10,000 pictures of his beavers. He has also produced a feature-length documentary movie about them.

Entitled simply Hulik und die Biber (Hulík and the Beavers), the film is unique in Slovakia, not only in its theme but also in its production cost and the digital equipment used: The expenses for the documentary were equal to the budget for a long feature film in Slovakia. Because Hulík could not find enough money to finance his project at home, he had it produced by the state-run Austrian Television, in cooperation with the companies Cosmos Factory and Docstar.

"Our film cost Sk12 million [290 000 euro] and in Slovakia there is no institution that would be able to pay that. It would have been useless to look for money in Slovakia or the Czech Republic. Slovak Television is dead and not interested in this kind of project at all. But even if it had the money, it would probably have given us two weeks to make the documentary, and filming for the [Austrian TV programme] Universum took 18 months," explains Hulík.

The documentary was broadcast on Austrian television, and has not yet been bought by a Slovak television station.

The success of the movie has resulted in an offer from the Czech edition of National Geographic magazine, which is interested in publishing a story about Hulík's encounters with the beavers.

"You cannot 'get into' National Geographic, they have to find you. And hopefully, my pictures will also make it to the international edition later on," Hulík says.

Of beavers and men

Until recently, beavers were only filmed in captivity. Because their behaviour in the wild is different, Hulík's film footage is very valuable to the scientific community. He has filmed beavers above and below water, and what is extremely rare, also in their den. Among the most stunning sequences in the movie are pictures of Ráchel giving birth to five youngsters. Despite her protective instincts, she let Hulík film her offspring.

"When Fedor Čiampor, Andy Šutek, and I started working with beavers [as university students], there were almost no pictures of beavers available. It was a rare animal. First we took pictures, then later the photography turned into filming. And as I don't like dry academic essays, whenever I had to make a presentation about my research [in university], I used either the photographs or the film footage as illustration. So for many people, I became known as a beaver expert, and they recommended me when people were looking for pictures of beavers. In fact, most of the material available in Europe for the last three or four years is by us," says Hulík.

One of the reasons for the lack of information about beavers in Europe is the fact that the animal was practically extinct from the second half of the 19th century until the 1970s, when it was reintroduced. In Europe and North America, beavers were hunted for fur, meat, and castoreum (a strong-smelling substance produced in beaver glands), which was used by perfumers and in traditional healing.

The beaver was reintroduced to central Europe by Austrian zoologist Johanna Sieber from the Konrand Lorenz Etological Institute in Vienna 30 years ago. So in one sense, the beavers that have settled in the Záhorská nížina lowlands outside Bratislava are all immigrants from Austria.

Another reason why the beaver became extinct, and is still endangered today in many places, is that people fear beavers will devastate nature and they kill them as a precaution. Beavers cannot survive near regulated water streams. They need to build dams and make pools, because water is their main living environment, providing them with food and protection. In addition, many gardeners, foresters, and farmers see beavers as pests because they destroy trees that may have been planted for a reason.

"There are between 300 and 400 beavers in Slovakia now and they don't really have a natural enemy. As a result, they sometimes cause damage when they fell trees or flood places by building their dams on ponds or small rivers. But people shouldn't complain about beavers; it shows a lack of knowledge and respect. For 150 years the beaver was extinct in Slovakia, and now that it has come back, it has found a completely changed environment. It is only adjusting nature to its needs," says Hulík.

Sometimes beavers are endangered by natural catastrophes, such as the Danube floods in August 2002. In a very touching scene at the end of the film, Hulík goes searching for his beavers in an inflatable canoe. And even though Ráchel and her young offspring had very little chance of survival, he found the mother and two youngsters near their home.

But most of all, beavers are endangered by people and their disrespect for the environment.

"I have heard of plans for a bicycle path and later a highway bridge to be built in the area where the beaver family lives. That would seriously endanger their habit. The area around the river Morava is one of few flood-plain forest (lužné lesy) areas in Europe and it provides everything that the beavers and other species living by the water need."

Even though Hulík has finished his documentary, he will continue to keep an eye on the fate of his beavers, as he enjoys going back to where they live.

"It is very relaxing for me. Often it is more pleasant than spending the evening in one of Bratislava's pubs. It is as if you entered a different world, it's like watching a 3D movie live."

Currently, the 26-year-old filmmaker is working on a documentary about shepherds in the Tatra mountains and the animals they encounter, like wolves or bears. Another project Hulík is planning is a film with the working title Dracula, which will be shot mostly in Romania and will introduce the flora and fauna of the Carpathian mountains.

The decision to becoming a documentary filmmaker changes one's life dramatically. In order to capture exclusive pictures, Hulík has given up the comfortable life in the city, but he is willing to do so, because the experience and the pictures he gets in return are invaluable to him.