"IT REMINDS me so much of my childhood," a visitor in her late 60s said while looking at the paintings during an exhibition of works by Slovak artists that recently opened at Reduta in Bratislava.
"I can clearly visualize how we carried hay loaded high on a horse cart with all of us sitting on top," she said.
The 79 paintings of the exhibition show men harvesting crops, women raking hay, and young men playing traditional instruments or relaxing in a meadow while looking at geese. 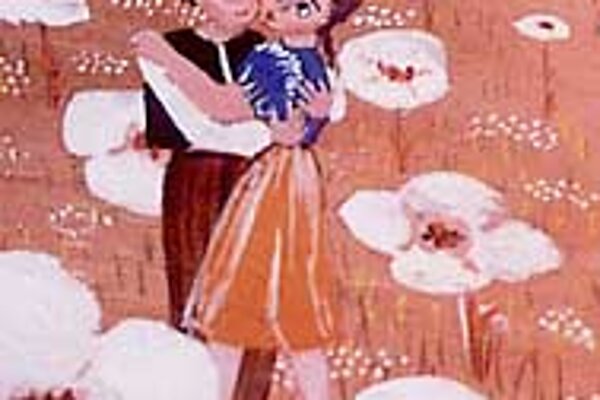 Font size:A-|A+
"IT REMINDS me so much of my childhood," a visitor in her late 60s said while looking at the paintings during an exhibition of works by Slovak artists that recently opened at Reduta in Bratislava.

"I can clearly visualize how we carried hay loaded high on a horse cart with all of us sitting on top," she said.

The 79 paintings of the exhibition show men harvesting crops, women raking hay, and young men playing traditional instruments or relaxing in a meadow while looking at geese.

The creators of these works are following a tradition established by the naive artists of the 20th century, known for their lack of professional training and their simplistic use of colour and form.

Two of the exhibitors, Juraj Lauko and his son Juraj Lauko Jr, are no longer alive. The third artist, Anna Jankovská, is 64. All three began to devote their lives to painting more actively after they had retired and their children had grown up.

The paintings in the exhibit, fittingly entitled Memories Of Youth, include images from the childhoods of the painters, only committed to canvas when they were much older. Even though they had always wanted to paint or to study painting it was not realistic for them to become professional artists because they needed to earn a living. So, instead, painting became a hobby for them.

"In the past, this kind of art used to be called 'primitive art'. Today, we seek analogies between a naive way of seeing and portraying reality, which is characteristic of the work these artists produced. [Naive artists] are usually of an older generation, gifted, but didn't have a chance to study art," says Katarína Kuzmová, the curator of the exhibition.

Juraj Lauko Sr, born in 1894, worked as a butcher, and the first works of art he created were sculptures made of hard grease. After moulding some other works from clay and plaster casts, he later switched to painting.

His son, Juraj Lauko Jr, discovered his father's paint brushes and canvases after he retired from his job as a refrigerator repairman. He decided to follow in his father's footsteps by painting life as he remembered it in his native village of Sarvaš, in Hungary.

Both Laukos received awards for their work in Slovakia and abroad, and according to Kuzmová, they are among the best non-educated artists in the country.

When Anna Jankovská was a mother and a working woman it was impossible to devote much time to painting. Twice a year, she says, she was able to find the time to sit down and paint. She would later give her works to her friends.

"You can imagine how much a woman must do after she comes home from work. But I would always find time to paint during holidays, like at Easter I would paint Easter eggs and hang them on blossoming tree branches that I had put in a vase," Jankovská says.

After working as a road engineer, the native of Žilina started to devote more time to painting around 1993. She has always been faithful to tempera (pigment mixed with egg yolk), but the materials she applied the colours to have changed. Starting with stones and eggs, she then switched to painting on wood. Now she uses tempera paints on paper, and she thinks that she has painted around 200 pictures in this way.

Even though Jankovská has been retired for some time now, she says she still cannot devote all her time to painting.

"First, I have to do what is needed in the garden and around the house, and only after that is done can I sit down and paint for two weeks without a break," she says.

For her, painting is mainly about relaxation. During the process she returns to her youth; she hears ballads and songs in her head and she is reminded of old customs. In almost all her paintings you can see people in folk costumes, flowers, and country houses with red roofs. Essentially, when she paints she has an image of her grandparents and their times in her mind.

"As a child, I used to spend holidays at my grandparents' house in Púchov. They had a flour mill, a sawmill, a huge farmyard, and fields. And we, their grandchildren, followed them around as they pulled up turnips or bound up sheaves of hay. Nobody forced us to work. But when it was time to go to harvest, we all went. We got on a horse cart and went to the fields; nobody stayed home. For a snack we had a glass of fresh milk and a slice of bread," Jankovská remembers.

When she was four or five, her parents bought her a tiny set of watercolours, probably the cheapest available at the time, called Pelikánky. She remembers colouring in pictures with them. She also remembers her mum saying, "If we want to have a rest from her let's just give her something to paint."

Similarly, as nothing has curbed her desire to paint, she is not restricted by the frame of the picture. Many of her paintings spill out of the frame and continue outside of it.

"It started spontaneously one day, when I was painting sunflowers, and it seemed to me that the frame abruptly cut their natural flow. So, I painted them on the frame," says the winner of last year's naive art competition in Kovačice.

Even though the exhibition Memories Of Youth was held at the Reduta for only five days (from March 13 to 17) almost all the 68 paintings that were for sale were sold.

"During the opening, the pictures didn't tell me anything because I could see they were not painted by professionals," said a middle-aged man, who returned to the exhibition one day before its closing.

"Now, I want to buy some, because I found out how much they reminded me of my childhood, but the ones I wanted are all gone."