KDH: Gays should not be teachers

HOMOSEXUALS in Slovakia say they were concerned about the future of an anti-discrimination law after one ruling-party MP said gays were not suited to certain jobs.
Christian Democratic Movement (KDH) MP Anna Záborská said recently that although her party was against discrimination of all kinds, she thought that it was "questionable whether [homosexuals] are able to fulfil all occupations", such as teachers.
Her party's boss, Pavol Hrušovský, who is also the speaker of parliament, later said that his party continued to oppose the passage of an anti-discrimination law that would expressly ban discrimination on grounds of race, gender, physical handicaps, religion, or sexual orientation. 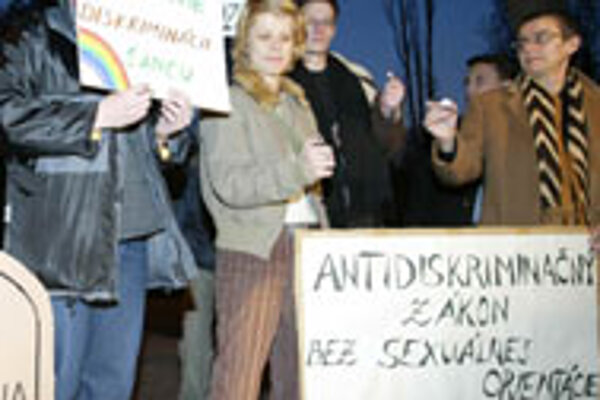 Font size:A-|A+
HOMOSEXUALS in Slovakia say they were concerned about the future of an anti-discrimination law after one ruling-party MP said gays were not suited to certain jobs.

Christian Democratic Movement (KDH) MP Anna Záborská said recently that although her party was against discrimination of all kinds, she thought that it was "questionable whether [homosexuals] are able to fulfil all occupations", such as teachers.

Her party's boss, Pavol Hrušovský, who is also the speaker of parliament, later said that his party continued to oppose the passage of an anti-discrimination law that would expressly ban discrimination on grounds of race, gender, physical handicaps, religion, or sexual orientation.

Such legislation, however, is required of Slovakia as a future EU member. Western officials have repeatedly reminded all EU candidate countries that by the scheduled May 2004 entry date, all of them should have adopted anti-discrimination legislation.

The KDH has argued that a special anti-discrimination law is not necessary because the Slovak constitution already secures non-discrimination for all of its citizens.

"We insist that a special law is not necessary," Hrušovský said.

Záborská said that her party saw homosexuality as a physiological defect, and although she added that gays and lesbians should not be discriminated against, she thought people who identified themselves with groups that take part in love parades could not be trusted working with children.

"If a person identifies with a group that organises such events, he cannot be responsible for children," Záborská said.

Responding to those statements, Slovak homosexual groups said they were not going to give up their fight for the anti-discrimination legislation.

Mariana Šípošová, spokeswoman for the Inakosť (Otherness) organization that represents Slovak gays and lesbians told The Slovak Spectator: "We consider such statements to be misleading and unacceptable. Certainly we will not remain passive and we will fight for the law."

Šípošová also said that the community was "very concerned, yet not surprised, that a high-standing representative from the KDH, is in fact saying that discrimination based on sexual orientation is grounded".

The KDH has a record of expressing anti-homosexual rhetoric, which observers attribute to the political nature and the voter base of this conservative Christian party.

The anti-discrimination legislation was blocked from reaching parliament once before, under the last cabinet when the draft was rejected by the KDH.

The KDH's then-justice minister, Ján Čarnogurský, said that as long as he was leading the justice system, homosexual partnerships were not going to be put on the same level as marriages between heterosexuals. The Justice Ministry continues to be in KDH hands, and is now led by Daniel Lipšic.

But homosexuals insist that the law is needed and say that many gays are subject to workplace discrimination.

"The law is necessary. The [negative] experiences of Slovak homosexuals can be seen in last year's [Inakost] survey, which clearly showed that the sexual minority is subject to discrimination," Šípošová said.

In October 2002 Inakosť conducted a survey of 251 homosexual respondents, of which 65 per cent were men and 35 were women. Nearly half of them said that they kept their sexual orientation secret from their parents.

Šípošová added that there was a threat that if the law is not passed, some young homosexuals would consider leaving the country.

"There is always a risk that minorities who feel their rights are not sufficiently represented at home will move to live somewhere where these rights are guaranteed," she said.

Other observers reminded politicians that the passage of the law was necessary as part of Slovakia's obligations to the EU.

During her recent visit to Slovakia, the European Commission's director general for employment and social affairs, Odile Quintin, pointed out the lack of anti-discrimination legislation in Slovakia.

Only recently, a mention of homosexuals in a clause prohibiting workplace discrimination was taken out from a draft of the new labour code.

Michal Vašečka, an analyst with a Bratislava-based Institute for Public Affairs think tank, said it was important for there to be at least one law that would expressly secure non-discrimination to minority groups, including homosexuals, be it the anti-discrimination law or the labour code.

However, he was sceptical about whether sufficient support for the anti-discrimination law could be found in parliament.

"If the anti-discrimination law does not include homosexuals, then there is a high chance that it will pass. But I fear that if the mention of sexual minorities remains in the draft, the legislation may be blocked again," Vašečka said.

Deputy prime minister for minorities Pál Csáky has recently sent the draft to ministries to collect their comments, and a senior political body, the coalition council, agreed on March 25 to create a commission composed of representatives from all the ruling parties to see whether agreement on the legislation can be reached.

Some ruling parties, such as the liberal New Citizen's Alliance (ANO), has already said it will back the anti-discrimination law.

In addition, opposition MP Sergej Kozlík from the Movement for a Democratic Slovakia (HZDS) told Slovak daily Pravda recently that he could imagine himself supporting the law once it reached parliament.

The KDH, however, reiterated that no special laws were necessary and said that if mistakes are found in existing laws the party was prepared to fix them rather than approving the anti-discrimination bill.

Hrušovský said: "If we find an element of discrimination [in existing laws], we are prepared to approve changes to eliminate it."