HUNGARIAN oil refinery MOL has taken control of Slovak refinery Slovnaft, concluding one of the largest stock deals in Slovakia to date.
On March 28 MOL officially acquired a 32 per cent stake in Slovaft, which, in addition to a 36 per cent stake bought in 2000 and a 2 per cent stake later acquired from small shareholders, brings the Hungarian company's share to just over 70 per cent.
"I think this was the most important transactions in the history of Slovakia and Hungary," said Zsolt Hernádi, chairman of MOL, at a press conference in Bratislava on March 28. 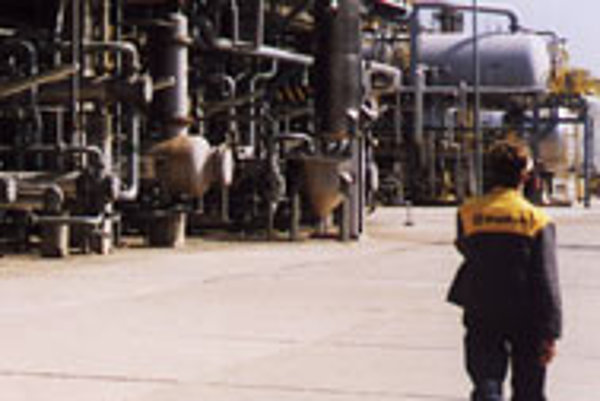 "I think this was the most important transactions in the history of Slovakia and Hungary," said Zsolt Hernádi, chairman of MOL, at a press conference in Bratislava on March 28.

"Two Slovak companies have made, as far as we know, the largest Slovak foreign investment to date," said Slavomír Hatina, chairman of the board of Slovnaft, Slovbena, and Slovintegra.

Hernádi also stressed the pioneering nature of the transactions: "This is, as far as we know, the only cross-border transaction in central Europe," he said.

"Today, we have the largest refinery capacity in the region," Hernádi said about the deal, which he characterised with many superlatives.

Despite the recent transactions, both companies are to retain their individual market identities.

"Slovnaft is the best-known and most-respected brand in Slovakia and the Czech Republic, and MOL is known in Hungary and Romania, so both brand names will be preserved," said Hernádi.

The transaction was agreed upon in November 2002, following MOL's two-year presence in the company. It first had to be approved by the antimonopoly authorities in both countries.

According to Slovak legislation, because it has acquired more than 66 per cent of shares in a joint stock company, MOL is obliged to announce a public offer for the purchase of shares from the remaining minority shareholders, an issue still causing much debate.

In such a case, the minimum price to be offered per share must equal at least half of the net assets of the company divided per share or the average price of shares for the last six months, whichever of the two is higher.

MOL representatives say that share prices were artificially increased by speculation on the stock exchange in order to increase the six-month average, which will be decisive since the price calculated by the other method is lower in any case.

"As soon as we got approval [from the antimonopoly offices] the market suddenly started reacting. The price of shares can only go up by 10 per cent each day, and the price started increasing by exactly that much," said Hernádi.

Finally, on March 20, after the share price had increased by around 30 per cent over the previous week, more than 200,000 shares of Slovnaft were sold on the Bratislava Stock Exchange.

"We wrote a letter to the Bratislava Stock Exchange (BCPB) and the Financial Market Authority (ÚFT) in which we indicated that this transaction was carried out with the intention of raising the six-month trading average," said Hernádi.

"Before you make such an accusation, you have to be convinced that it is grounded. We are convinced it is because the transaction is not in line with previous trading on the stock exchange and has no real economic basis," said Hernádi, adding that Slovnaft had not recently announced any new information about its economic results.

The March 20 sale was realised by the J&T Financial Group, which along with the company Istrokapitál holds around 15 per cent of Slovnaft shares. The companies will be among the minority shareholders offered the chance to sell their shares to MOL.

However, J&T spokesperson Maroš Sýkora said that the 200,000 shares traded were not part of the 15 per cent stake, the daily Národná Obroda reported. J&T Securities realised the transaction, but allegedly sold the shares based on directions from a client, whose identity cannot be disclosed. Sýkora also said J&T does not know who the purchaser was, since the deal was anonymous.

J&T said at a press conference on March 26 that the average price should be set at Sk1,540 (37.30 euro) and because it should include both anonymous trading and direct transfers, such as the one between Slovintegra and Slovbena on one side and MOL on the other. In that transaction the average share price was around Sk2,200 (53 euro).

However, ÚFT representatives say this calculation method is not accurate.

"Direct transfers are not included in the calculation [of the average price]," said Marek Kačmár, spokesperson for the ÚFT, the SITA news agency reported.

In response, MOL has asked for the March 20 transaction to be annulled, but authorities have yet to decide on the issue.

"We will do everything possible to have this transaction declared invalid," said Hernádi.

According to Kačmár, on March 31 MOL had already delivered its written proposal on the offer to purchase shares to the ÚFT, which should decide on the matter within seven days.

The price included in the offer is not known. However, Hernádi said small shareholders, which hold around 2 per cent of shares, have nothing to worry about.

"It is our duty to be fair to long-term shareholders, for whom our offer will certainly represent good earnings if they decide to sell their stakes," he said.