Not a monopoly, not yet a market

DESPITE the ending of the fixed-line monopoly enjoyed by Slovakia's dominant telecoms provider, Slovak Telecom (ST) is continuing to thwart market liberalisation, say alternative operators.
According to Slovakia's Association of Telecom Operators (ATO), ST has not been negotiating openly with competitors on seeking interconnected telephone networks and has continued to block competition on the market.
"The negotiations are complicated, drawn out, and nobody really knows when [network] interconnection will come," said ATO head Vladimír Ondrovič in early March, after talks between ST and alternative operators broke down. 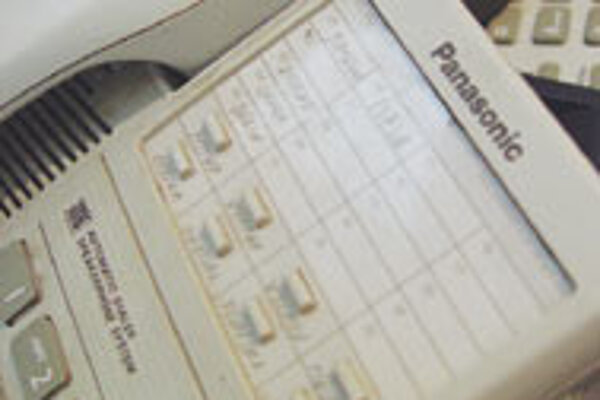 According to Slovakia's Association of Telecom Operators (ATO), ST has not been negotiating openly with competitors on seeking interconnected telephone networks and has continued to block competition on the market.

"The negotiations are complicated, drawn out, and nobody really knows when [network] interconnection will come," said ATO head Vladimír Ondrovič in early March, after talks between ST and alternative operators broke down.

"At this time, nothing exists specifying the price at which [operators] can fix interconnection," said Ondrovič.

Slovakia's telecoms monopoly officially expired in January 2003. However, an updated telecoms law that should have guaranteed an open market was vetoed by President Rudolf Schuster last summer, and the previous parliament was unable to override the veto before the end of its term in August.

Parliament's failure to get the new law through meant that ST's monopoly would end as planned, but that the dominant provider would not be obliged to rent out its local loops - the final connections with homes and businesses - to competitors until a new law came into effect.

Although the cabinet on March 19 passed a draft policy on electronic communication, parliament still has to pass an electronic-communications law in line with EU norms before the country's accession, expected next spring. The new law should take effect in January 2004.

While Slovakia's market-regulating Telecoms Office (TÚ) has already granted 14 licenses for fixed-line telecoms service, alternative operators say that without open negotiation with ST and the publication of the dominant operator's reference price - the basic rate at which networks are connected - they may be unable to begin offering service within the time required by their licenses.

Under the terms of the fixed-line licenses, operators must start providing service within six months of receiving a licence, in most cases by July.

But without knowing what ST will charge competitors for connecting different networks, alternative providers are unable to set their own price structures, and may not be able to come online before the summer deadline passes, they say.

"ST has to make possible the connection of networks, so that my clients can call the clients of ST," said Branislav Brezovič, head of GTS Slovakia.

"If I signed [ST's proposed contract], tomorrow I would be in jail. I cannot allow something that would pull the firm into financial risk," he said.

Officials from ST, however, counter that they are proceeding in line with the law and doing their best to protect the market and consumers in general.

"In no way is ST holding up negotiations. [The company] is prepared and is now working with five potential operators," said Ján Kondáš, ST vice president of communication.

"All five have their own ideas about the conditions of this contract. Because of that, it is not possible to negotiate on the contract publicly," he said.

In an interview with the weekly Trend, new ST president Miroslav Majoroš defended the company's practices and said that the technical infrastructures of ST and competing firms were not yet in place to ensure an open telecoms market.

"The unpublished offer allows us to negotiate with each interested party individually. With some, negotiations are going better, with others, worse," said Majoroš, adding that offering the same connection conditions to all operators "would be a liberalised market but with socialist conditions. Everyone gets everything equally, and the possibility of [operator] choice only obstructs the customer."

"When our network is only 84 per cent digital, we cannot immediately secure for all clients a simple selection of operators. In most cases I think alternative operators are not prepared enough technically," said Majoroš.

Representatives of the ATO, however, reject ST's claims. They say the company's moves are designed to put off open competition for as long as possible and are damaging to customers and the telecoms market as a whole.

"The heavy invectives from the side of the new ST president against the ATO and alternative operators are proof of the continuing arrogant behaviour of the monopoly operator, not only towards its own clients, but also towards its future competition in the area of voice service," said Stanislav Molčan, GTS marketing and business director, in a written response to Majoroš's comments.

The ATO has also been critical of the market regulator for a lack of power and budgetary independence. The TÚ is currently operated under the budget of the Transport, Post, and Telecoms Ministry, the same body that controls the state's 49 per cent stake in ST.

While officials from the TÚ say they would like to speed up the market's opening, their power to act on the matter is limited. The authority and independence of the office was due to be increased under last summer's failed telecoms law, and will not be adjusted until the law on electronic communications comes into effect.

"The TU is looking for ways to intervene. We have created two groups - technical and commercial-legislative - which are looking into the selection of telecoms operators and at the license of ST, in case we are able to intervene in a way that would speed up the process," said TÚ vice chairman Juraj Michňa.

Although the TÚ received ST's reference price in January, regulators say they are unable to participate in talks until the first contract has been signed.

"According to current legislation, the first interconnection contract has to be closed and one of the sides has to complain to us that [the contract] is discriminatory," said Michňa.

Although the TÚ has already said it would not strip licenses if companies were unable to begin operations by the deadline, the ATO remains sceptical, saying that the regulator has so far done little, even with the powers it has.

Lawmakers, however, say that questions over market openness and regulatory authority will be answered once parliament can agree on the law on electronic communication. Among the measures in the draft plan already passed by the cabinet are transferring the state's stake in ST to a different administrative body and increased budgetary independence for the TÚ.

"Unfortunately, the current law does not provide all the tools that would clearly specify the rules of the game on the market," said Milan Herman, director of the telecoms section at the Transport, Post, and Telecoms Ministry.

"The operators are bargaining and the citizens will have to wait for them to decide," he said.