THE INTEGRATION of Roma into Slovak society and ensuring equal opportunities for the minority are underlying this year's cabinet priorities in a strategy to help the country's troubled 500,000 strong Roma population.
The cabinet discussed the strategy at a meeting on April 2, and is expected to approve funding for concrete Roma projects later in the month. For this year the cabinet has freed Sk50 million (1.2 million euro) from the state budget for Roma projects.
But despite focused cabinet efforts to aid the Roma, since 1999 in particular, the lives of the minority have "not improved by one centimetre", said Ladislav Fizik, head of an umbrella organisation for Roma politicians called the Roma Parliament. 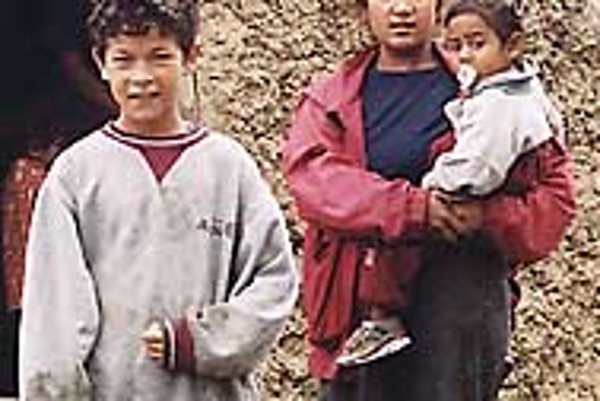 Font size:A-|A+
THE INTEGRATION of Roma into Slovak society and ensuring equal opportunities for the minority are underlying this year's cabinet priorities in a strategy to help the country's troubled 500,000 strong Roma population.

The cabinet discussed the strategy at a meeting on April 2, and is expected to approve funding for concrete Roma projects later in the month. For this year the cabinet has freed Sk50 million (1.2 million euro) from the state budget for Roma projects.

But despite focused cabinet efforts to aid the Roma, since 1999 in particular, the lives of the minority have "not improved by one centimetre", said Ladislav Fizik, head of an umbrella organisation for Roma politicians called the Roma Parliament.

He said the funds freed for improving the lot of Roma - whom he believes are among the country's poorest, least educated, and most discriminated against inhabitants - was far from enough.

"What is Sk50 million? Just look at how the Roma live. I think Sk1.5 billion should be allotted for solving Roma problems," Fizik said.

The cabinet appointee for Roma issues, Klára Orgovánová, agreed that the funds were "not sufficient", saying that "[the Roma] problem is growing disproportionately to the possibilities of the cabinet".

She pointed out, however, that in addition to the Sk50 million, individual ministries run several Roma-related projects from their own budgets, and that the cabinet plan also expects EU funds to be used for some Roma programmes.

Since 1999, the cabinet has given hundreds of millions of crowns to various Roma projects, including housing, education, employment, and social programmes. Through the PHARE fund, the EU has also contributed millions of euro to numerous development projects for the Roma.

Housing, however, remains among the worst problems faced by the minority.

According to cabinet statistics, there are 620 Roma settlements, primarily in the east of the country, where about 139,560 Roma live in ghetto-like conditions. Others live in run-down flats in the suburbs of Slovak towns and cities.

In the settlements, several families often live together in sheds built of wood or corrugated iron. They rarely have running water, heating, or electricity.

"[When visitors come to the Roma settlements they say] the living conditions are impossible, that this situation reminds them of the middle ages," said Fizik.

The Roma are also generally in poorer health than the majority population. The cabinet's strategy for the Roma - officially entitled Elementary Thesis of a Concept of Cabinet Policies in Integrating Roma Communities for 2003 - states that while the national average life expectancy of Slovak men is 66.5 years, Roma men live 54.5 years on average. Roma women on the other hand live 68.5 years, compared with 76.5 years for Slovak women in general.

EU officials have regularly pointed out that helping the country's Roma must become a priority for the Slovak administration.

The cabinet's 2003 Roma strategy acknowledges those demands, stating that "the integration of minorities and their coexistence with majority society is a condition for the successful functioning of Slovakia within the EU".

"Countries that have not completely solved the situation with their minorities have limited chances of succeeding in a united Europe. A productive integration, via political participation, education, and employment, is a precondition for a conflict-free coexistence. The price for delaying solutions would be high," states the document.

Orgovánová told The Slovak Spectator that the cabinet aimed to continue supporting development projects in spheres such as education, employment, housing, and tolerance towards Roma, so that "[Roma are accepted as] equal citizens of the Slovak Republic".

"The marginalised groups of the Roma population do not enjoy equal opportunities in comparison with the rest of the population," she said.

Roma politicians, meanwhile, are reminding the cabinet to keep to its promises.

"The Roma are hungry and without a vision for better life, and many have no hopes of finding a job," said Fizik.

"Money should be invested in development projects concentrating primarily on employment and education."

He said that a large number of Roma have got out of the habit of working, because many of them "haven't worked since [the fall of communism in] 1989".

While the national unemployment rate is currently above 17 per cent, there are Roma settlements in which 90 or even 100 per cent of the inhabitants are unemployed and live on social benefits.

The Roma's generally low education levels complicate their predicament. According to the 1991 national census, only 0.84 per cent of Roma completed secondary education. More recent numbers are not available.

Another problem the cabinet plans to address is the prejudice that exists against Roma among ethnic Slovaks.

Local media recently reported the ongoing court trial of two Slovak army professionals over racist statements against the Roma they are believed to have made in 2001.

Colonel Pavol P. and Major Peter M. allegedly said at a military seminar dedicated to minority-versus-majority issues that "97 per cent of Roma are unable to adapt and should be shot dead", according to the private TV channel Markíza.

Eliminating such racist attitudes is believed to be among the toughest tasks for the cabinet and the NGOs with whom the administration works in this sphere.

But until Roma see their lives visibly change for better, they say they will look at all cabinet strategies with scepticism.

"We are the poorest [people in the country] and we are beginning to think that no one is able to ease our misery," said Fizik.