DECORATED eggs are a sign that Easter is upon us. They are also a symbol of fertility and new life. In the past, girls used to present decorated eggs to boys after the boys had whipped them with wicker whips and doused them with buckets of water. 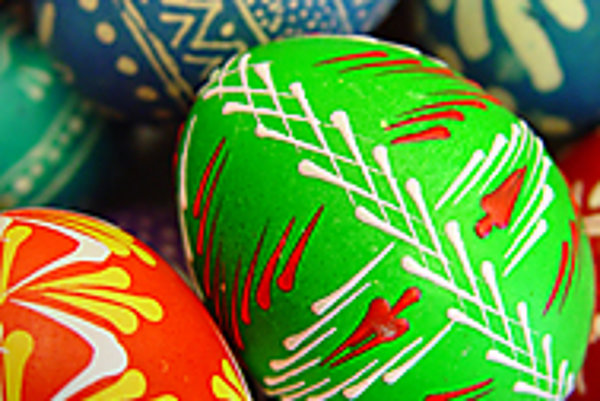 DECORATED eggs are a sign that Easter is upon us. They are also a symbol of fertility and new life. In the past, girls used to present decorated eggs to boys after the boys had whipped them with wicker whips and doused them with buckets of water (see Foreign Affairs).

Today, boys prefer to receive chocolate eggs, and decorated eggshells are really only used for decoration.

Despite the fact that girls no longer give boys decorated eggs, the traditional techniques of decoration are still in practice, and in addition, new decoration techniques have developed in different regions. The Centre of Folk Art Production (ÚĽUV) in Bratislava preserves the old decorated eggs and brings together people who still decorate eggs in the traditional ways.

"Boys and young men are no longer offered decorated eggs. [The old tradition] has become a rarity these days," says Anna Chlupová, an ethnographer at ÚĽUV. "That's why people have become more interested in this tradition. They have started to renew the traditional techniques and come up with new ones as well."

The mainly geometric and organic designs have remained, by and large, the same, and some decorators have returned to using natural colours. In the past, some women scratched poems into the coloured eggs, while today some have turned to abstract modern designs. For example, Viera Harmatová from Trnava dyes the eggs the natural way. First she boils them with onion skins, resulting in an uneven brown colouring. Then she draws on the egg with black ink.

According to Chlupová, about seven different traditional techniques were used in the past. Some have disappeared, some have been revived, and other new ones have developed. A rarity among the egg-decoration techniques is the use of copper wire to envelope the eggs in intricate designs.

Below are descriptions of the processes that are most used. (Note: Before decorating your eggs, prick a hole in both ends and blow out the yolk and white. Then wash and dry the egg.)

This technique is the one most commonly used. In batik, wax and dyes are used to colour the egg in two or more colours. Because of the repeated colouring it is also one of the most difficult techniques.

First, melted wax is applied to the egg with a pin or a small piece of metal tubing (like the one at the end of a shoe lace) secured to the top of a wooden handle or pencil. After the wax hardens, the egg is then dipped into the first and lightest dye. The places covered by wax remain the same colour as the egg and everything else gets coloured. When the egg dries, more wax is applied, and the egg is then dipped into a different, darker colour. The process can be repeated many times. At the end, the wax is warmed and wiped off with a flannel cloth.

This technique comes from western Slovakia. It has advanced so much that some decorators even manage to copy traditional embroidery patterns using modern machinery.

The egg is coloured first by dipping the egg into dye, including a type of dye specially produced for Easter eggs. Then, using a sharp tool - a knife, file, or thick needle - designs are scratched into the dye.

Traditionally, dough was used to paste dried and coloured swamp grass to the surface of the egg. The disadvantage of this technique was that it attracted moths. The grass and dough have now been replaced by cotton thread or straw stuck on using glue.

If you would like to use straw, cut stalks of straw into sections, split them in half lengthwise, and flatten them with a knife (moistening them might help). Then cut them into circles, strips, squares, or diamonds and paste them onto the egg.

Reminiscent of embroidery, perforation is a modern technique developed no longer than a decade ago. This technique, which results in a fragile lace-like design, has become one of the most popular decorative techniques.

Holes are drilled with a high-speed power drill. Then, patterns are painted around them with melted wax.

ÚĽUV's archive includes only the white-wax-on-white-egg decorations, but markets offer many other colourful options.

Originally developed in northern Slovakia, this technique is similar to the batik style, however the applied wax is coloured and not wiped off.

To make the coloured wax, ordinary wax crayons are mixed with melted candle wax, creating a pliable emulsion. The designs are created with the same tools as in the batik process.