THE SLOVAK parliament on April 10 approved the country's accession to the North Atlantic Treaty Organisation (NATO), leading supporters of a referendum on the matter to admit defeat in their efforts to force a public vote.
While a referendum on EU entry is required by law, no such vote is needed for the country to join NATO.
"I consider this historic decision to be the result of the country's top officials' efforts to ensure its safety, which it shall gain by entering the most effective collective defence body in today's world," said President Rudolf Schuster, who signed the treaty on April 15, thus concluding Slovakia's side of the accession process. 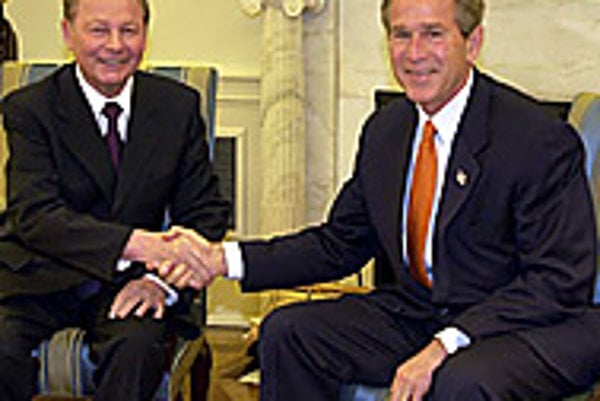 Font size:A-|A+0
THE SLOVAK parliament on April 10 approved the country's accession to the North Atlantic Treaty Organisation (NATO), leading supporters of a referendum on the matter to admit defeat in their efforts to force a public vote.

While a referendum on EU entry is required by law, no such vote is needed for the country to join NATO.

"I consider this historic decision to be the result of the country's top officials' efforts to ensure its safety, which it shall gain by entering the most effective collective defence body in today's world," said President Rudolf Schuster, who signed the treaty on April 15, thus concluding Slovakia's side of the accession process.

A total of seven central and eastern European countries received invitations to join NATO at the alliance's summit in Prague last November. Entry is planned for the spring of 2004.

Slovakia's neighbours the Czech Republic, Poland, and Hungary all became NATO members in March 1999. Slovakia's ambitions to join at that time were thwarted by the government of Vladimír Mečiar, in power between 1994 and 1998, which was seen as undemocratic and authoritarian by the West.

The change of government following parliamentary elections in the autumn of 1998 came too late, as the Czechs, Poles, and Hungarians had all received invitations to join at NATO's summit in Madrid in July 1997. Slovakia has been one of the leading candidates for entry since 1998.

Coalition and opposition MPs alike showed their approval for accession to the alliance. Out of the 150-member assembly, 136 MPs took part in the vote and an overwhelming majority of 124 voted in favour. Bohumil Hanzel, from the opposition party Smer, abstained from the vote.

The entire 11-member caucus of the Communist Party of Slovakia (KSS), the only parliamentary party not to have NATO membership included in its election programme, voted against entry.

"It's possible that NATO is contributing to the stabilisation of social inequality in the world, and I cannot agree with Slovakia's participation in the exploitation of the poor," said KSS MP Karol Ondriáš in the parliamentary debate.

"The KSS is against NATO entry. We see the future in a common European defence policy," said KSS chairman Jozef Ševc.

Representatives of the 19 current NATO members signed the accession protocols on March 26 in Brussels. In order for Slovakia to become a fully-fledged NATO member, all current members must ratify the country's entry. So far, only Canada and Norway have done so.

Slovakia was the first out of all candidate countries to vote on accession. KSS head Ševc accused parliament of trying to confuse citizens with its speedy decision making, so the public would not support a referendum on entry. Advocates of a public vote have now given up on further efforts to ensure a referendum would be held.

Since January, a group called the Civic Initiative for a Referendum on Slovakia's Entry into NATO, supported by a number of political and non-governmental organisations, has been gathering signatures on a petition calling for a referendum on the issue. A referendum would have to be held if the petition was signed by at least 350,000 people.

"Political elites are terrified of the prospect of a possible referendum. If they are really that confident that NATO entry will only bring advantages, they should have ensured support for these arguments in a fair referendum battle," said Eduard Chmelár, head of the initiative, adding that such arguments would probably not win if played out in the arena of public opinion.

However, parliamentary speaker Hrušovský said he did not believe that the majority of citizens opposed NATO entry, and that it was parliament's right to make the decision.

"Parliament had no reason to hold back. By approving entry into NATO, it was just using its constitutional right," he said.

The constitution states that even if a referendum were held on this issue, the results would not be binding for parliament, which would make the final decision.

Current research supports the opinions of both Chmelár and Hrušovský. According to a survey carried out by the Culture and Public Opinion Research Institute of the National Education Centre released on April 10, only 43.5 per cent of Slovaks support the country's entry into NATO, while 52.8 per cent are opposed.

At the same time, the research showed that only 66.5 per cent would attend a referendum on entry and a majority of those who attended would vote in favour of entry.

The referendum initiative was hoping to present the required number of signatures to the president by the end of March, but collecting them has proven more difficult than expected.

"Right now we have approximately 190,000 signatures. We were hoping it would be more," former justice minister and petition activist Ján Čarnogurský told The Slovak Spectator on April 11.

Čarnogurský said the low number could be because of misleading information from the collectors of signatures in the early stages of the petition, cold weather during the winter months, and the fact that the organisers were relying on volunteers.

"We have not given up completely but we are realists," said Chmelár, adding that further signatures would only be collected to make a point.

Observers are keenly watching the US Congress, whose approval is expected to seal Slovakia's fate in the alliance.

Following a 45-minute meeting between President Schuster and President George W Bush on April 9, Schuster's spokesperson Ján Füle told the SITA news agency that the US will most likely ratify the entry of all seven invited countries in June.