A dramatic approach to English

A GROWING number of Slovak teachers use drama to teach English and are anxious to spread the use of this technique across Slovakia and beyond.
Advocates of using drama to teach foreign languages say the technique brings the language to life. The students use the language in more open situations to engage their imagination.
This sets the structures, functions, and vocabulary in the students' memory and prepares them to use it in real life, the teachers explain. In addition, by taking on a role, the student can 'forget' their fear of the language and the learning process moves into the realm of the unconscious. 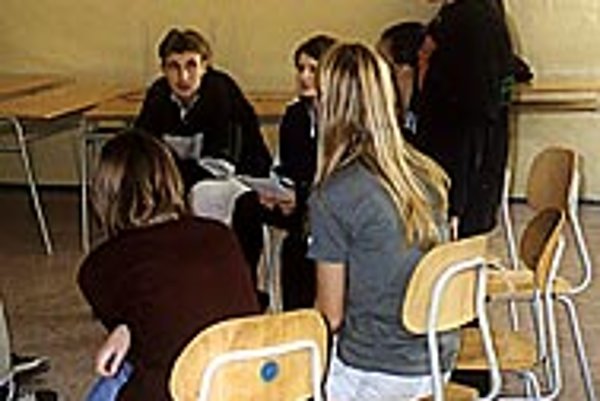 Font size:A-|A+
A GROWING number of Slovak teachers use drama to teach English and are anxious to spread the use of this technique across Slovakia and beyond.

Advocates of using drama to teach foreign languages say the technique brings the language to life. The students use the language in more open situations to engage their imagination.

This sets the structures, functions, and vocabulary in the students' memory and prepares them to use it in real life, the teachers explain. In addition, by taking on a role, the student can 'forget' their fear of the language and the learning process moves into the realm of the unconscious.

Daniela Bačová, a teacher at the department of English and American Studies at the University of Constantine the Philosopher in Nitra (UKF), runs the drama special interest group (Drama SIG) of the Slovak Association of Teachers of English (SAUA-SATE). The group has 90 members and organises a range of activities across the country, including training workshops, drama days, conferences, and drama festivals.

Bačová runs courses about how to use drama in the classroom with her colleague Andrea Billíková, another teacher from UKF who has been instrumental in widening the use of drama techniques in foreign-language teaching in Slovakia. Billíková originally discovered drama in education as a student of Bačová's and through later involvement in the Drama SIG.

Bačová says that although drama is used by some Slovaks teaching English, Slovak, and music, its use is not widespread.

"Drama does not fit into the prevailing information-based and authoritarian education system in our state schools, and therefore is not supported by the school management," she explains.

She believes that this lack of government support works as a disincentive for improving teaching methodology.

"Everything would be much easier if there was a proper teacher-development programme. Then it would be a normal and inevitable step for every teacher to take care of her own self-development," she says.

Nevertheless, the use of drama in English-teaching classrooms is on the same level as that in the surrounding countries, and there is a high level of cooperation between teachers in the field. There have been several projects involving teachers from Slovakia, the Czech Republic, Austria, Romania, Macedonia, and the UK.

One such project run by the British Council from 1999 to 2000 started with a week-long course for 27 teachers from Slovakia, the Czech Republic, Poland, Hungary, Latvia, and Lithuania. The teachers were introduced to drama by two British lecturers from Exeter University. They then created their own lessons using the techniques they had been taught and tried them out in classes, subsequently publishing them as the book As If..., which Bačová co-edited.

Staging for the public

One of the regular activities carried out by the Drama SIG are school festivals of English drama. These are held in Nitra, Žilina, and Košice, and have been running since 1999, funded by the British Council and Fulbright Commission.

The festival in Nitra is split over two mornings to allow space for all the participating schools from western Slovakia to perform. Over 200 students and 30 teachers took part in the two-day event this year, which ran from April 5 to 6.

The first day was given over to short performances of fairy tales or songs by children as young as seven, with older students performing longer productions on the second day.

This was the first time many of the children had performed on a stage, let alone spoken a foreign language in public. There was a buzz of excitement throughout the two days, as the plays were performed in front of a packed audience of other students, teachers, and parents.

The teachers believe that the performances help to build their students' confidence in using English.

"I think the children become much more confident. They are very happy to perform and show what they can do," says Jana Moravčíková from Mlynárce Primary School in Nitra.

Each of the performances at the festival was given feedback by a jury made up of teachers and students from UKF, including Billíková. She says the standard of the plays has grown since the first festivals.

"The schools are now much more interested in producing a professional-looking piece of drama," she says. "And they use the full range of lighting and sound effects available at the theatre. It was great to see that this year students were using the full range of drama techniques on the stage."

Billíková says she was also pleased that "teachers had found ways to dramatise textbooks. They had used passages and dialogues from the books or used drama to bring characters from textbooks alive".

The Drama SIG leader, Bačová, was impressed with the way the participants worked with the jury.

"I'm very interested to see how the students are eager to hear the jury's comments. It puts all the students and teachers together in one group on the basis of positive feedback and support. You can really see that they are interested in improving."

Two of the jury members, Andrea Černičková and Juliana Drudgová, both in their fourth year at UKF, say they were so impressed by the standard of the performances and the techniques that they had learned in their lessons that they would like to continue using them when they themselves become teachers. They have even thought of opening a private language school dedicated to this way of teaching.

Despite the enthusiasm of the teachers and students, some schools have been reluctant to allow their groups to take part. Several of the teachers say they were not given any support by their schools, and for some of the groups, only a small amount of help was given.

One teacher says that her group was not given a classroom to rehearse in, and had to use gymnasium changing rooms instead. Another teacher, Andrea Bogárová, says that her group of students from the Business Academy in Dolné Obdokovce prepared for their performance during their free time, and only got a small amount of money for props.

Nevertheless, she says it was worth the effort.

"I intend to use drama in the classroom [eventually]. I was encouraged by the course I did at the university. If I hadn't actually attended the seminars I wouldn't have started," she says.

Bogárová is a final-year university student and one of more than 100 students who have passed through the Bačová and Billíková's course at UKF. She has also attended one of the international drama conferences organised by the Drama SIG.

She and many others spoke of Bačová as their inspiration for becoming involved in drama.

"I've been using drama since I met Daniela [Bačová] four or five years ago. It was my first contact with drama techniques and I was very surprised how I could use them in school. I'm no actor, but my students are," says Milena Bobáňová, an English teacher for 12 years.

Bobáňová is keen to emphasise the academic value of drama in helping to improve the confidence of the weaker students in the group.

"I've got some very good students and some poorer students, and it is interesting to see that the poorer students are the better actors. This may be a way that they can experience English grammar and vocabulary," she says.

Despite events like the theatre festival, Bačová stresses that performance is only a small part of using drama in the classroom. Drama is also used to encourage students to think for themselves, and show them that the language they are learning is more than just a school subject but something they can use in real life.

"Drama is a process. It is important how you get into the product, [to experience] the 'pain' of searching. It is not just about giving and waiting for the students to [absorb the knowledge]," Bačová says.

Zoltán Brezina, a teacher of 23 years experience from Galanta, says that although he has no time to act out plays in his classes, drama is nevertheless an integral part of his teaching method.

"I think that drama is in every lesson. If you ask a student a question in English and he answers in English, it is a kind of drama because it is not natural to speak English among those who are not English," he says.

Billíková agrees: "Some teachers use [drama] without knowing it, especially when they use simple drama techniques such as mime, role-play, and simulations".

According to Bačová, drama in the classroom should not be limited to children.

"All age groups love to play. Drama techniques have one great advantage, you can adapt them easily to every language and age level," she says.

"For me, drama means that you bring an authentic situation to the classroom, you introduce a problem and ask the students to deal with it. Within the situation the students have to use language that is appropriate to the situation and have to realise the actual functioning of grammar, lexical structures, etc," she says.

Billíková adds: "Adults lose their fear of communicating; they overcome that barrier and they forget that they are using English. They consider it fun, and that is when there is a lot of learning happening."

Bačová says she is inspired to carry on her work by seeing the teachers she has worked with actually using drama in their classrooms. She hopes to find the time to write books on the subject to help spread the message further, and is looking forward to collaborating on more projects with teachers from abroad.