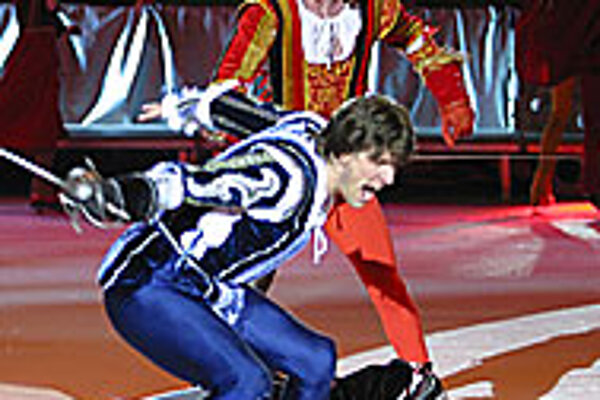 "IN ALL famous stories, you come across the theme of love. So, when we were choosing [the story for] our next [musical on ice] project, we decided to take the saddest but most beautiful of all love stories - Romeo and Juliet," says composer Boris Urbánek.

Urbánek, who had previously worked on the Mrazík (Father Frost) musical on ice, based on the legendary Russian fairytale of the same name, has now written the music for this production of Romeo and Juliet on ice.

This show, which premiered in Ostrava, Czech Republic, on April 17, is coming to Slovakia with seven performances at the Ondrej Nepela stadium from April 24 to April 27.

Like the well-known story on which it is based, the musical is set in Verona, Italy. To convey the idea of renaissance Verona, an impressive 13-metre-high set has been constructed, and the skaters are dressed in rich historical costumes. The two main characters are portrayed by Radka Kovaříková (Juliet) and René Novotný (Romeo), triple world champions in figure skating.

A highlight of this production of Romeo and Juliet will be fencing skaters, duelling it out with sabres and swords while actors perform on a stage specially constructed on the ice.

The songs for the musical were recorded by Czech pop stars such as Lucie Bílá and Kamil Střihavka, and the rest of the cast includes some other well-known names from the Czech theatre and music scenes.

"Working on Romeo and Juliet was difficult. The music is beautiful but I was limited by the plot," says folk singer Jarek Nohavica, the lyricist for the original music score.

Nohavica has composed music and written lyrics for other artists, and lately, he acted in the fictional music documentary Rok ďábla (Year of the Devil) that won the Czech Lion (Czech version of a Grammy award) for best music this year, among other awards.

"To think of lyrics for [Romeo and Juliet] that recalled the original wasn't easy. I wanted Shakespeare to be present in the text but I couldn't use his words. I wanted it to be my lyrics inspired by Shakespeare. And I had to write in such a way as not to insult Mr Shakespeare, which was a hard task to do because he's a classic."

In the summer, producer and director Jindřich Šimek plans to start work on German and English versions of the musical. Another hope for this Romeo and Juliet crew is to bring the musical to the stage in a theatre and perform it with a live orchestra.