Slovakia on air for the world

CELEBRATING its 10th anniversary this year, the international branch of state-run Slovak Radio - Radio Slovakia International (RSI) - has increased its broadcast languages from five to six by adding a Spanish section.
RSI started broadcasting on January 4, 1993, as a follow-up to the short-wave broadcast of Czechoslovak Radio. Its task is to present Slovakia abroad through programmes about current affairs, culture, sports, and other issues.
RSI now broadcasts in English, German, French, Russian, Slovak, and Spanish. In addition to short-wave broadcasts, its transmission can be heard via satellite and on the internet (see box). 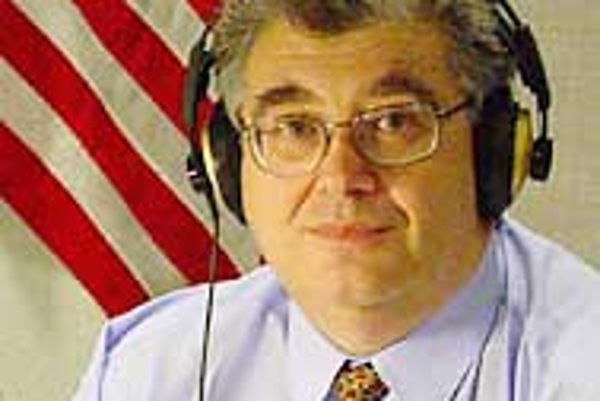 Font size:A-|A+0
CELEBRATING its 10th anniversary this year, the international branch of state-run Slovak Radio - Radio Slovakia International (RSI) - has increased its broadcast languages from five to six by adding a Spanish section.

RSI started broadcasting on January 4, 1993, as a follow-up to the short-wave broadcast of Czechoslovak Radio. Its task is to present Slovakia abroad through programmes about current affairs, culture, sports, and other issues.

RSI now broadcasts in English, German, French, Russian, Slovak, and Spanish. In addition to short-wave broadcasts, its transmission can be heard via satellite and on the internet (see box).

The different language sections partially coordinate their work, by agreeing on three news topics each day, but the content of the news is different in each language. A 30-minute show is aired in each language four times every 24 hours so that it can be heard in each time zone. Every week day the programmes begin with four minutes of news and then continue with topical issues.

One of the important objectives of RSI is re-broadcasting, which means that its programmes are aired by other international stations, such as Radio France International, Deutsche Welle, and the BBC. Together with the Czech Republic, Hungary, Poland, and Austria, RSI participates in a radio programme called Insight Central Europe, which is transmitted in all the participating countries.

The work of RSI is fully financed by the state, and the station has an annual budget of up to Sk70 million (€1.7 million).

In each of the different language sections there are five journalists, who travel around Slovakia to report the news from the whole country.

One of the most unusual language sections is the Slovak one, whose audience consists mostly of ethnic Slovaks living abroad. They often request very specific background information on political or other issues from their homeland. RSI reporters have even been asked to find lost relatives and research the history of a family.

The English section, headed by Oxana Ferjenčíková, a Slovak, broadcasts to North America, Australia, Central and South America, and western Europe. The only native English speaker in this section, Pete Miller from the UK, not only works as a journalist but also edits the English of his four colleagues.

The Slovak Spectator recently spoke to Miller about his work in his Bratislava office, the walls of which are plastered with hundreds of postcards sent in by listeners from around the world.

The Slovak Spectator (TSS): How would you describe RSI?

From listeners' letters we know that we reach all parts of the world. In the English section alone we received letters from 63 different countries last year. One of the difficulties international broadcasters encounter is that you cannot do market research to see where your listeners are. The only way we can judge is by the letters we receive.

TSS: How is your programme structured?

PM: Each day of the week the programme [is produced by a different editor and therefore] has a different bias or flavour: Mondays we take the Insight Central Europe programme, which we contribute to; Tuesdays we deal with tourism and the environment; Wednesdays we bring business stories; Thursdays are about culture. Fridays I cover the regions of Slovakia, but actually anything goes on Fridays because as the non-Slovak I've got a different insight. So it's things that grab me, that I find a little different. On Saturday we have a best-of-the-week, and Sunday is Listeners' Tribune, where we answer letters. I absolutely love doing [Listeners' Tribune] because you get some fascinating questions and quite often I have to do research to answer them. And you get feedback from your listeners, which is very, very good.

TSS: What is special about your programme?

PM: One of the things I try to do particularly in my programme is to encourage people from other countries to come and visit Slovakia. A number of our listeners have written and said, "I will be in Bratislava, can I come and visit you?" or they just turn up here and ask if they can have a look around. And that's great because you know you're getting through to people when that happens.

TSS: How did you start working for RSI?

PM: I am married to a Slovak. I came here in the summer of 1995. In 1996 when I was home during the summer holidays, because I worked as a teacher, my wife [heard about the job], called me up and asked if I wanted to do some radio work. I had never done anything like it in my life before, so I arranged to shadow somebody for the following week and by the Wednesday I was in the studio on air. I was hooked and I've been hooked ever since.

TSS: How do you choose the stories for your programme?

PM: I try to choose topics that I think people will be interested in. Because I'm not Slovak I sometimes see things differently. I probably see them more as a tourist. I try to portray life in Slovakia, but from my outside perspective.

The example I always use is the town of Stupava [and its surroundings]. It is the centre of the cabbage-growing industry [in the country's west] and in the autumn, one of the things that hit me was that in every yard, which are usually not open, there were heaps of cabbages. And I thought, "This is a story," because you never see that in England. So I made it a story, and the listeners liked it, and I also wove into it recipes for kapustnica [cabbage soup].

For Easter I prepared a story about the village in eastern Slovakia where my wife comes from. There are only 42 houses in the village and the Easter traditions are Greek Catholic, which I find absolutely fascinating.

TSS: Your listeners are a very particular group of people because the programme is not accessible on regular frequencies.

PM: The broadcast goes out on short wave, so they are hobbyists. Their hobby is tuning into different short-wave radio stations. These people send in what is called the reception report. In other words, they have to prove that they've listened to the programme, and the radio station in return sends them a so-called QSL card [which they collect]. It's a postcard authenticating that they've listened to the broadcast. I met somebody in the US who's got over 35,000 QSL cards going back to the 1930s.

There are also other people who listen to us. They are first-, second-, and third-generation Slovaks but their first language isn't Slovak because they live, for example, in an English-speaking country. Their roots are Slovak, so they want to hear what is going on in their [ancestral] country.

TSS: Do you also play music on your programme, and if so, what kind?

PM: I try to promote Slovak folk music and it is something that certainly is getting feedback from listeners. They like the folk music. It is [traditional] music for this country; you can hear modern electronic music in any country. Musical instruments like the fujara [long wooden pipe with a deep sound] or the drumbľa [Jew's harp - a small lyre-shaped musical instrument made of metal, held between the teeth and struck with a finger] are just so evocative of Slovakia - you usually don't hear them in the music of other countries.

To tune in to Radio Slovakia International on short wave and via satellite, visit www.rsi.sk for frequencies and broadcast details.Listen on the internet at www.wrn.org (listeners' area).