THE SLOVAK cabinet has approved a model for reforming the country's retirement pension programme, but before the bill is discussed in parliament in June, it faces the opposition of labour unions, which have included proposed pension reform in a list of grievances that labour leaders say could lead to a general strike.
In early April, the cabinet approved the recommendations of the Labour, Social, and Family Affairs Ministry to introduce a so-called capitalisation pillar into the pension system, allowing citizens to deposit part of their social insurance payments into personal pension accounts with private asset-management companies.
According to Labour Minister Ľudovít Kaník, the change will allow Slovakia and Slovak companies to earn interest on funds deposited in the capitalisation pillar, while retirees are still paid pensions from the current 'pay-as-you-go' system. 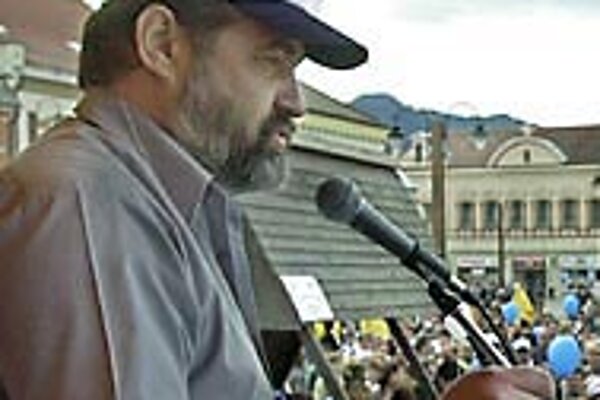 Font size:A-|A+
THE SLOVAK cabinet has approved a model for reforming the country's retirement pension programme, but before the bill is discussed in parliament in June, it faces the opposition of labour unions, which have included proposed pension reform in a list of grievances that labour leaders say could lead to a general strike.

In early April, the cabinet approved the recommendations of the Labour, Social, and Family Affairs Ministry to introduce a so-called capitalisation pillar into the pension system, allowing citizens to deposit part of their social insurance payments into personal pension accounts with private asset-management companies.

According to Labour Minister Ľudovít Kaník, the change will allow Slovakia and Slovak companies to earn interest on funds deposited in the capitalisation pillar, while retirees are still paid pensions from the current 'pay-as-you-go' system.

Under the cabinet plan, people entering the workforce for the first time will be required to enter the capitalisation system, while those already employed will have the choice of staying in the current system or switching to the capitalisation pillar.

"[Pensions for] the youngest [categories] can be applied at a higher level towards more risky operations with a vision of greater value. On the other hand, the oldest [category] will have to have an investment strategy that would discount the possibility of unsuccessful or devalued assets," said Kaník.

According to the plan, the 28 percent of an employees wage that goes towards social insurance - some of which the employer pays - will be split, with 10 percent of the wage going to the current fund, 10 percent going to a personal pension account, and the remaining 8 percent split between funds for disability and widow's pensions.

While acknowledging that placing retirement funds on the market entails some risk, Kaník is confident that the government will be able to install a regulatory structure through the Financial Markets Office (ÚFT) that will protect Slovakia's pension accounts. However, plans for regulation of the capitalisation pillar have not yet been laid out.

"The state guarantees the safety and reliability of this system through the creation of consistent, multilayer, and strict regulatory and control mechanisms," said Kaník.

"We are not going to get away from ourselves, because the ÚFT also has to be involved as the supervisory organ. We are going to be discussing this a lot more, and I would rather not go into details right now," he added.

Analysts have had mixed reactions to the proposal so far, acknowledging that the system must be reformed but wary of the impact that the change could have on Slovakia's budget.

"The first pillar gets resources from wages, in which growth in the next few years will be relatively high compared to other countries. It is possible to predict that wages as a share of GDP will increase - at the moment [wages] are around 40 percent [of GDP]; in developed countries they are around 70 percent," said Eugen Jurzyca, head of the INEKO think tank.

"The social value of the capitalisation pillar lies in distributed risk connected with the long-term future of securing pensions," he said.

Nonetheless, reshaping Slovakia's pensions will not be cheap. The government has already allocated Sk65 billion (€1.6 billion) for pension reform from last year's privatisation of the SPP gas utility, but Kaník says this amount will only cover reform expenditures through 2006. Another Sk50 billion (€1.2 billion) is needed to cover costs through 2015, and Sk100 billion (€2.4 billion) to keep the system through 2020.

But even with the injection of current privatisation revenues, there are worries that pension reform costs could eat deeper holes into Slovakia's budget deficit, which stood at Sk51.6 billion (€1.3 billion) last year.

"After [the capitalisation pillar is introduced], it will be necessary to finance missing resources through increased taxes or at the cost of an [increased] deficit in the state budget," said analyst Juraj Kotian from the Slovenská sporiteľňa bank.

The Labour Ministry, however, is confident that the system can be reformed without straining the public budget and in line with Slovakia's plans to join the European single currency in 2007 or 2008.

"We will try not to include the costs of pension insurance reform in the overall government deficit, since the financing of the deficit in the social security provider will have an impact on the government's ambitions to join the European Economic and Monetary Union," said Kaník.

If all goes according to plan, Slovakia's pension system will be open to private financial houses at the beginning of 2004. But without a concrete plan on how the system will work, private pension providers are hesitant to say how they will be involved in the reform.

"The conditions for entering the [capitalisation] pillar are not yet known. Because of this, insurance providers are not yet specifying their participation in pension reform," said Margita Hurčíková from the Association of Complementary Pension Insurance Providers.

Government representatives, however, have so far failed to find consensus on the pension reform plan, and talks in the tripartite council - representing labour, employers, and government - broke down in mid-April after barely touching on pensions.

While representatives of Slovakia's Confederation of Labour Unions (KOZ) say they are not opposed to reform as such, they fear that pension levels will drop if the plan is implemented as it is.

Instead, labour leaders are pushing for a 10 percent increase in pension payouts from July this year. The Labour Ministry has already proposed raising pensions by 5 percent, and the Sociálna poisťovňa social security agency has said it is prepared to raise pensions by 8 percent.

While not a central part of the KOZ complaints to government, the pension reform plan was included on a list of six grievances sent to members of parliament by labour leaders in late March.

On April 23, the KOZ announced that it was moving from "crisis" into "strike emergency" state, along with plans for a mass protest in Liptovský Mikuláš, central Slovakia, on the May 1 bank holiday. Liptovský Mikuláš is a traditional location for labour protests. In 1890 and in 1918 workers demonstrated here for 10-hour and 8-hour working days, respectively, and trade unions meet in the town every year for the Labour Day holiday.

Although the KOZ has promised it will wait until after Slovakia's May 16-17 referendum on EU entry before initiating any strike action, labour leaders say they are prepared to disrupt highways and border crossings, and shut down the country's primary and secondary schools in late May or June if their complaints are not met.

"We are preparing ourselves to bring our pressure to a head, which we have been doing with [other] very unpopular austerity [measures]," said KOZ head Ivan Saktor.

In late January, the KOZ led railway unions in a series of strikes over the government's cancellation of 25 loss-making regional rail lines. Railway workers struck for six hours on January 29, and started an open-ended walkout on January 31 that lasted three days before a court ordered striking workers back on the job.

It is likely that any industrial action by the unions will follow the same pattern as the rail strike - a limited walkout will be followed by talks with government representatives, and if no agreement is reached, an open-ended strike will follow.

"We want to apply [limited] warning actions in May or June. If there is no change in the government's view, certainly we will also use more radical measures," said Saktor.