Romany language to be taught in three high schools

AS PART of Slovakia's commitment to the European Union, the country has promised to guarantee that minority languages will be an integral part of elementary and high-school education.
A new project, coordinated by the State Education Department, aims to establish the Romany language and Romany history as part of the curriculum at three high schools in Slovakia.
One of these, opening in Košice in September 2003, will focus on computer technology and foreign languages. 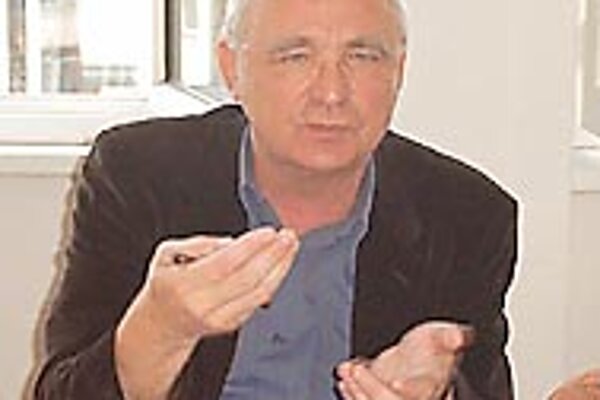 Font size:A-|A+
AS PART of Slovakia's commitment to the European Union, the country has promised to guarantee that minority languages will be an integral part of elementary and high-school education.

A new project, coordinated by the State Education Department, aims to establish the Romany language and Romany history as part of the curriculum at three high schools in Slovakia.

One of these, opening in Košice in September 2003, will focus on computer technology and foreign languages.

The other two schools are an already-existing Slovak-English bilingual high schools in Bratislava, focusing on state administration, and the Gandhi school in Zvolen, focusing on social services and terrain work and set to open in September 2004.

The lessons in Roma language and history will be compulsory for all students, who will be both Roma and non-Roma.

The initiator of the project and director of the government's department of ethnic education, Ján Cangár, says this is step forward that was a long time coming.

"The Roma haven't been given this right up until this point. There are no teachers and no books. We want the Romany language and history implemented in national education," he says.

"We have to try it because as yet we don't have the experience [to be sure of the results]. The whole experiment will last for nine years, maybe less. In the end, there will be a curriculum for elementary and high schools," he says.

Those involved in the project, including the founders of the schools, will take part in an international seminar in Strasbourg on May 26 and 27, where they will learn about different types of schools.

"In Europe they don't have much experience of the Romany language and history being taught," says Cangár. "The European Council realises that it's important to create opportunities for the Roma to be educated in their mother tongue."

In his view, teaching the Romany language in schools is the first rung of the ladder.

The Romany language spoken in Slovakia consists of three dialects: Slovak Romany, spoken in eastern Slovakia; Hungarian Romany spoken in the south and southwest of Slovakia; and the Olah or Wallachian dialect, which shares some mutual elements with Balkan Romany.

Approximately 80 percent of Roma in Slovakia speak the eastern Slovak Romany dialect and that is the one that will be taught in the high schools. So far, Romany language and literature has been taught only at the Secondary School of Arts in Košice and at the department of Romany studies at the University of Constantine the Philosopher in Nitra.

"There is a gap to be filled," says Anna Koptová, director of the Good Romany Fairy foundation and a prospective founder of the Košice-based high school.

"We want [Roma] kids to study and get a grade in the Romany language as part of their high-school diploma, and we want them to know their own history, traditions, and culture. If they don't go on to university, they will get a chance to complement their high-school diploma with another year of professional schooling in the area of health care, education, or social work so they can work as social workers etc. For this reason our project is for five-year high-school education," she said.

An important goal of the initiative is to increase the number of Roma high-school students. Organisers hope it will show Roma that they have a place in the Slovak education system, thus motivating more of them to take an active part.

"According to statistics, there are only three Roma students in high schools in eastern Slovakia," says Koptová.

"These are terrible numbers that force you to think and try to do something. The reason for these low numbers is the fact that Roma children don't achieve high enough results to compete for places in high school," she explains.

But most Roma children encounter problems at the beginning of their schooling, which often results in them dropping out of school at a young age.

"Our original idea wasn't to found a high school but an elementary school," says Koptová. "Unfortunately, it is not possible to establish that kind of school under current Slovak legislation. After consultation with the regional office, we decided to establish a high school to which we will, little by little, associate a pre-school institution and elementary school."

The school in Košice will officially be classed as a private school, but the students will pay no fees. How the school will be financed is not yet clear.

"When the founder doesn't take fees, he has a right to 100 percent cover for expenses from the state budget for education, according to the law," says Koptová. "That's Sk20,000 (€488) per student annually. If that is not enough we will have to find additional money."

The founders of the project want to create a system of grants and scholarships in order to pay the living expenses of talented but socially disadvantaged students from all over the country. They hope that a recently established NGO attached to the schools will provide funding for such initiatives.

Due to unemployment and the low educational level of many Roma families, parents are often unable to help children with their homework. A way of solving this problem can be seen in Pecs, Hungary, where the Ghandi school established there in 1991 is a boarding school during the week. Children only go home at weekends.

This Hungarian model where kids board from the fifth grade until they take their high-school diplomas is being adopted in Slovakia by Nataša Slobodníková, director of the KARI (County Association of Roma Initiatives) union and prospective founder of the Gandhi school in Zvolen.

"The Gandhi school in Pecs has excellent results," says Slobodníková. "Between 70 and 80 percent of its former students are studying at various universities and institutes of higher education. This is fertile ground for creating and fostering a Roma intelligentsia. The high school in Pecs has 85 percent Roma students and 15 percent talented but socially disadvantaged Hungarian pupils."

Organisers say they will look for teachers for the new schools at the department of Romany studies in Nitra and in teacher-training institutes. Teachers' assistants will find gifted Roma kids to apply to the high schools.

"We don't believe Romany kids [will automatically] have lower average grades," says Slobodníková. "We believe a lot depends on the teacher's attitude, the students' interest in studying, and the creation of opportunities, which means boarding school. The Gandhi school [in Zvolen] will create the conditions for them to be successful."