JUST over 52 percent of eligible voters took part in the weekend referendum on Slovakia's entry to the European Union, out of which 92.46 percent were in favour and around 6 percent against, according to the Central Referendum Committee (ÚKR).
"To get over 50 percent is in no way easy," said Prime Minister Mikuláš Dzurinda on May 17, when it was already clear that the fifth referendum in the history of an independent Slovakia would be the first one not to fail due to low turnout. Slovak law requires that a referendum must have more than 50 percent attendance to be valid. 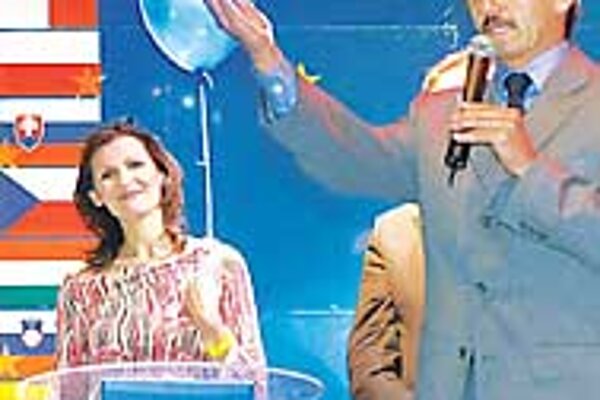 Font size:A-|A+
JUST over 52 percent of eligible voters took part in the weekend referendum on Slovakia's entry to the European Union, out of which 92.46 percent were in favour and around 6 percent against, according to the Central Referendum Committee (ÚKR).

"To get over 50 percent is in no way easy," said Prime Minister Mikuláš Dzurinda on May 17, when it was already clear that the fifth referendum in the history of an independent Slovakia would be the first one not to fail due to low turnout. Slovak law requires that a referendum must have more than 50 percent attendance to be valid.

"Thank God for this result," Dzurinda said. "One era in Slovak history, which began with the fall of the iron curtain, has come to an end. Now there is time for a brief celebration. Then there is a lot of hard work ahead," he said.

"We think it's a good thing that Slovaks have decided to enter the EU. Of course, it would have been even better if participation in the referendum had been larger, but I think the percentage of those who voted yes is a record so far in the EU," said Onno Simons, counsellor with the EC delegation in Slovakia.

After the first day of voting, it was far from certain that the plebiscite would be successful. The only preliminary results were coming from the headquarters of various political parties, which were doing their own estimates.

Media reports indicated that at 10:00 on May 17, just four hours before the voting was set to end, the attendance reached only 41.6 percent. Around noon the country's top three political figures - President Rudolf Schuster, PM Dzurinda, and Speaker of Parliament Pavol Hrušovský - made a last ditch effort to mobilise the citizens.

"We want to ask you to use the remaining minutes to come and express your choice for the future direction of our common homeland in this referendum. We believe that, as at all times throughout our history, even now you will make the right decision," the three leaders declared two hours before the deadline.

"Not for one moment did I have any doubts that the voters would be highly responsible when making this decision about the future fate of Slovakia," said Schuster after the results were known.

The New Europe 2000 NGO submitted a complaint to the ÚKR on May 17 that Slovak electronic and print media violated the referendum information moratorium. The law regulating referenda sets a ban on campaigning during the 48 hours proceeding the referendum and the voting itself.

However, the authorities may be reluctant to deal with the complaint.

"This is a top priority of the state and political parties or media are not going to be sanctioned in any way," declared Vladimír Mečiar, head of the opposition Movement for a Democratic Slovakia (HZDS) at a meeting of the political elite on May 13, the day before the official end of campaigning, claiming this to be the agreement of all political leaders.

Despite efforts to attract the highest possible number of voters, politicians announced in advance that even an invalid referendum would not prevent the country from joining the union, as it only has a recommendatory nature, thus leaving the final decision up to parliament.

"An unsuccessful referendum will not prevent Slovakia from entering the EU," said Dzurinda on May 12.

Among the first to congratulate the Slovak government were Czech Foreign Minister Cyril Svoboda and Alexander Kwasniewski, the president of Poland. Both countries are planning to hold referenda on the issue within weeks and Dzurinda offered to share Slovakia's experience with the referendum.

To ensure the validity of the referendum on EU entry several countries, including neighbouring Hungary and the Czech Republic, have adapted legislation decreasing the 50 percent attendance normally required in order for the plebiscite to count. The move turned out to be vital in Hungary, where attendance reached just over 45 percent.

Mečiar proposed a similar measure just a month before the Slovak plebiscite. The ruling coalition refused the idea.

"You cannot change the rules once the game has started," said PM Dzurinda on April 15.

Opinion polls steadily showed that a large majority of the voters intended to cast their ballots, giving little grounds for any last-minute changes of the rules. The Public Opinion Research Institute (ÚVVM) of the Statistics Office released its most recent findings on the issue on April 30. Around 66 percent of respondents indicated they would take part, with numbers for previous periods being even higher.

"[The results] are no great reason for celebration. We should thank the voters that despite everything that has happened in the campaign they came and voted," Monika Beňová, vice chair of opposition party Smer, told the SITA news agency.

Among the scandals preceding the referendum was a report brought by major Slovak dailies that the government had been lying in its campaign.

"Just imagine, it is 2004 and you decide to go see your friends in the nearby Brno [in the Czech Republic]. You've packed already, but suddenly you remember that you don't have a visa. And shopping in Vienna? Forget it. Not a step without a visa. A single bad decision can make Slovakia an island," said a radio spot approved by the government, although there is no evidence to suggest that if Slovakia did not join, Slovaks would be required to apply for visas to enter EU member countries.

Beňová suggested that Deputy PM for European Integration Pál Csáky, responsible for the referendum campaign, should be removed from his post.

When asked whether Csáky should be ousted over the running of the campaign, Dzurinda said that now was the time for celebration and that such questions would be answered later.

Csáky himself said he sees little reason to resign. "I think I have added my small bit to the success of the referendum," he told SITA.

Results of other EU referenda