Lašák: "We are writing hockey history"

WHILE Slovakia's arsenal of hockey attackers have made the national side one of the world's most exciting to watch and dangerous to play against, the team's dynamic young goalkeeper Ján Lašák, 24, has brought the squad the top quality net minding needed to flourish at the top level of international hockey.
The first Slovak goalkeeper promoted from an NHL farm team to a top-league position, Lašák has been praised for his quickness and leadership, and teammates say his influence was key to the team's 4-2 victory over archrivals the Czech Republic for the bronze medal at the 2003 world championships in Finland.
For Lašák, it was his fourth national team medal, after a gold in 2002, a silver in 2000, and a bronze from the 1999 world under-20s championships. 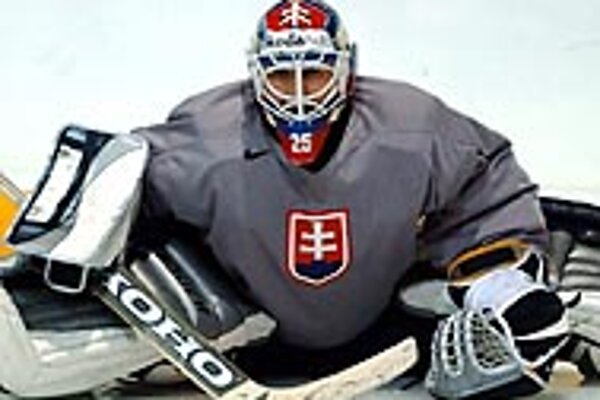 Font size:A-|A+
WHILE Slovakia's arsenal of hockey attackers have made the national side one of the world's most exciting to watch and dangerous to play against, the team's dynamic young goalkeeper Ján Lašák, 24, has brought the squad the top quality net minding needed to flourish at the top level of international hockey.

The first Slovak goalkeeper promoted from an NHL farm team to a top-league position, Lašák has been praised for his quickness and leadership, and teammates say his influence was key to the team's 4-2 victory over archrivals the Czech Republic for the bronze medal at the 2003 world championships in Finland.

Currently married with a child, Lašák, lives most of the year in Nashville, Tennessee, where he plays with the NHL's Predators organisation. The Slovak Spectator talked to him after his arrival with his teammates from the tournament to Slovakia on April 11.

The Slovak Spectator: What does winning the bronze medal this year mean for you and for the Slovak hockey team?

Ján Lašák: Winning it was a great achievement. I'm very happy that we were able to make other people happy and unite them [while they were watching us play].

TSS: This is the first time Slovakia has ever been able to beat the Czech Republic in a key match - any special feelings about that?

JL: I'm very happy that I was there when this historical victory happened. Right now we are writing the history of Slovak hockey. The feeling is really great. There was a lot of motivation behind how we played.

TSS: How did it feel to play against your teammate from Nashville, the Czech goalkeeper Tomáš Vokoun?

JL: It was interesting. We've played together for four years so I thought it might be a little weird [when we start playing against each other], but as soon as we took the ice, all emotions were gone.

Tomáš is a great person and a solid player, so it was a great plus for me to win a game against him. But it had no effect on our friendship.

TSS: In six decisive matches at the tournament, your goals against average was 1.84, fifth on the table, and your saves percentage was 93.45, fourth on the board. How satisfied are you with your play?

JL: Those are very nice numbers, and I'm very satisfied with the save success of 93 percent. It's my best accomplishment so far.

TSS: Were there any big differences between last year's championship in Sweden and this year's in Finland?

JL: I think it was a big surprise for people when we won last year, and so maybe they expected us also to win this year. The way we prepared for the match was no different from the last year - everything was the same. The feeling was the same too - I was calm.

TSS: What was the atmosphere like at the games in Finland?

JL: The atmosphere was amazing. I was really surprised that so many people showed up to support us. That really encouraged me.

TSS: Ján Filc, who coached the team to gold last year, was replaced this year by František Hossa, who will also coach the team next year. Are you satisfied with Hossa? Are there any differences in their coaching styles?

JL: Each coach has own style of training, so the difference is largely in that. Ján Filc used to be a goalie, so from that point of view it was a benefit for me, while I think Hossa is a former defender.

TSS: If you were playing against the Slovak team, who would you fear the most?

JL: There are lots of players I would be afraid of. I would have an advantage because I know them, but it would still be tough to play against [forward Peter] Bondra or [forward Miroslav] Šatan, let's say - but mainly Šatan because the puck always finds him.

TSS: I notice that you always talk to the referees with a smile on your face. What are you saying to them?

JL: I am a communicative type of person, and sometimes I joke around with them or just talk, other times I 'm just bantering, saying that we're the home team or something like that. They already know me and never penalise me for that.

TSS: When are you returning back to the States, and is there anywhere else you would like to play besides Nashville?

JL: I am leaving Slovakia in September this year. I play for Nashville now, but if I had the choice, it would be Toronto for sure, because it's a beautiful city that just lives hockey.

TSS: I've seen that you always pray before every match. Why, and how many times?

JL: I have been praying before matches since my 18th birthday. It helps me [concentrate on the game]. I always reserve the five minutes before a match to pray the Our Father, the Hail Mary, and the Nicene Creed - each of them four times.

TSS: What do you think about the hockey victory being used as a way of promoting the referendum on EU entry?

JL: It's a good idea, so why not? In my opinion people should participate in the referendum. It doesn't really matter whether they vote for or against, but if they turn out, it will show that the people are interested in doing something for the country.

TSS: What does the rest of the hockey team think about that?

JL: I don't think that the boys care much about it.

1999-2000- Lašák drafted in 6th round (65th overall) by Nashville Predators, sent to play for Predators farm team Milwaukee Admirals in East Coast Hockey League (ECHL).
Played for the bronze medal-winning Slovak team at the 1999 world junior championships.
Member of the silver-medal winning Slovak team at the 2000 world championships; finished the tournament with a 2.41 goals-against average

2001-2002- Lašák made his NHL debut at St. Louis on April 9, 2002 and stopped a penalty shot attempt by Keith Tkachuk. Ranked tenth in the AHL with a 2.39 goals-against average.
Played on Slovakia's team at the 2002 Winter Olympics; vital member of Slovakia's winning team at 2002 world championships.

2002-2003 - Lašák led Milwaukee in appearances, wins, goals-against average, and save percentage; appeared in three games with the Predators while serving as the club's back-up goaltender.
Played for Slovakia's bronze-medal team at 2003 world championships.