Mečiar reaches out to old enemies

RELATIONS seem to be warming between long-time political foes in Slovakia, driven by a need to get the public voting in the recent referendum on EU entry and an apparent desire by former prime minister Vladimír Mečiar to save the remains of his political career, experts say.
On May 9 Mečiar, the leader of the opposition Movement for a Democratic Slovakia (HZDS), attended what he called his "first ever" one-to-one meeting with Prime Minister Mikuláš Dzurinda.
Mečiar said he initiated the meeting to discuss the referendum campaign and amendments to the constitution, among them Mečiar's proposal to create an additional second parliamentary chamber. 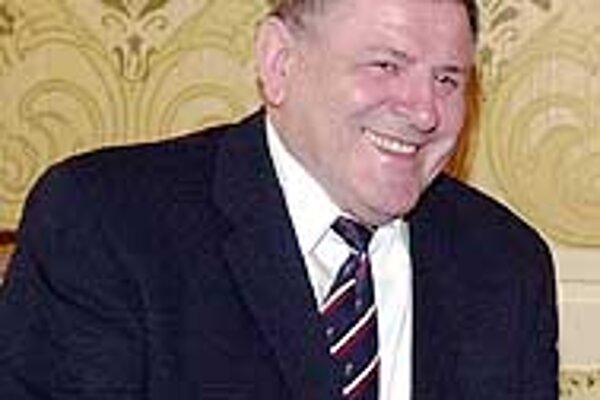 Font size:A-|A+
RELATIONS seem to be warming between long-time political foes in Slovakia, driven by a need to get the public voting in the recent referendum on EU entry and an apparent desire by former prime minister Vladimír Mečiar to save the remains of his political career, experts say.

On May 9 Mečiar, the leader of the opposition Movement for a Democratic Slovakia (HZDS), attended what he called his "first ever" one-to-one meeting with Prime Minister Mikuláš Dzurinda.

Mečiar said he initiated the meeting to discuss the referendum campaign and amendments to the constitution, among them Mečiar's proposal to create an additional second parliamentary chamber.

The changed relationship between the prime minister and his predecessor has baffled other prominent politicians.

"I find it embarrassing because I know how these people behaved to each other - the things they said - and today they act like the best of friends," said Robert Fico, leader of the opposition party Smer, on TV Markíza.

In March 2002 Mečiar said that Dzurinda did not "deserve the honour" of being in his presence. Now he acknowledges that things have changed.

"The very fact that we have met and sat at one table says a lot," said Mečiar after the meeting.

Mečiar declared that his party would not call for the government to be removed if the referendum on EU entry, held on May 16 and 17, were to fail, directly contradicting his own comments made a few weeks earlier, when he said that "the entire government should step down" if the plebiscite failed. In the event, the referendum delivered an overwhelming yes to membership.

The prime minister declined to comment on his current relationship with the HZDS boss, whom he described in January 2002 as someone who had been involved "in activities that sharply contradict the principles of democracy and a legal state".

Slovakia was not included in the first round of NATO expansion in 1997 with the neighbouring Czech Republic, Poland, and Hungary, because of Western objections to Mečiar's authoritarian leadership methods. Similarly, EU accession was stalled by his governments' failure to meet the required "political criteria".

Dzurinda's election campaigns in the autumn of 1998 and 2002, both of which secured him the seat of the prime minister, were founded on their opposition to Mečiar, focusing on the negative consequences for Slovakia's integration ambitions if Mečiar returned to power.

NATO and EU representatives sent out clear signals to Slovak voters before the 2002 general elections that integration would only take place if the electorate kept Mečiar out of government.

Dzurinda said the recent meeting with his erstwhile rival was intended to ensure enough people come to vote on Slovakia's EU entry.

"The HZDS voters are a significant group of people and Mečiar can effectively encourage those voters to attend," said Grigorij Mesežnikov, head of the Institute for Public Affairs think tank.

The referendum campaign prepared by the government was heavily criticised as insufficient by experts and the media.

On May 13 Slovak political elites took to the streets of Bratislava to rally support for EU entry and passers-by were able to observe a further surprising scene. The politicians stopped for refreshments at one of the Old Town's cafés, where former president Michal Kováč and Mečiar shook hands and sat next to each other.

Kováč's son was kidnapped and taken to Austria in August 1995. The kidnapping was allegedly organised and performed by the secret service headed by Ivan Lexa, appointed into office by then-prime minister Mečiar, who was at the time known for his disputes with Kováč.

The degree of Mečiar's involvement in the case is not known. However, in March and July 1998 he placed amnesties on anyone involved in the abduction, thus preventing any further investigation. The amnesties were to ensure "civic harmony", as Mečiar put it then.

After the recent friendly meeting, Kováč said: "I expected [Mečiar] to say: 'Michal, I'm sorry that I hurt you', but he does not seem up to something like that just yet."

"I have no disputes with him, I've never had any. I don't know why I should make up with someone with whom I am not at odds," Mečiar said, in response.

Analysts suggest that Mečiar's efforts to fit in may not be all about EU accession.

"This new style may be important for his position within the HZDS. It could strengthen the conviction of HZDS members that Mečiar should remain a leader who can bring the party to power. I think at the upcoming party congress Mečiar will try to prove that he is becoming an acceptable partner [for other parties]," said Mesežnikov.

In the general elections in 1998 and 2002, the HZDS received the most votes out of all parties, but failed to form a government because none of the other parties wanted to work in a coalition with Mečiar.

This year's party congress is scheduled for June, and Mečiar is the only candidate for chairperson at this time.

In the 1998 elections, the HZDS received 27 percent of the votes, in 2002 it received 19.5 percent, indicating that the party has lost some popular support. It has also lost members. Two large groups of members have broken away from the HZDS in the last year, both citing Mečiar's "undemocratic methods" as their reasons for leaving.

The first group, led by former parliamentary speaker Ivan Gašparovič, left just before last September's elections and formed the Movement for Democracy party. The second, headed by former party vice-chair Vojtech Tkáč, left the HZDS a few months after that, transforming into the People's Union party.

However, Mečiar still remains one of the most popular figures on the Slovak political scene. According to a survey carried out by the Public Opinion Research Institute (ÚVVM) of the Statistics Office released on April 22, Mečiar is the second-most-trusted Slovak politician. with 16.9 percent, following Smer leader Fico with 26.3 percent.

Mečiar is thought to have good chances in the presidential elections scheduled to take place in 2004. An opinion poll by the Dicio agency released on May 9 shows that 10.5 percent of voters would have supported Mečiar's bid for presidency had the vote taken place between April 11 and 24.

That result makes the HZDS leader the second-most-supported candidate. Foreign Minister Eduard Kukan, a member of Dzurinda's Slovak Christian and Democratic Union, is first with over 14 percent.

But despite the recent signs of warming relations, analysts say Mečiar is unlikely to find political allies in the future.

"I think the ruling parties remain determined not to cooperate with Mečiar. They know who he is and that miraculous changes don't happen," said Mesežnikov.