Classy food in a stylish location 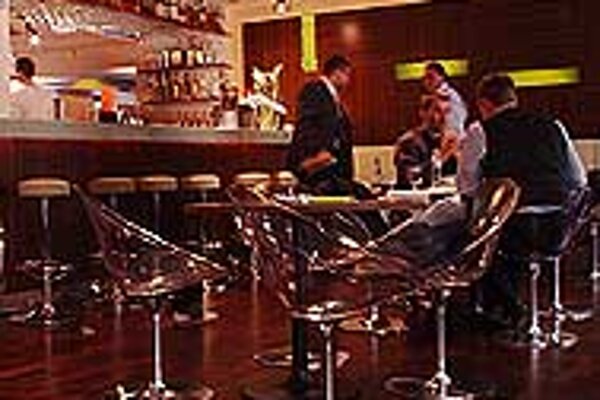 THE ADVANTAGES of expensive dining are usually the setting, friendly waiters, and quick service, as well as the availability of a table when all the medium-priced places are crowded. The hip and trendy Medusa, a new restaurant next to Michael's Gate in Bratislava's Old Town, has them all.

Like other Bratislava restaurants such as People's, Le Monde, and Mezzo Mezzo, Medusa's interior design is modern and simple. The cocktail lounge has large windows overlooking the cobbled street, fashion photographs on the walls, and plastic designer chairs. The restaurant, which is discreetly placed around the corner from the bar, lures potential customers with a very inviting atmosphere conjured up with fresh flowers and fruits arranged in vases and comfy upholstered chairs.

The menu is large, both in size (stylish but somewhat unpractical to read) and in content. The choice of starters, soups, and salads makes you forget about any diet vows and fully focus on delights such as asparagus with hollandaise sauce, snails, duck liver, Greek salad with goat cheese, polenta, and quail broth.

Most of the dishes are straight out of the nouvelle cuisine genre, with light sauces and fresh vegetables. One example of this is the arugula salad with a daring but smashing combination of sun-dried tomatoes, Parmesan, and capers. The lamb dish I had was not spectacular because the side portion of ratatouille stuffed into a halved tomato was meagre, and the meat itself should have been of higher quality, without any gristle. The salmon fillet in a spinach "nest", though, was great, and tasted like it had been freshly delivered from somewhere in Scandinavia.

Among the deserts was a most original use of mascarpone, the typical cream cheese for tiramisu, which the chef caramelised with sugar into a crust on top of fresh strawberries. It was divine, particularly when consumed with one of their perfectly pulled Italian espressos.

The list of deserts is missing explanations as to what exactly some of the creations are made out of. The waiters can explain, but should probably not volunteer their own opinions that a certain cake is "not good".