One person, one vote?

WEEKS after a nationwide vote sealed Slovakia's entry into the EU, questions are being raised about the accuracy of the turnout figures, throwing the validity of the referendum into doubt.
The official results presented by the Statistics Office show 52.15 percent of eligible citizens voted in the plebiscite, which took place on May 16 and 17. According to the Slovak constitution, at least 50 percent of voters must attend a referendum in order for it to be binding.
But an investigation carried out by The Slovak Spectator has revealed that a number of voters took two ballots instead of one into the voting booth, while election officials turned a blind eye. 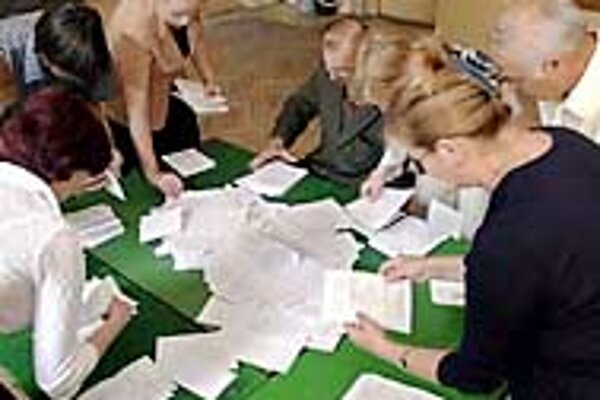 Font size:A-|A+
WEEKS after a nationwide vote sealed Slovakia's entry into the EU, questions are being raised about the accuracy of the turnout figures, throwing the validity of the referendum into doubt.

The official results presented by the Statistics Office show 52.15 percent of eligible citizens voted in the plebiscite, which took place on May 16 and 17. According to the Slovak constitution, at least 50 percent of voters must attend a referendum in order for it to be binding.

But an investigation carried out by The Slovak Spectator has revealed that a number of voters took two ballots instead of one into the voting booth, while election officials turned a blind eye.

In Slovak elections and referenda, citizens cast their ballots in voting rooms, where the voting procedure is organised and supervised by area commissions. The area commissions also count the votes and prepare reports that list the voting results. Those are then passed on to district and national commissions, which process the results in the reports.

"When I went to vote, a lady from the commission just pointed to a stack of ballots. I accidentally took two and I only realised when I was in the voting booth. I used one and returned the other to the stack. No one said anything to me," said Martin, 21, who voted in Bratislava.

Others recounted similar experiences. Magda, 23, a voter from eastern Spišská Nová Ves also found herself behind the curtain with two valid ballots.

The same thing happened in the western city of Piešťany.

"I entered the voting room and noticed that there was only one lady sitting in the room. She was checking the names of the people coming in," said Jana, 24, who cast her ballot on Piešťany's Dopravná Street.

"After taking my name, she asked me to take a ballot from the stack that was next to her, but didn't pay any attention when I did so. I accidentally took two. I used only one and threw the other one away," Jana said.

However, a referendum commission member from the only polling station on Dopravná Street contradicted this report, insisting that a different system had been in place.

"There was one member of the commission who directly handed out ballots to the voters," said Miroslav Kropaj, head of that commission.

"I think it was the same in all places, that in every case a commission member handed the ballot to the voter. That's what the law says," he added and also stressed that "in no case did people get two ballots."

National-level authorities pointed out that the procedure of handing out ballots is strictly regulated and all commissions are aware of that fact.

"The law on referenda specifies what is to be done during a referendum. The members of the commission are supposed to hand out the ballots. I don't know why people should have taken the ballots themselves," said Lívia Škultétyová, director of the elections and referenda section of the Interior Ministry, adding that she had no information about such practices occurring during the recent plebiscite or in previous elections.

"There are very few ways in which the results of elections or a referendum can be manipulated," said Peter Mach, head of the Statistics Office.

"[The results] are guaranteed by the area commissions, and those are the only places where results could be influenced," Mach said.

"If people had more than one ballot, it would have to pop up in the committees' reports that more ballots were cast than voters attended. As far as I know, this didn't happen in any case," Škultétyová added.

But in some instances, people came to vote and found their names had already been marked as if they had voted.

"I came to vote and the number by my name was circled. Perhaps it was because I have the same name and address as my father, who voted before me, but his name was also circled. In the end they allowed me to vote," said Igor, 22, a Bratislava resident.

Jana, who has never met Igor, said that a friend of hers who voted at a different place had a similar experience. The friend found the name of her husband, who did not attend the referendum, marked as if he had voted.

Some observers point out that it is not too difficult for commission members to add further ballots after the voting rooms close.

"If you have a list of names of people living on a street and no one from that street comes to vote, there is nothing to prevent [the committee members] from [faking it]. I'm not saying that this was the case in this referendum, but it is a possibility," Ivan Gašparovič, head of the non-parliamentary Movement for Democracy (HZD) and self-proclaimed candidate for the 2004 presidential elections, told The Slovak Spectator.

No official measurements of voter turnout were used during the voting, and there is thus no independent information available about the number of people who voted on either of the two days. Other than the number of ballots counted, the only information on turnout came from political parties, some of whose members made up the referendum commissions.

All the parties whose members were in the referendum commissions had expressed support for EU entry, and were keen to see the vote draw the required turnout.

Neither NGOs nor foreign observers were present at the voting, which was unmonitored by any independent organisation.

"I think there was no need for us to monitor," said Marián Gabriel, head of the NGO Občianske OKO, which focuses on election and referendum monitoring.

"All our experiences from previous elections showed that the election process here is safe, especially in the larger events. Local elections are more of a problem," he continued, adding, "No one asked us to monitor. It would therefore be difficult to get finances for monitoring."

He said reports of multiple ballots being taken by voters were most likely "a coincidence."

"Things like that don't happen in Slovakia," he added, pointing to his organisation's previous experience with elections and referenda.

Nevertheless, on May 27 police said that the results of December's local elections had been manipulated in one Bratislava district. Some candidates were allegedly given almost 150 votes more by the commission than they had received from citizens. One of the candidates asked for the results to be checked.

No criminal charges have yet been filed, and the matter is currently before the Constitutional Court, which can decide to annul the results of the election in that district.

Gašparovič suggested that a recount of the EU referendum ballots might have surprising results.

"It would be very interesting to see what sort of a result we would get if the votes were checked again," he said.

"The problem is that only around 24 percent of the votes were cast on [the first day of the referendum]. On [the second day], according to my information, hardly anyone attended the voting after 10:00, and suddenly we had 28 percent attendance. It is rather strange [that the referendum was nevertheless successful]," the former parliamentary speaker said.

"At the same time, Prime Minister [Mikuláš] Dzurinda said the referendum was successful even before the results were officially announced," he said, adding that for his part, he was "very much in favour of EU entry" and was pleased with the result of the vote.

However, experts say it would not be practical to investigate the accuracy of the turnout figures for the recent referendum at this point.

"It would be very difficult to check it now," said Gašparovič.

"[Any tampering] would be impossible to detect," he said.