A LACK of guidelines about new fees for various health-care services has left both patients and hospital staff reeling in confusion.
Under a new health law that came into effect on June 1, patients now have to pay a nominal fee for health-care services, ambulance rides, and prescriptions, although there are a number of exemptions based on age, condition, and financial situation.
These exemptions are causing many of the problems, health professionals say, along with too much red tape and not enough information. 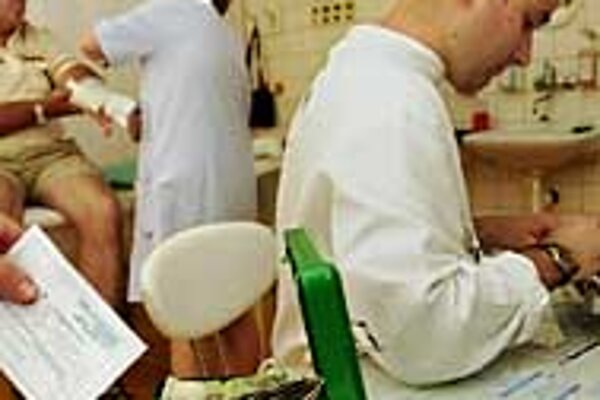 Font size:A-|A+
A LACK of guidelines about new fees for various health-care services has left both patients and hospital staff reeling in confusion.

Under a new health law that came into effect on June 1, patients now have to pay a nominal fee for health-care services, ambulance rides, and prescriptions, although there are a number of exemptions based on age, condition, and financial situation.

These exemptions are causing many of the problems, health professionals say, along with too much red tape and not enough information.

"We don't know which form is necessary, or whether we should check them over. If no one knows how to prove they are [exempt] from a fee, they have to pay it. If they are later shown to be exempt, the money is returned," the assistant director of Žiar Hospital, Cyril Mihálik, told the daily Pravda.

In many cases, patients have been forced to pay the fees only to have to return for refunds later. Other patients have not been aware that tokens and coupons bought in one hospital are not valid in others, causing further problems.

While some hospitals are refusing to treat patients until the relevant fee has been paid, others are giving patients up to 10 days to pay. If the patient then fails to do so, the hospital would have to take him or her to court to recover the money, often as little as Sk20 (€0.49).

Most of each fee is paid to health insurance companies, but the health-care provider keeps part of the sum.

A wide variety of collection methods for the money are in use across the country, ranging from nurses taking the cash directly from the patients to the installation of expensive machines that manage the entire process.

In central Slovakia, Banská Bystrica's Roosevelt Hospital has spent almost Sk100,000 (€2,425) on a token system, with the money going to the purchase of books of receipts, administrative guides for doctors, and calculators for ambulance crews, among other things.

Nurses from the hospital have complained about the length of time needed to process the payments, saying it left them less time to look after patients.

Other health professionals have complained that people using the health-care system do not carry enough small change for the fees.

An ambulance driver from Žilina told Pravda: "One old lady gave me a Sk200 (€4.85) note, which I ran to change in the buffet. It was the third time I'd done it, and the serving woman in the buffet was not amused. So I started to use my own money to change the notes, and now it's total chaos."

In the western Slovak town of Nitra, the teaching hospital decided to use adapted parking meters, located on the hospital grounds, to collect the required payments.

However, on the first day, one of the three meters was marked out of order and another was not accepting coins. This was despite the hospital paying Sk55,000 (€1,340) per month to rent the machines, according to the daily SME, and a contract stating that the machines would be fixed within an hour if they broke down.

The hospital has also established a central cash office, but as yet, it is only furnished with old furniture.

"For the moment, we haven't invested much, because it still isn't clear what the constitutional court will say about the new law," explained hospital director Viktor Žák.

The confusion comes from a clause in the constitution guaranteeing free health care to all citizens. Health Minister Rudolf Zajac, who pushed through the reforms, said he had consulted legal experts and was convinced that the introduction of fees was not in conflict with the constitution.

The ministry introduced the charges as part of measures to reduce the sector's debt, which is growing by Sk600 million (€1.4 million) every month, according to government figures.

It is also hoped that the fees will discourage abuse of the system. Slovaks use health-care facilities an average of 16 times per year, in comparison with the European average of six times.

Many hospitals outside Bratislava reported fewer patients once the new fees had been introduced. In Nitra, the emergency department for adults treated 120 patients the day before the payments started, and only 40 by the afternoon of June 1.

Ambulance services, particularly, have seen a sharp drop in use in the first few days of the new payments.

Marcel Tomko, an ambulance crewmember from Košice, told the daily SME that he had no passengers at all on the first morning of the new system.

"People have apparently thought about whether to pay per kilometre, or to come by tram. Normally at the weekend we carry about 30 patients [a day]. Today we have had only seven," Tomko said.

Payment for ambulance services is particularly complicated. In cases where more than one patient is collected on a given trip, the charge of Sk2 per kilometre is split between them, according to the distance each patient has been carried and allowing for any passengers in exemption categories.

Another problem is that some of the ambulances still do not have taximeters fitted for calculating the Sk2-per-kilometre charge.

In those cases, the ambulance crews have to carry loose change and books of receipts.

To avoid as many problems as possible, ambulance crews have received special training for calculating the costs.

The director of rescue and transport emergency services in Bratislava, Ján Kovalčík, told the daily SME: "We have heard that the drivers understand the system and know how to work it. So far, it has only been in theory, though, and we'll see how it works in practice."

Some ambulance drivers have found it difficult to ask their patients for the fees. One driver from the central Slovak town of Žilina decided it was easier to pay for the journey himself than to ask one old man for the nominal amount.

"I couldn't see how I could ask him for money when he was so poor," the driver said. "When I saw him, I was filled with dread. I would rather pay for the journey myself."

* Sk20 per visit to general practitioners and specialists. If a patient visits the same doctor twice on one day, he only pays one fee.

* Sk20 per drug prescription. One prescription may contain a maximum of three medicines. Of the fee, Sk15 goes to insurance firms and pharmacies keep Sk5.

* Sk50 for each day spent in hospital. The maximum number of days patients have to pay for is 21. Hospitals keep the fee.

For the majority of the fees, exemptions apply to certain groups of patients, such as poor people, children under six years of age, regular blood donors, mentally disadvantaged patients, and people with serious disabilities.