THE PARTY headed by former prime minister Vladimír Mečiar has just changed its name and elected some new people into top positions, but there seems to be little to indicate that Mečiar is loosening his grip over his own ranks and turning the HZDS into an acceptable political partner.
At its annual congress on June 14 in Púchov, the Movement for a Democratic Slovakia - The People's Party (HZDS - ĽS), which was the party's previous official name, renamed itself The People's Party - The Movement for a Democratic Slovakia (ĽS - HZDS).
The party also re-elected Mečiar as chairman, a position he has held since the HZDS was founded in June 1991. 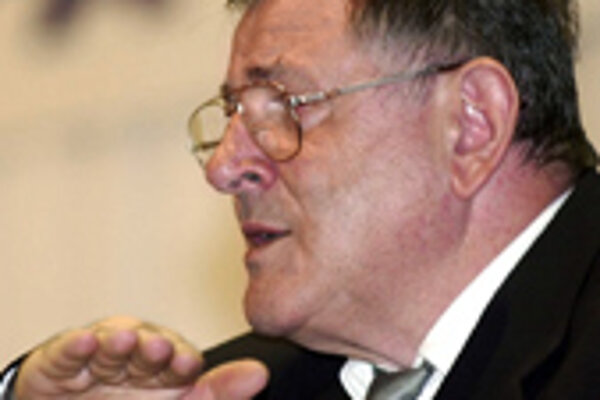 Font size:A-|A+
THE PARTY headed by former prime minister Vladimír Mečiar has just changed its name and elected some new people into top positions, but there seems to be little to indicate that Mečiar is loosening his grip over his own ranks and turning the HZDS into an acceptable political partner.

The party also re-elected Mečiar as chairman, a position he has held since the HZDS was founded in June 1991.

HZDS-led coalitions were in power from the time Slovakia gained independence in 1993 until parliamentary elections in September 1998. Mečiar's authoritarian methods are widely blamed for the country's failure to enter NATO along with the neighbouring Czech Republic, Poland, and Hungary in 1999. Slovakia also started lagging behind significantly in the process of EU accession.

Scandals involving the abuse of the secret service and shady privatisation of national property, along with the objections of the West made Mečiar an unacceptable political partner. Despite gaining the most votes in the 1998 and 2002 parliamentary elections, the Mečiar-headed HZDS was unable to form a ruling coalition after either vote.

Following last year's election, the HZDS, for the first time in its 12-year history, lost the position of the most popular party in opinion polls, and some HZDS members started calling for Mečiar to be removed from the party's top seat. However, the party's recent congress ended all speculation about Mečiar's position within his own party.

Mečiar was unanimously re-elected in an open vote as head of the party, and although the HZDS has new people in a number of new positions, all the changes made were exactly as Mečiar had planned before the meeting started.

Tibor Mikuš was elected head of the party's shadow cabinet. Under Mečiar's 1994-1998 government, Mikuš was the head of the state-owned electricity utility Slovenské elektrárne and is currently serving his second consecutive term as a HZDS MP.

Current deputy speaker of parliament Viliam Veteška is going to lead the party's campaign for the next Slovak parliamentary elections, which are scheduled to take place in autumn of 2006.

Former finance minister and Mečiar's long-time political ally Sergej Kozlík was chosen as the HZDS's frontman for the elections for the European Parliament (EP) to be held in 2004. The complete ballot for those elections is to be approved in February next year at a party summit. The HZDS also elected its vice chairmen.

The decision to change the party's name came about because Mečiar felt a need to distance the mother party from two groups of rebels that broke away from the HZDS in the last year.

"Two renegade groups stole our name. One took HZD - the Movement for Democracy - and the other calls itself the People's Union (ĽÚ)," said Mečiar before the congress, when talking about the need for a new name.

Other party representatives had also announced in advance that the old name must go, and that a new one should reflect the Christian, social, and national pillars of the party's policy. However, the final result was not too radical, being essentially just a reversal of the two parts of the name.

Early parliamentary elections were among other issues touched on at the congress.

Robert Fico, head of the opposition party Smer, has called for such elections to take place next year, at the same time as the elections for the EP, charging that "this government is not extremely right-wing, but extremely impotent."

Mečiar dismissed this idea as unrealistic.

"Fico's proposal is naive. There is no politician who can just get up and say, 'Behold, may it be as I say'. There has to be a situation that indicates that early elections will solve something, and 90 MPs have to recognise that fact, which is completely unrealistic today," Mečiar said.

Mečiar, who, experts say, has been eager to make friends with old foes in recent weeks to end his political isolation, did not rule out that the party will under certain circumstances support a minority cabinet.

"We are not interested in political instability at this time," he said.

Early elections would most likely not improve the position of Mečiar's party. If they were to take place today, Fico's Smer would be the clear winner. According to a survey carried out by the Public Opinion Institute of the Statistical Office released on June 18, as many as 25 percent of Slovaks support Smer.

The same research shows that only 17.7 percent of citizens would give their votes to the HZDS. The HZDS won the parliamentary elections in September 2002 with 19.5 percent. Smer ended third in those elections, with 13.5 percent.

Nevertheless, Mečiar said that his party's position, shaken by the two recent mass defections, is now stable, and that the HZDS can now start to focus on regaining some of the support it has lost.

"We are entering a new phase of existence for our party, [which is] currently the only one able to respond to the challenges of the times," said Mečiar.

Mečiar is entering this "new phase" with some old friends by his side. Among the guests at the congress was Ivan Lexa, former director of the Slovak Information Service (SIS), who received the warmest welcome from the summit's delegates, according to reports.

The former secret service boss has been accused of plotting the murder of police informant Róbert Remiáš while heading the SIS. The "political prisoner", as Lexa is frequently called by pro-HZDS daily Nový deň, was released from pre-trial custody on June 12, only two days before the party's congress.

"The question is, why should we distance ourselves from him? He is a member of the HZDS and he has not been convicted of anything," said Mečiar, adding that Lexa does not have any political ambitions and plans to spend time with his family and take care of his private affairs.

But these attempts to revamp the HZDS may not help the party out of opposition, as other politicians have indicated that they have seen too little change within the HZDS to consider it a credible partner.

"Despite certain progress, the HZDS still has a very long journey ahead of it before it can convince the Slovak political scene that it has any coalition potential," said deputy speaker of parliament Béla Bugár, leader of the ruling Hungarian Coalition Party (SMK).

"Mečiar has been re-elected and therefore as far as collaboration with the HZDS is concerned, nothing has changed," said Smer MP Pavol Paška in the daily Národná obroda.

Smer representatives have repeatedly stated that collaboration with the HZDS is possible, but not with Mečiar leading the party.