WALK into the beer section of a Bratislava supermarket, and you're confronted with a spectacle of plenty. More then two dozen products line the shelves, with more than a dozen distinct brands.
And that's only counting the Slovak stuff. The shelves also contain a few Czech beers, priced at a premium, which some connoisseurs insist taste better than the local brew.
As a public service to our readers, The Slovak Spectator decided to test this claim, as well as provide a guide through the labyrinth of choosing a Slovak beer among so many contenders. We assembled a panel of five - four passionate beer drinkers, plus a wine lover who enjoys the occasional beer. Nationality broke down like this: two Slovaks, two Brits, and an American. 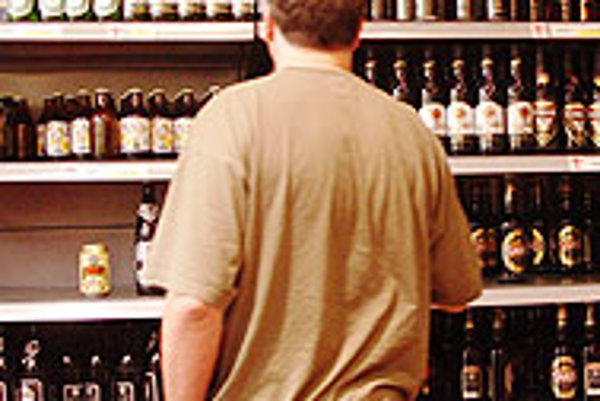 Font size:A-|A+0
WALK into the beer section of a Bratislava supermarket, and you're confronted with a spectacle of plenty. More then two dozen products line the shelves, with more than a dozen distinct brands.

And that's only counting the Slovak stuff. The shelves also contain a few Czech beers, priced at a premium, which some connoisseurs insist taste better than the local brew.

As a public service to our readers, The Slovak Spectator decided to test this claim, as well as provide a guide through the labyrinth of choosing a Slovak beer among so many contenders. We assembled a panel of five - four passionate beer drinkers, plus a wine lover who enjoys the occasional beer. Nationality broke down like this: two Slovaks, two Brits, and an American.

Our method was simple. We went to a Bratislava supermarket with a huge beer section, and ushered two of almost everything we found into our cart, like hops-obsessed Noahs preparing for a storm. Then we hauled them home, chilled them slightly, and unleashed them one by one on our panel, in small unmarked paper cups. We also served unsalted crackers and mineral water for palate cleaning between sips.

The panellists were instructed to rate each beer on an ascending scale from one to 10, as well as to scribble descriptive comments. In all, they swirled, sniffed, and tasted a total of 25 beers in one sitting - 23 Slovak products with two Czech ringers thrown into the mix.

Some surprises emerged amid the wisecracks and the burps.

First, in a beer market dominated by huge multinationals, the scrappy, Bratislava-based independent brewery Stein won the highest marks among Slovak beers in both the dark and non-dark categories. Stein's dark (tmavé) beer led the way with an average score of 7.7 points. One strong supporter simply described it as "mmmm, mmmm!" Another found "cocoa flavour," a remark echoed by yet a third panellist. Even its most tepid judge, who gave it 6 points, found it "smoky, malty" - usually seen as high praise for a dark lager.

Stein's non-dark (svetlé) beer, with 7.6 points, was outscored only by one of the Czech impostors, Pilsner Urquell. Stein Svetlé appealed to all of our tasters, drawing at least 7 points from each. The most intriguing comment was "herby flavours, borovička-like". (Borovička is the popular Slovak distillate flavoured with juniper berries - often home-made and as subtle as a slap in the teeth.) Another found it "quaffable, with a nice hop finish". Interestingly, one taster described it simply as "bitter" - this person gave it 9 points - while another, less supportive panellist called it "pleasant, not too bitter".

Value-for-money enthusiasts should note that Stein Tmavé was the cheapest dark beer we tasted, and Stein Svetlé ranked among the cheapest non-dark beers.

Another surprise was that while the Czech beers - represented by the popular Pilsner Urquell and Budvar non-dark products - showed well, they did not dominate. Pilsner Urquell, produced by the global beer giant SAB-Miller, did win top marks with 7.8 points. But it only just beat out the two Stein beers. Its strongest fan gave it 10 points, calling it, cryptically, "the most beer-like so far" (it was the ninth beer tasted). Another supporter found it "integrated, with a long finish, well-hopped". That last judgement was echoed by four of our five panellists. Clearly, this is a beer for hop fans.

Budvar, placed by some critics among the world's greatest beers, made a relatively poor showing, tying for seventh place among non-dark beers with an average of 6.5 points. One taster picked up "artificial" notes, while another detected "mineral" flavours. Its strongest supporter found it "well-knit, perfectly hopped"; another fan called it "full-flavoured, soft," but described its texture as "watery".

The most expensive beer in our tasting, Budvar clearly didn't excite most of our panel very much.

Other interesting trends emerged from the evening. We tended to like Slovakia's dark beers (there were no Czech darks in the competition). The lowest-scoring dark, Topvar's Zochar product, averaged 5.7 points - enough to beat out six of the 19 non-dark beers. The second-least-appreciated dark, made by Corgoň, drew 6.35 points, which would have placed it in the top half of the non-dark category. One caveat: Panellists tended to find the dark beers overly sweet. Even top-rated Stein was described by one otherwise enthusiastic supporter as "too (damned) sweet".

Also notable, the behemoths that dominate the Slovak market - Heineken and SAB-Miller - are making respectable beer here. Heineken's Kelt product wowed most on our panel, coming in third among non-dark beers with a 7.4 average. Its strongest proponent, who rated it 10, declared it "just right"; another called it "orangey, drinkable"; while another found it "well put together", with "citrus notes". Its one detractor gave it just 4 points, adding simply, "yuck!"

Heineken's flagship Zlatý Bažant svetlé did less well, placing ninth among non-darks with a 6.2 average. It ranked as one taster's favourite; this person gave it 9 points, finding orange notes and praising its "long flavour". Another compared its texture to that of water, and derided it as a "boring hoppy ... beer".

SAB-Miller scored a hit with its Šariš Tmavé product, which drew a 7.4 average, good enough for second place among darks. Even its least-enthusiastic supporter (6 points) found "smoky, soft, long flavours"; others detected "cream" and "chocolate syrup" notes; and a fourth praised its "fruit-like" profile. SAB-Miller also made a solid showing with its flagship Šariš Svetlé, which drew a 6.6 average, placing it sixth among non-darks.

A final trend worth noting: Our tasters showed a clear preference for high specific-gravity beers (see sidebar). Specific gravity is the number that appears on Slovak beer labels beside a degrees symbol. In general, the higher the specific gravity, the richer and fuller the beer will be. Particularly in the case of non-dark beers, low specific gravity specimens ended up massed toward the bottom of the preference scale.

How does one proceed after tasting 25 beers in one evening? Our panel reached a consensus. Open a bottle of the beer you rated highest and then spoon up a big bowl of fresh home-made goulash, ideally made from the special recipe of someone's Slovak father.