SINCE its November 2001 purchase of nearly 95 percent of Slovakia's second-largest bank, Všeobecná úverová banka (VÚB), Italy's Gruppo Banca Intesa has been working to transform the former state bank into part of a regional banking powerhouse, and to make financial services more accessible to Slovak businesses and individuals.
Currently, VÚB is the Slovakia's largest bank in terms of capitalisation, and second-largest in terms of assets. On the Slovak financial-services market, VÚB holds a 22 percent share of total deposit volume and a 14 percent share of loans.
Ahead of Italy taking over the EU's rotating six-month presidency on July 1, The Slovak Spectator spoke to Gianfranco Mandelli, representative of Gruppo Banca Intesa and vice chairman of VÚB's supervisory board, on the effects of EU entry on Slovakia's banking sector, the process of bank privatisation in Slovakia, and developments in the country's investment climate. 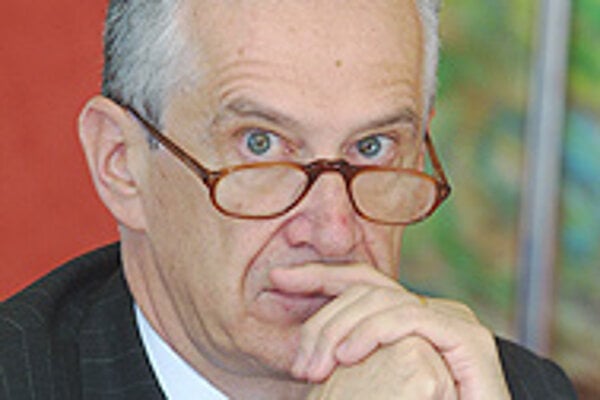 Font size:A-|A+
SINCE its November 2001 purchase of nearly 95 percent of Slovakia's second-largest bank, Všeobecná úverová banka (VÚB), Italy's Gruppo Banca Intesa has been working to transform the former state bank into part of a regional banking powerhouse, and to make financial services more accessible to Slovak businesses and individuals.

Ahead of Italy taking over the EU's rotating six-month presidency on July 1, The Slovak Spectator spoke to Gianfranco Mandelli, representative of Gruppo Banca Intesa and vice chairman of VÚB's supervisory board, on the effects of EU entry on Slovakia's banking sector, the process of bank privatisation in Slovakia, and developments in the country's investment climate.

The Slovak Spectator (TSS): Why did your company decide to invest in Slovakia?

Gianfranco Mandelli (GM): Our long-term strategy is to build an important European financial group and consolidate our presence in central and eastern Europe. Slovakia is close to Hungary, where we already have a meaningful presence through CIB, a 100 percent subsidiary. The experience we gained in the privatisation of PBZ in Croatia, the second-largest bank in the country, gave us reason to believe, rightly so, that the process could be repeated in Slovakia.

In other words, investing in Slovakia gives us synergy at the international level in a homogenous area where we want to see a more customer-oriented approach, with the ability to create innovative products for the retail and corporate sectors, with particular emphasis on small and medium-sized enterprises (SMEs).

Another factor that prompted our group to become a major player in the area is the important presence of Italian companies throughout the region. Italy is a very significant trading partner in central and eastern Europe, and now ranks as the third most important trading partner for Slovakia [behind the Czech Republic and Germany - ed. note]. The consolidation of the private sector has given a boost to Italian SMEs, which consider Slovakia a privileged partner for their own international expansion.

TSS: What does Slovakia have to offer Italian investors in particular?

GM: In general, I think that what Slovakia can offer foreign investors stems from its good geographical location and its low labour costs, coupled with the availability of well-educated and skilled staff, a favourable macroeconomic environment, and until this year, significant tax incentives.

From next year, the country will probably have one of the most modern tax systems in Europe. There are also labour-market policies offering subsidies for the creation of new jobs and staff retraining, as well as a progressive customs policy towards the import of new technology.

I think it is also important that many governmental and international institutions such as the European Bank for Reconstruction and Development, the World Bank, the German Development Bank, and the National Agency for Development of Small and Medium-Sized Enterprises are providing funds to the Slovak Republic for accelerating its restructuring process.

All of the points above clearly apply to Italian investors, who can also benefit from the treaty preventing double taxation between Italy and Slovakia.

TSS: Can you describe the investment climate in Slovakia, particularly in the banking sector, highlighting the positive and negative elements?

GM: The overall positive investment climate that has attracted foreign direct investment (FDI) into Slovakia does have some drawbacks. These include aspects such as poor law enforcement, a rigid labour market, and a certain degree of corruption that is triggered, for instance, by bureaucracy and the lengthy procedures for setting up a new company. This kind of highly frustrating delay somehow "forces" the issue of corruption by increasing attempts to find shortcuts to reach a goal.

As for the Slovak banking sector, I think it is currently among the most stable in central and eastern Europe. From the perspective of capital adequacy, the Slovak system is, in comparative terms, twice as strong as the system in either Austria or Germany. This idea, though not sufficiently communicated to the public, can be directly attributed to successful privatisations.

Moreover, EU entry in May 2004 should stimulate investments into the country and should engender dramatic growth in the population's disposable income and overall wealth. Entry into the EU will also create the opportunity for banks to increase the level of financing available for private individuals and enterprises.

TSS: How else will EU entry affect the banking sector in Slovakia?

GM: In principle, entry into the EU will not have an immediate impact on the banking sector, because most of the Slovak banks are already owned by foreign entities, and the majority of legislative changes required to satisfy EU requirements have been implemented already. A majority of products and services provided by Slovak banks are approaching in quality and variety what is offered by banks operating in the EU.

Possible further changes can be connected to the consolidation of the European banking sector and the introduction of the euro currency into the Slovak economy [not expected earlier than 2006 - ed. note].

TSS: Can you describe your experience with the Slovak privatisation process in general?

GM: I was not directly involved in VÚB's privatisation process, nor did I have hands-on experience of other Slovak privatisations.

Nevertheless, I can say that Gruppo Banca Intesa has had quite a positive experience in dealing with all relevant parties engaged in the privatisation of VÚB. We are grateful to the Slovak government for having ensured transparency throughout the tender process.

TSS: When you took control of VÚB, you restructured the bank. What did you do, why, and how effective has it been?

GM: After the completion of the privatisation process at VÚB in late November 2001, Gruppo Banca Intesa became the owner. In December 2001, a new VÚB strategic plan for 2002 to 2004 was agreed upon, and soon thereafter, in January 2002, a major turnaround programme was launched.

This programme involved more than 200 VÚB employees in active project-management and support roles, together with some Intesa and external professionals who were providing assistance and guidance.

The programme was divided into seven project streams, addressing both strategic business-enabling activities and governance restructuring. As early as April 2002, a new organisational model for the VÚB head office had been implemented, and the team continued the work of defining new budgets and planning projects, better optimisation of capital allocation, different approaches for market risk and credit management, optimisation of credit processes in terms of risk assessment and quality control, coupled with a better customer service, and a campaign to communicate our new image.

VÚB has completed the period of restructuring and is now focusing on changes to various internal processes in order to increase efficiency. The commercial focus will now be on the development of retail banking and SME lending.

Moreover, since human capital is the foundation of the bank, a strong focus will also be placed on the development and improvement of the skills of our workforce.

The changes that the bank has undergone have been challenging and the search for a symbiotic relationship between the old and the new has not been easy. Nevertheless, the bank is successfully building on existing foundations and applying the latest knowledge from the world of modern banking.

Overall, I can say that Gruppo Banca Intesa is pleased with what has been achieved so far in terms of restructuring, and continues to stand ready to provide VÚB with support and know-how so that our Slovak subsidiary can achieve its goal of becoming the best bank in Slovakia.

TSS: A few months ago, VÚB was the victim of unsubstantiated rumours that led to many customers withdrawing their deposits. How long did it take for the bank to fully recover from that incident?

GM: Rumours were going round for several days, but within a short period of time the situation had stabilised and deposits started growing. VÚB proved its strength in the way that it managed the entire process with its own resources and did not have to ensure liquidity by borrowing from either the National Bank of Slovakia (NBS), or other banks.

The financial strength of VÚB was also confirmed by the Fitch rating agency which soon after these events took place gave our bank a stable rating, which we consider proof of the high quality of the bank, its employees, and products.

TSS: A similar thing happened to Tatra banka some years ago. What can a bank do to protect itself from damaging rumours - and what is VÚB doing?

GM: It is difficult to prevent such rumours. Even if a bank is given support by the NBS - as was in our case when, at a critical moment, the central banking authorities kindly attested to VÚB's financial soundness - preventing the negative rumours from spreading is a challenging task.

The best thing banks can do is to proactively work on building up their image so that their clients won't yield to unjustified and unreasoned speculations and considerations, which damage their reputation, even clients themselves. In such cases the banks cooperate closely and help each other so as to manage the pressure on liquidity.