The city of well-being

"THE CITY of Trenčín has been full of anticipation for the festival for several weeks," Trenčín's mayoral spokesperson Stanislav Bejda said at a Bažant Pohoda press conference on July 8.
Slovakia's largest open-air music festival, Bažant Pohoda, starts next Friday, July 18. Dozens of bands from 20 different countries will be performing for two days. But despite the fact that the festival is entering its seventh year, this was the first time that a representative of Trenčín was present at the conference.
"This is the first time the city decided to support the festival [financially]. The first years were a struggle," said Michal Kaščák, the organizer of Bažant Pohoda. 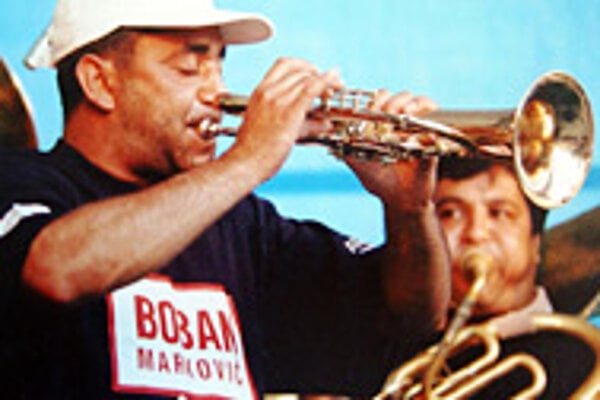 Font size:A-|A+
"THE CITY of Trenčín has been full of anticipation for the festival for several weeks," Trenčín's mayoral spokesperson Stanislav Bejda said at a Bažant Pohoda press conference on July 8.

Slovakia's largest open-air music festival, Bažant Pohoda, starts next Friday, July 18. Dozens of bands from 20 different countries will be performing for two days. But despite the fact that the festival is entering its seventh year, this was the first time that a representative of Trenčín was present at the conference.

"This is the first time the city decided to support the festival [financially]. The first years were a struggle," said Michal Kaščák, the organizer of Bažant Pohoda.

The middle of July has become a date marked in the calendars of Slovak music lovers., and hordes of them hit the roads to get to the western Slovak city of Trenčín.

Bažant Pohoda's seven stages will feature rock, pop, drum and bass, jazz, punk, techno and electro music, world music, dance music, and alternative genres. The Swedish band The Cardigans, which is currently touring the world with its new album Long Gone Before Daylight, will headline this year's festival. The five musicians will perform songs from their new album on Friday at 19:30.

The Saturday headliners, the British drum and bass band Kosheen and the Belgian electronic trio Hooverphonic will appear on the main stage at 21:15 and 23:30, respectively. Also performing on other stages will be the British dance group Dreadzone and Jamaica's Skatalites. The British trio will perform on Friday at 23:15, and The Skatalites, playing reggae and ska music, will take the stage on Saturday at 22:45.

"They [The Skatalites] are old but on the stage, they are fantastic," says Kaščák, adding that the average age in the band is over 70.

Among others, there will be the 12-member Boban Markovič Orkestar from Serbia, whose bright trumpet-music was featured in Emir Kusturica's movies Underground and Arizona Dream. Also appearing will be the female group, Havana Open from Cuba, Czech legends Ondřej Havelka and his Melody Makers, and Čechomor with its traditional folk in a rock style. Slovakia's Horkýže slíže, Le Payaco, Hex, Slobodná Európa, Chiki liki tu-a and Polemic will represent the home scene.

The handful of films that will be screened during the event are mostly Slovak and Czech, but at 23:30 on Friday non-Slovak speakers can get a break from music while watching Charlie Chaplin's The Great Dictator. For sport enthusiasts adrenalin activities such as bungee trampoline and tandem jumps from a plane will be provided.

This year the festival will be held in a large open-air zone with camping grounds in the northern part of the city of Trenčín. Although organizers plan to stage the festival in a new place next year, their thinking does not cross the borders of the city.

"We hope that the festival's tradition and the cooperation with the city's government will initiate a new motto for the town - Trenčín, mesto pohody [Trenčín, The Town of Well-Being]," says Kaščák.

MICHAL Kaščák has been the soul and body behind the Bažant Pohoda music festival for seven years. After being the frontman for the alternative Slovak band Bez ladu a skladu, which disbanded in 1997 but still plays occasionally, he went electronic and in 2000 officially started a new project called Neuropa. The Slovak Spectator spoke to Kaščák about the Bažant Pohoda festival on July 8.

The Slovak Spectator (TSS): One of the headliners at this year's Bažant Pohoda is The Cardigans. How difficult or how easy is it to get such music stars to come to a Slovak festival?

Michal Kaščák (MK): It is much easier today than it used to be. Slovakia didn't have a good reputation [back then]. Some of the foreign musicians who were invited to play here had to face certain problems, such as that they were not paid the exact money [as was negotiated], or the conditions they asked for were not fulfilled. We have managed to break this distrust by trying to manage the festival the best way we can. Over the last few years, I can say that musicians like The Fun Lovin' Criminals and the Stereo MC'S were satisfied.

Our festival has a good reputation among foreign agencies. The only problem that limits [the festival's development] is that Slovakia is a small market. The managers of such big stars look at the number of CDs sold in the country.

TSS: How famous is Bažant Pohoda in the world?

MK: This year, we became a member of the European festival organisation Yourope, whose members are such festivals as Roskilde in Denmark and Sziget in Budapest. Altogether there are 30 festivals. Thanks to this, people are getting to know about us, and the cooperation between other festivals and us is improving. The agencies or the agents of individual musicians havestarted contacting us on their own saying that their musicians would like to play at our festival. We are happy to see that the awareness about this festival is quite wide-spread.

TSS: You started the festival. What expectations did you have in the beginning?

MK: Our greatest luck was that we never had high expectations. The festival has been developing in a natural way, from a small event for 1,500 fans to a large happening attended by 20,000 people. Gradually, more people have joined our team and shaped the festival into what it is today. We never thought that the festival would get as far as it did, and I have no idea where we will be in the future. But we already have ambitions - to make the festival better every year. And this is basically what we have tried to do from the beginning.

TSS: The venue of the festival is going to change. Where will it be held next year?

MK: It's not been decided yet. It depends on several people. So far, our favourite is the Trenčín airport.

TSS: So, it will stay within the city of Trenčín?

MK: Yes. Cooperation with the town has improved and holding the festival in this city has become a tradition.

TSS: The first band you founded, Bez ladu a skladu, will return to the stage during this festival. Why? Will you perform as well?

MK: Yes, of course - that was the answer to the last part of the question. We are saying goodbye to the festival's place, so we decided to get together and play there. Also, we have not performed together for quite some time. The last time was 2000.

TSS: What songs will you perform?

MK: Only the old ones. It will be a digest of what we played during the fifteen years of our existence.

TSS: Do you think you will get some good weather this year after two years of rain?

MK: We know for certain that there will be weather, but what kind of weather, nobody knows. For instance in Britain, nobody cares about the weather, as it is raining most of the time. We do everything we can to make sure the festival runs smoothly during any kind of weather. But we believe this year we will get some sunny days, since we've already had enough rainy ones.