MILITARY prosecutors have announced that members of the country's intelligence agency illegally tapped the phones of the editorial staff of the daily SME, one of Slovakia's most widely read newspapers. That revelation, followed by the finding that the prosecutors themselves were illegally monitored during the investigation, has put the stability of Slovakia's democracy into doubt, experts say.
The affair started in January of this year when Pavol Rusko, head of the ruling New Citizen's Alliance (ANO), received a tape containing a conversation he had had with a SME reporter. 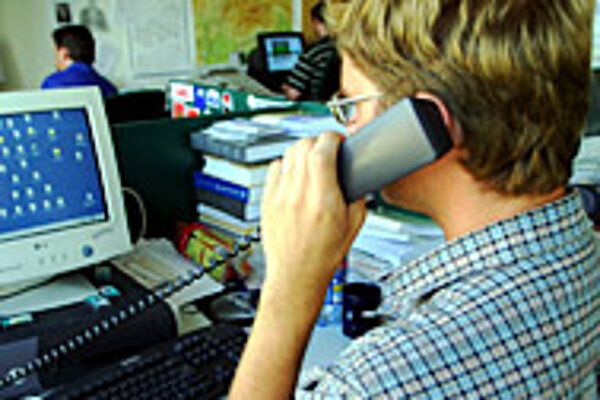 Font size:A-|A+
MILITARY prosecutors have announced that members of the country's intelligence agency illegally tapped the phones of the editorial staff of the daily SME, one of Slovakia's most widely read newspapers. That revelation, followed by the finding that the prosecutors themselves were illegally monitored during the investigation, has put the stability of Slovakia's democracy into doubt, experts say.

The affair started in January of this year when Pavol Rusko, head of the ruling New Citizen's Alliance (ANO), received a tape containing a conversation he had had with a SME reporter.

A recording of that interview, done without the required permission, was later found in the tapping system of the Interior Ministry. At that time Rusko believed himself to be the target of the ministry's surveillance and called for the resignation of Interior Minister Vladimír Palko.

However, Palko claimed that the Slovak Information Service (SIS), which he said administers the phone surveillance system, was behind the bugging. Then SIS boss Vladimír Mitro said the systems the ministry and the intelligence service use are independent and denied allegations of his agency's involvement in the case.

Mitro resigned from his post after conflicts between the ministry and the SIS escalated on March 11 and was replaced in the top seat by former interior minister Ladislav Pittner.

Military prosecutors took over the investigation in late January, a standard move in cases involving police personnel, according to Attorney General Milan Hanzel.

Those prosecutors now say their work is done.

"The recordings were made in the SIS system and Rusko himself was not being tapped," said chief military prosecutor Dobroslav Trnka at a press conference on July 11.

The finding that it was in fact the phone at SME that was monitored did not come as a complete surprise.

"The technical question of who was being tapped has not been resolved," said Robert Kaliňák, head of the parliamentary defence committee, at the beginning of February, confirming the existence of "various factors that do not indicate that it was Rusko, who was being bugged".

Nevertheless, the confirmation of these suspicions caused outrage among many. Petit Press, the publisher of SME and co-owner of The Slovak Spectator, announced plans to file criminal charges against the unknown perpetrator and is considering filing a complaint with the Constitutional Court.

"We deem this to be a serious infringement of media freedom and independence, because any illegal monitoring of reporters can expose their information sources and influence their work," said Alexej Fulmek, Petit Press director in a statement released in reaction to the military prosecution's findings.

"If the daily SME was tapped, any media in Slovakia can be," said Fulmek, who added that such a violation of the media's rights represented "an attack on the very foundations of a democratic establishment".

In a front-page editorial in the daily, SME editor-in-chief Martin Šimečka expressed his disappointment.

"This government seems to have forgotten that without democracy, freedom, and the protection of privacy, all its reforms will be worthless," wrote Šimečka, calling similar illegal practices a "cancer" attacking democracy.

"Such practices are a threat to democracy, media independence and free journalism. The SSN therefore asks for the entire case, which has left a dark stain on Slovakia's good reputation, to be thoroughly investigated," reads a statement issued by the organisation.

However, not only local activists worry about the developments in Slovakia. The International Press Institute (IPI), a global network of editors, media executives, and leading journalists from over 115 countries, voiced its concerns in an open letter sent on July 14 to President Rudolf Schuster and Prime Minister Mikuláš Dzurinda.

"IPI believes tapping of phones without a court order represents undue harassment of the media and is an extra-judicial act," wrote IPI director Johann Fritz in the letter. The activities of the SIS represent a violation of the UN declaration of Human Rights and the European Convention for the Protection of Human Rights and Fundamental Freedoms, according to Fritz.

The report on the results of the investigation, 95 percent of which Trnka said was "top secret", has been delivered to the country's top three officials - President Rudolf Schuster, Prime Minister Mikuláš Dzurinda, and Speaker of Parliament Pavol Hrušovský, as well as to head of the parliamentary defence committee Kaliňák and head of the SIS supervisory committee Viliam Soboňa.

Trnka said 58 witnesses have been interrogated, many of them several times and there was no witness that refused to testify.

The investigation revealed that a total of 11 calls were monitored by persons from within the SIS and later uploaded into the system of the Interior Ministry.

The prosecution has been brought to a halt due to the lack of evidence against specific perpetrators, although in the final stage the number of suspects had been reduced to eight SIS members, said Trnka.

"The eight SIS members implicated as suspects by the military prosecutors in the wire-tapping case are no longer on active duty," reads a statement provided by the SIS to the SITA news agency on July 14.

In the statement the SIS has pledged to carry out a thorough internal investigation, including lie-detector testing of suspected members. The service also says access to the phone-tapping devices is being more closely followed and restricted.

Despite the revelation that SIS personnel and equipment were involved, it may be difficult to assess to what degree the activity of responsible individuals was coordinated.

"There are various groups within the service, which act independently. They serve the political scene, probably both the coalition and the opposition," said Ivo Samson, analyst with the Slovak Foreign Policy Association for the SITA news wire.

"If the SIS is not controlled from the centre it means that it cannot be trusted," Samson added.

The degree of participation of former SIS leadership therefore remains uncertain. When asked whether former SIS boss Mitro knew about the activities of his subordinates, military prosecutor Trnka replied: "I cannot rule that out. He was the director of the SIS responsible for the entire functioning of the service. The findings do not imply that he knew about it."

Mitro himself has denied the charges and at the same time was sceptical about the chances of the recordings being made behind his back.

"Naturally, you can not rule anything out. However, in this case, since I knew the system which was [in place in the SIS] it is, according to my information, impossible," he said in an interview with Radio Twist.

However, the case did not end with the tapping of SME.

Head of the parliamentary defence committee Kaliňák quoted the prosecutors' final report on the investigation as saying that the investigators who dealt with the case themselves were under surveillance and had their phone calls monitored.

Kaliňák said that whoever was behind this activity made no secrets about it. On the contrary, investigators received recordings of phone calls made by their colleagues from the investigation team.

Furthermore, Kaliňák said that while Trnka was working on the case his car had been stolen directly from outside the Interior Ministry, only to be returned a day later parked in front of a military facility.

"The fact that this happened to military prosecutors is in my opinion a direct attack on the foundations of democracy," Kaliňák told Radio Twist.

According to Kaliňák, the military prosecution was unable to determine who was behind the attacks and he himself refused to speculate on the issue.

"The SIS can confirm that the service's internal probe will not omit this information," said SIS spokesperson Vladimír Šimko in an interview with Twist.

"At the same time we must unfortunately say that there are indications that members of the [former communist-era secret service] State Security (ŠtB) do not accept the public consensus that they should leave the state service," he added.

According to a report on SIS activities presented by SIS boss Pittner drawn-up in May of this year, 12 percent of the agency's current members are former ŠtB collaborators. On June 19 Pittner told members of parliament that he plans to rid the service of ex-ŠtB staffers by the end of this year.