CHURCH officials said that a recently passed treaty with the Holy See on Catholic education in Slovak schools would improve morals in the post-communist central European state.
Cabinet ministers on July 9 passed a controversial sub-treaty with the Vatican, one of a total of four sub-treaties that follow a fundamental treaty with the Catholic Church signed in 2000.
The latest treaty secures full state funding for all Catholic schools and guarantees classes on religion for children at all state schools from the first grade, normally at the age of six. 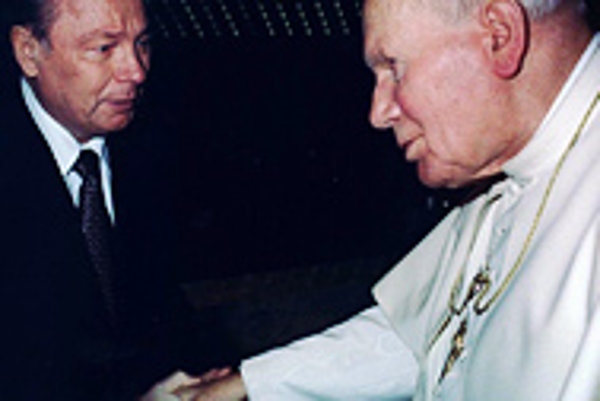 Font size:A-|A+
CHURCH officials said that a recently passed treaty with the Holy See on Catholic education in Slovak schools would improve morals in the post-communist central European state.

Cabinet ministers on July 9 passed a controversial sub-treaty with the Vatican, one of a total of four sub-treaties that follow a fundamental treaty with the Catholic Church signed in 2000.

The latest treaty secures full state funding for all Catholic schools and guarantees classes on religion for children at all state schools from the first grade, normally at the age of six.

The sub-treaty has stirred feelings within the opposition and left wing, and has also divided the ruling right-wing coalition with one of its four parties, the liberal New Citizen's Alliance (ANO) refusing to support the treaty. Backed by several opposition parties, ANO said the treaty should not be signed without parliamentary approval.

ANO dubbed the treaty discriminatory saying it created unfair conditions for students who are not religious and that it was "putting canonical law above state law", according to ANO leader Pavol Rusko.

But local church officials such as spokesman for the Slovak Conference of Bishops (KBS) Marián Gavenda dismissed those claims as "propaganda" against the Church and said that the treaty, once put in practice, would increase the morals in Slovakia, where around 70 percent of population claimed Catholicism as their religion in the most recent national census of 2001.

"Young people take drugs, children live in unstable families, and all this is a result of promoting a certain lifestyle," Gavenda told The Slovak Spectator.

"Parents often do not foster ethics or religion in their children and all who object to the treaty tend to ignore how destructive an effect the media has on this country pushing it towards a decline in values. In this situation Catholic and ethical education is necessary to increase the country's morals," Gavenda said.

But critics of the treaty, including Katarína Závacká from the country's Institute of State and Law, have dubbed the attitude "false".

"Why then is there so much crime in Italy for example, a country known for its strong Catholicism, including the influence of the Church in the area of education," she asked.

Opponents also said that through the treaties Slovakia was becoming an increasingly Catholicised state rather than one based on the principles of civil society.

"Catholicisation already began with the signing of the general treaty with the Vatican," Závacká said.

A group of opposition MPs recently asked the cabinet to change the original 2000 Vatican treaty so that passage of any sub-treaties is subject to a vote in parliament rather than the cabinet alone.

Last year Slovakia passed one sub-treaty on spiritual service in the country's armed forces while two more are in the pipeline. A so-called conscientious objectors treaty is currently being drafted at the Justice Ministry. The treaty would, for example, allow doctors to refuse to perform abortions and entitle teachers to refuse to teach subjects that are in conflict with their religious beliefs. Another treaty is expected to deal with the financing of the Catholic Church.

The treaty on Catholic education, meanwhile, promises full state funding to the existing 170 Catholic schools in Slovakia. Until now the state only fully funded those schools that complied with prescribed educational content approved by the Education Ministry.

The sub-treaty also obliges elementary schools to start classes in religion in the first grade as a so-called 'obligatory optional subject'. The alternative option for children would be ethics for which, critics said, there are no textbooks and the state would also have to invest into training more teachers to cover these lessons.

Although Education Minister and Christian Democrat Martin Fronc originally claimed that the signing of the treaty would not mean any expenses from the state budget, he later admitted some money would have to be spent.

Catholic schools would be free to omit teaching passages or subjects that oppose the Catholic doctrine, while kindergartens would also be obliged to provide Catholic lessons to toddlers if a sufficient number of parents ask for them.

Fronc said, however, that the state would offer the same conditions to all other registered churches in Slovakia provided their officials asked for it.

Gavenda of KBS also said that the treaty would not discriminate anyone because children who will not want to take religious classes would be able to enrol for classes on ethics.

"It is voluntary and the possibility of choice is secured," Gavenda said.

Závacká, however, has warned that implementing the treaty may result in parents suing the state for being left with no alternative other than sending their children to religious classes due to the lack of teachers, mainly in small country schools.

Fronc, as well as several church officials, has said, however, that signing the sub-treaty in September would be "a nice present" for John Paul II who is scheduled to visit Slovakia September 11-14.

But opposition Smer politician Robert Kaliňák said that if the cabinet signed the treaty before the end of parliament's summer recess, it would be necessary to discuss a no-confidence motion against the cabinet.

Gavenda of KBS insisted that he did not understand the furore surrounding the treaty and said it was a "document signed by two equal subjects, in which they agree on areas of common interest".

"The Vatican treaty has just five pages and everyone can read it. For example the treaty on Slovakia's accession to the EU has around 5,000 pages and in that treaty Slovakia is giving up much of its powers to bodies of the EU. But no one questions that, do they," Gavenda said.