WHILE airlines around the world have been reeling from changes in the passenger travel market over the last two years, a small, low-cost carrier in central Europe has been bucking the trend and driving the development of Slovakia's air transport sector.
After beginning operations with a single 30-seat airplane in February 2002, Bratislava-based SkyEurope has expanded to five aircraft, become the country's dominant non-charter passenger carrier, and recently completed the first ever regularly scheduled commercial flight between the Slovak and British capitals. 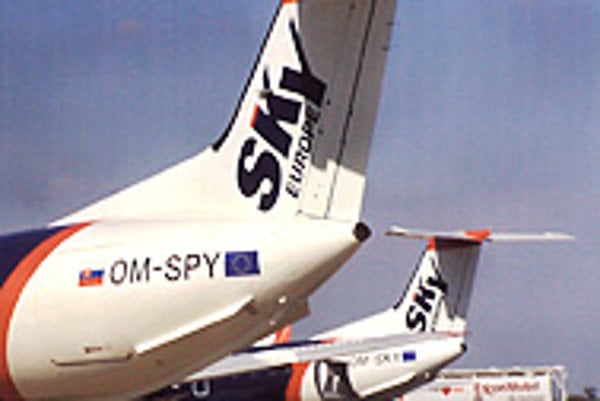 Font size:A-|A+
WHILE airlines around the world have been reeling from changes in the passenger travel market over the last two years, a small, low-cost carrier in central Europe has been bucking the trend and driving the development of Slovakia's air transport sector.

After beginning operations with a single 30-seat airplane in February 2002, Bratislava-based SkyEurope has expanded to five aircraft, become the country's dominant non-charter passenger carrier, and recently completed the first ever regularly scheduled commercial flight between the Slovak and British capitals.

Although the official inauguration of the Bratislava-London route will be held on July 21, officials from SkyEurope say 129 of 133 seats were filled on July 11 when the company's new Boeing 737-500 made its first return from London's Stanstead to Bratislava's Milan Rastislav Štefánik airport.

"This is a big day, not only for SkyEurope, but for Slovakia," said CEO Christian Mandl to journalists after the flight.

Even before the new aircraft was imported in late June, officials from the airline said interest in the London route had far exceeded expectations.

"In the first month that tickets were offered for sale [between Bratislava and London], we registered more than 6,000 bookings, more than 80 percent of which were booked through the internet," said SkyEurope commercial director Pavol Mladý to the SITA news agency in mid-June.

Notably, added Mladý, more of the booked flights came from British travellers than from Slovaks, and interest was also strong among residents of Hungary.

Later this year, SkyEurope plans to introduce service between Bratislava and Paris Orly airports, and to increase service to London from three-times weekly to daily. The company already operates links from the Slovak capital to Munich, Berlin, Zurich, Stuttgart, Milan, Prague, Košice, and the Croatian coast, and plans a connection to Rome next spring.

The success of SkyEurope, an airline built on the low-cost model pioneered by the US' Southwest Airlines and Ireland's Ryanair, is a welcome development in Slovakia's civil aviation sector, which was described earlier this year by the European Commission's Eurostat office as the least developed among EU accession states.

Even as recently as 2000, virtually no regular flights left Slovakia for destinations in western Europe, and the country's state airline, Slovenské aerolínie, flew regularly only to Moscow, Kiev, and other airports that allowed it to land the Russian-built Tupolev jets Slovakia had received as repayment of Russian debt.

Of Slovakia's six international airports, only Bratislava in the west and Košice in the east offer regular flight destinations. The country's other airports - Piešťany in the west, Žilina and Sliač in central Slovakia, and Poprad in the east - are used mainly for charter and non-commercial flights.

Now, however, the country is in the midst of transforming the Slovak Airports Authority (SSL) from a central administrative body into individual companies, each operating one of the country's regional airports.

Bratislava and Košice airports, the country's two busiest, should be spun off by the end of this year, with the rest following in 2004. Initially, stock in the airport companies will be fully owned by the state, and later transferred to regional and local administrations in which the facilities operate.

The plan has been welcomed most warmly by Bratislava municipal officials, who say the move will allow them to open Štefánik airport to investors and more quickly complete construction, as well as using up the facility's free capacity.

In 2002 passenger traffic at Štefánik rose by 20 percent to on the year to 333,000 passengers, but the facility was designed to handle 1.8 million travellers annually.

Local administrators also say that the independent management of Bratislava airport will allow the facility to better complement Vienna's already congested Schwechat airport, only 60 kilometres away, in passenger and cargo transport, both of which have been steadily growing in Slovakia in recent years (see chart, this page).

Once the EU's Schengen border expands to include Slovakia and other accession countries, expected in 2006, border checkpoints between Slovakia and its western neighbours will be removed, reducing travel time between Bratislava and Vienna airports from the current 90 minutes to under an hour.

Nevertheless, said Michal Vicanek, president of Montreal-based Airport Planning Associates and part of a team that began putting together Slovakia's aviation restructuring plan in 1992, building bridges between the neighbouring capitals has proved slow.

"I've been hearing since 1993 about cooperation [between Štefánik and Schwechat], but I still haven't heard how Vienna specifically proposes to develop traffic at Bratislava," said Vicanek to The Slovak Spectator in May.

At the moment, the only direct connection between Schwechat and Štefánik is a shuttle-bus operated by SkyEurope, and completion of the D1 motorway that will connect the airports has been pushed back to 2006.

While more time will be needed to remove border hurdles and complete infrastructure, SkyEurope officials are confident that their choice of Bratislava as a hub was justified, and that there is plenty of room to grow in central Europe.

"We are the first low-cost airline in a low-cost country," said Mandl to The Slovak Spectator last year, explaining that operations and labour costs in Bratislava were far lower than in neighbouring Austria, allowing the company to pass on savings to consumers.

SkyEurope's fares to London, for example, start at €77 round-trip, including tax, but tickets must be booked well in advance to get the cheapest seats.

Nonetheless, tickets on SkyEurope were available in mid-August for €173, while an internet search for fares between Vienna and London at the same time returned offers ranging from $279 (€247) for a direct flight on Austrian Airlines to $1,098 (€974) for a trip curiously routed through Copenhagen.

"At the moment it is a crazy situation whereby people in London with lots of disposable income have access to very low fares, while people in central and eastern Europe, who have lower incomes, still pay very high fares," said Mandl.

"For SkyEurope, the strategy is not so much to compete with Ryanair in the west, but to explore the markets in the east that are still very much crying out for low fares," he said.