MOST of Slovakia's railway routes still in use today were built during the Hungarian railway rush that started in 1870. During that period, the monarchy stopped managing railway construction and financing, and the business came under the control of stockbrokers and speculators, rather than engineering innovators and visionaries.
All the new lines were built by workers (barabs) who came from northern Italy and southern Tyrol and endured desperate working and living conditions. 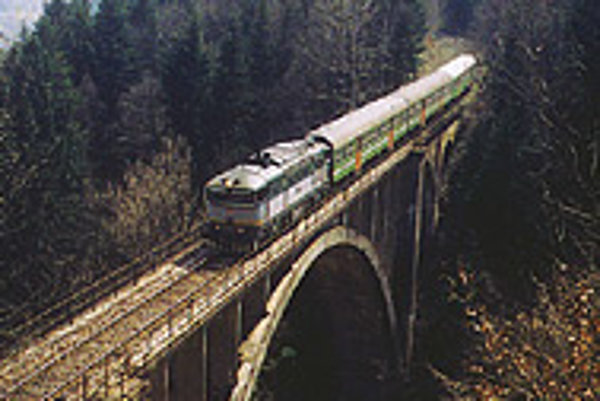 Font size:A-|A+
MOST of Slovakia's railway routes still in use today were built during the Hungarian railway rush that started in 1870. During that period, the monarchy stopped managing railway construction and financing, and the business came under the control of stockbrokers and speculators, rather than engineering innovators and visionaries.

All the new lines were built by workers (barabs) who came from northern Italy and southern Tyrol and endured desperate working and living conditions. These people, many of whom had cholera, lived in nearby villages, in wooden cabins, huts, holes dug into slopes and covered by logs, or under narrow gauge railway carriages. Construction was often delayed by heavy snow, storms, floods, landslides, and complicated geological conditions.

The first mountain railway route, running from Hronská Dúbrava to Horná Štubňa, was built between 1870 and 1872 under the management of Franz Glatz. It was called the Slovak Semmering after the famous first railway crossing of the Alps in Austria by Carlo Ghega in the middle of 19th century, which helped connect Vienna with Adriatic coast in Trieste.

The summit of the route is in Kremnické Bane, 775 metres above sea level. Because of cost cutting measures, there was no bridge on the entire route.

The construction was financed by the company Szent István kőszénbánya-részvénytársaság, which operated mines in Salgótarján, in today's northern Hungary, and needed to transport coal to Germany and the Baltic coast.

Likewise, the need to connect Tisovec with iron mills alongside the Hron river in Hronec and Podbrezová was the reason why the company Rimamurány-Salgótarjáni Vasmű Rt. built a cogwheel railway between Tisovec and Pohronská Polhora from 1893 to 1896 in central Slovakia.

The best use of this railroad was made in 1920s, when the Malohont iron mills exported iron and imported iron ore and coke, and wood was exported from local forests to Hungary.

The railway is cut into the vertical slopes of the narrow Furmanec valley, and its summit is in Zbojská at 725 metres. Currently, just adhesive, rather than cogwheel or rack, passenger operations remain on the line, but fortunately, under the sponsorship of a wealthy benefactor, two reconstructed locomotives from Romania will continue the cogwheel tradition for tourists in two years' time.

After the first world war, most new Slovak railways were built by Czech companies. Construction was centrally managed from Prague, and the purpose of lines was conceptual and more universal. In other words, a line was no longer built to transport ore from one specific mine to a mill, but rather, lines were built as part of a complex multipurpose system.

On the mountain route from Handlová to Horná Štubňa, built between 1928 and 1931, stone pillars were used instead of concrete on all the bridges because of a lack of skilled workers. The impressive viaduct in Handlová was built a little earlier, in 1912.

This part of the route, between Handlová and Prievidza, was built to transport coal from mines in Handlová. Four thousand workers, 3 percent of them foreigners, built this railway, which boasts a summit tunnel stretching for 3,011 metres. Seven people were injured during construction, and five more were hurt in the stone quarries supplying the materials. There were other casualties later, caused by the tunnel's bad ventilation, as locomotive personnel were forced to breathe air contaminated with smoke.

The construction of another mountain route from Červená Skala to Margecany, built between 1931 and 1939, was characterised by social conflicts, which led to many workers being shot by police. This route has a unique spiral tunnel near Telgárt, whose 2.3 kilometres helped trains climb 31 metres. The passenger steam trains that wanted to use this steep spiral tunnel had to reverse first, so they could build up the speed needed to get through the tunnel.

Above the spiral tunnel and under the Besník pass is a summit tunnel at an elevation of 955 metres. Between 7,000 and 9,700 workers from nearby poor villages and unemployed youths from all parts of Slovakia built this railroad. Construction saw just six casualties.

The masterpiece of all Slovak mountain railways is the route between Banská Bystrica and Diviaky. It was more effective to build this new route than to extend double tracks down the existing route between Hronská Dúbrava and Horná Štubňa.

There are 12 kilometres of tunnels on this route. The longest is the Čremošniansky summit tunnel at 693 metres, which is 4,698 metres long. The 40 kilometre route was built between 1936 and 1940 by 12,000 workers. Just 38 foreigners worked on it, reflecting the fact that gradually there were more and more local experts. As many as 2,266 workers were injured during the construction and 35 died. Even today, operations on the line are still affected by avalanches, cold winters with heavy snow, and the occasional visits of brown bears to small isolated stops along the way.