TWO years ago, on his 25th birthday, Tomáš Kováč received a fujara. He started browsing the internet to get some information about this wind instrument, but there was nothing. Quite disappointed, he decided to fill the void himself.
Inspired by the number of web sites offering information about the Australian aboriginal wind instrument - the didgeridoo, he created www.fujara.sk., a web site devoted to the fujara, in English.
"Why in English? If a Slovak wants to, he or she can easily find out about the fujara, there are many possibilities. 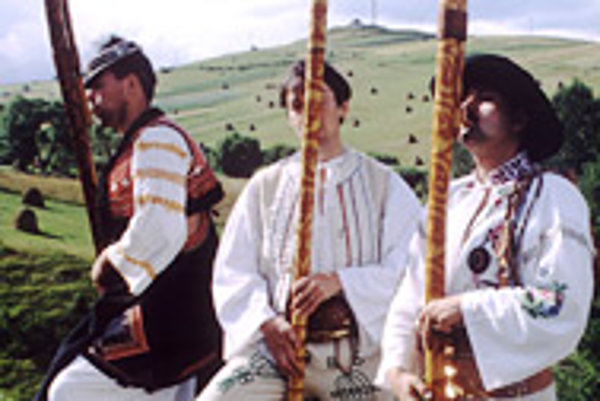 Font size:A-|A+
TWO years ago, on his 25th birthday, Tomáš Kováč received a fujara. He started browsing the internet to get some information about this wind instrument, but there was nothing. Quite disappointed, he decided to fill the void himself.

Inspired by the number of web sites offering information about the Australian aboriginal wind instrument - the didgeridoo, he created www.fujara.sk, a web site devoted to the fujara, in English.

"Why in English? If a Slovak wants to, he or she can easily find out about the fujara, there are many possibilities. But a person living abroad could not find out that there is a special instrument in Slovakia called the fujara and that it has a beautiful sound," Kováč says.

He began touring the country to built contacts with fujara players and fujara makers in March last year. At same time he started learning how to create internet pages.

The website was launched six months later and apart from the information on the instrument's history, development, and contacts to fujara makers, it offers also audio samples of various fujara players. Since the page's creation, many foreigners have visited it, some even purchasing the instrument online.

"The fujara is a typical folk instrument, almost two metres long, that cannot be found anywhere else but Slovakia," Kováč says, explaining that the only similarity between fujara and didgeridoo is that both
are wind instruments.

"The didgeridoo is basically a trumpet [without holes], whereas the fujara is an overtone fipple flute with three holes, but the height of the tone is decided mainly by the strength of air blown into the instrument. It is designed to play high up into the overtone series, with a soft haunting voice. It can also play the shrill tones common at the beginning of Slovak folk songs. No manufactured musical instrument is able to do that."

The instrument was invented by Slovak shepherds and its home is the central Slovak Poľana region, centred around the town of Detva.

In the nearby village of Korytárky, the Spolok fujarášov (Fujarists' Guild) has been active, bringing together fujara makers from around the country. Currently, it lists around 45 of them. Each October, the guild organises a public event
where fujara players and makers meet and exchange skills and experience.

"We recognise each other's products according to the patterns that are carved in the instrument," says Roman Malatinec, the guild's head.

And while every maker has a specific "handwriting", they often try to preserve the traditional fujara motifs. The most widespread pattern comes from the home of the fujara, the Detva region, and features natural motifs such as flowers and sheep. One of such makers using this motif is Viliam Kamenský, a native of Detva.

"When I was eight, my father brought my first fujara home, and I dismantled it. While doing that, I broke a vital part of it - the top. I had to cut it off and make a new one. By speculating how to make it, I learned the process. Later, when I improved, I started making fujaras for fun rather than money, and only this year I started selling them," says Kamenský, today in his 50s.

The most recognized folk instrument maker in Slovakia by many, is 65-year-old Tibor Koblíček from the tiny south-central village of Turíčky. He did not start making instruments before he reached 30, and now he finds it difficult to count how many different folk instruments he can actually make.

"Koblíček applies a new element in the surface finish - a deep cut, thus creating an original woodcarving piece of work of each instrument," says Kováč.

Although real fujara mastercraftsmen, like Koblíček, are of an older age, the instrument is not on the verge of extinction. More and more younger people are trying not only to learn playing the fujara but also to make their own.

"I am happy that the younger generation are showing an interest in fujara-making," says Kamenský, who was selling his products at the recent Shepherd Days festival in the northern village of Malatiná. Next to him 29-year-old Jaro Sloboda and 26-year-old Martin Brxa were offering their fujaras. And young visitors often stopped to inquire about the how the instruments were made, which from giving the wooden piece its shape to tuning the sound and final decorating might take weeks, even months.

Shepherds used to play the fujara while watching their flocks. It is believed that fujara melodies had a calming effect on the grazing sheep. The melodies were simple and slow, as shepherds' hands were less flexible due to a hard work.

"The fujara can play three whole octaves, but only two are usually used while playing traditional folk songs.

"Within these octaves, each whole tone and a few half-tones can be played. This means that any song can be played on a fujara, even a classical piece, which is composed of whole tones in the range of two and a half octaves. Once I heard a fujarist playing Mozart's Kleine Nachtmusik," adds Kováč, who has found out that learning to play fujara is quite easy as the instrument is meant for improvising, expressing the momentary mood of the player.

"Playing fujara is a matter of the heart," says Sloboda, the young fujara-maker.

And even though Slovak fujara-makers have a place to meet and exchange their ideas, they say they would like to see the Kováč's web page also in Slovak. Moreover, they think that Slovaks who do not speak English should also get the chance to learn about the real history of the fujara and its unique character via such an easily accessible media as the internet.

"I have already started working on the Slovak version," Kováč says.

"I would like to contact all fujara players and makers in the country and make the page an online meeting point for everybody."