The citadel of saintliness

THE BEGINNING of a folk song sung by the people living under Strečno Castle goes: "Tam okolo Strečna, cesta nebezpečná." (There around Strečno Castle, the road is dangerous.)
The song is about the nymphs that bathe and dance in the River Váh's waters. These nymphs would catch the raftsmen (pltníci) who used to float wood down river and dance them off to death. 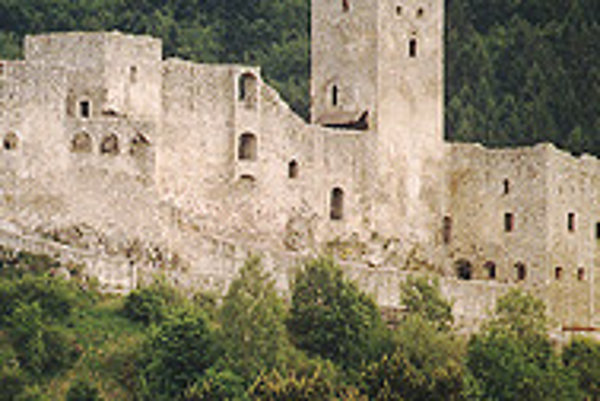 Font size:A-|A+0
THE BEGINNING of a folk song sung by the people living under Strečno Castle goes: "Tam okolo Strečna, cesta nebezpečná." (There around Strečno Castle, the road is dangerous.)

The song is about the nymphs that bathe and dance in the River Váh's waters. These nymphs would catch the raftsmen (pltníci) who used to float wood down river and dance them off to death.

Strečno Castle, together with the older Strečno castle called Starhrad, guards the entrance to the Malá Fatra national park. They also lure many visitors to the area.

Like many other castles in Slovakia, this gothic citadel was erected in the 13th century and served as a watch-fortress. The castle did not become truly important until the 14th century, when it became the centre of the central Považie region that sits aside the Váh river.

Throughout its history Strečno Castle has been owned by noblemen as well as kings. One owner of Trenčín Castle, Matúš Čák Trenčiansky (Maté Csák), nicknamed the Lord of the Váh and Tatras, also owned Strečno Castle.

Among the most famous owners of the castle were Ferenc Vesselényi and his wife Zsófia Bosnyák. Zsófia's saintliness and charity - she established a shelter for the poor and the little breads she gave them are still called bosniaks today - became the themes for two legends.

The first one is about Zsófia's longing for the true love of her unfaithful husband. Love-struck Zsófia prayed to God in the castle's chapel. When her husband saw her doing that, he realized that he had misbehaved, asked her to forgive him, and promised her his faithfulness.

The other legend has it that when cholera struck the region and many people died, Vesselényi swore at God for letting such a disaster happen. In protest, he refused to bury seven brothers who had died of cholera. Zsófia secretly buried them. Her husband ordered them dug up. When she buried them again, the people told Vesselényi what Zsófia was doing. Vesselényi then started watching his wife. After the burying and digging up happened once more, he accepted the power of God, and the cholera epidemic ended.

Zsófia died in 1644, and was buried in the castle crypt under the chapel. Her body, which was found 50 years later, mummified by the warmth and dryness of the castle crypt, is on display in a church in the nearby village of Teplička nad Váhom.

The castle's usefulness came to an end in the 17th century when King Leopold ordered it destroyed.

In the 1950s archaeologists surveyed the castle and helped to reconstruct part of it. Some objects, like the main gate, tower, and two palaces were reconstructed completely. In 1992, the castle was opened to the public.

Climb up to Strečno Castle. Explore the fortress and visit its permanent archaeological exhibition as well as a temporary display of clay objects with mythological motifs. Entitled Arts at the Castle II, the show runs until September 10.

From the castle descend to one of the local restaurants to taste the specialities of Slovak cuisine. Two traditional restaurants are situated on the edge of the village of Strečno in the direction of Žilina.

After lunch, take a cruise down the Váh river on a typical wooden raft. The tickets are on sale at a white booth situated in the parking lot in front of Penzión Irenka, around 100 metres from the castle. From there, a microbus takes you to the start of the cruise. The nearly one-hour ride ends at the parking lot.

Take an easy trip to the old Strečno Castle, Starhrad, situated on the other side of the Váh river from Strečno Castle. Cross the village's bridge (near the Penzión Irenka) and follow the red trail upstream along the river up to the castle's ruins. Part of the trail, however, is not marked well, but just keep on the main path.

A two-day festival of folk-rock music groups from Slovakia and abroad. The popular Czech band Čechomor will be performing this year.

A unique exhibition of typical Slovak tinkery craft consisting of more than 350 pieces. The display highlights the history and development of the craft, presenting everyday products as well as decorative works.

The village of Vlkolínec (a part of the Ružomberok municipality) is a living open-air museum of folk architecture. Added to UNESCO's World Cultural Heritage List in 1993, this museum includes 45 wooden dwellings from north-central Slovakia built at the turn of the 20th century. House No 17, Roľnícky dom (Farmstead) serves as a museum. Open Mon-Sat 9:00-17:00. Tel: 044/4322-468.

The village of Strečno is one of the gateways to the Malá Fatra national park, one of the most scenic natural areas in the country. Its peaks and valleys offer more than 200 marked hiking trails. The highest peak of the mountain range is Veľký Kriváň (1,709 m).

The trail to Suchý peak winds around the ruins of Starhrad castle,and starts at the same point as the climb to the castle - at the end of the Strečno's bridge. After passing the ruins, the red path continues to Chata pod Suchým (Cottage under Suchý) all the way up to Suchý peak. To return back to the village of Strečno, descend the peak by taking the red trail to Javorina, from where you follow the yellow trail leading to Strečno. The day-long hike is of moderate difficulty.

Starting from the bronze statue of Jánošíkin the village of Terchová, follow the road leading to Vrátna dolina valley (yellow marks). The hiking trails start at a small parking lot situated on the left side of the road behind the border of the national park. Take the green trail in the direction of Boboty up to Horné Diery, which is a rocky canyon with waterfalls and ladders. The green trail later switches to a blue one. Follow that to the Medzirozsutce sedlo (saddle). From there take the green trail up to Malý Rozsutec hill (1,343.5 m), and then down to the village Biely Potok. From there it is a short walk to Terchová.

Note: For these hikes it might be useful to consult the map Malá Fatra-Vrátna No 110, published by Vojenský kartografický ústav, Harmanec. Hiking maps are available in bookstores and information centres across Slovakia. Žilina information centre, CK Selinan, Burianova medzierka 4, Tel: 041/5623-171.