RAFTSMAN Maťo Oberta regales tourists with tales of Strečno Castle (in background) and Slovak rafting lore.##photo: Zuzana Habšudová## RAFTSMAN Maťo Oberta pushes the wooden raft (plť) filled with tourists away from the bank of the Váh river, jumps in and grabs an oar. Then he turns to the passengers and says: "If you fall in the river, nothing's gonna save you. The lower currents will pull you down, no matter what you do. I cannot swim, but what good is swimming [in such dangerous water]?" 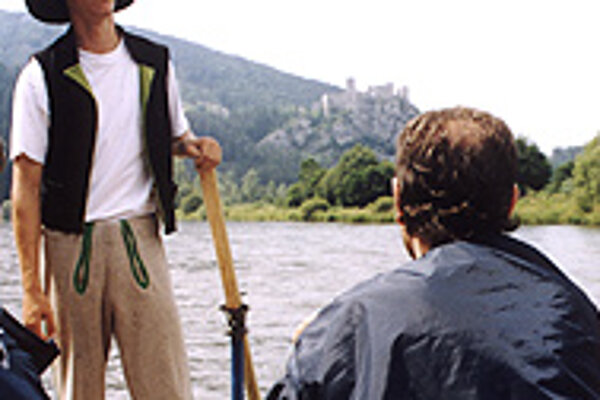 Font size:A-|A+
RAFTSMAN Maťo Oberta pushes the wooden raft (plť) filled with tourists away from the bank of the Váh river, jumps in and grabs an oar. Then he turns to the passengers and says: "If you fall in the river, nothing's gonna save you. The lower currents will pull you down, no matter what you do. I cannot swim, but what good is swimming [in such dangerous water]?"

After the warning, he and the other raftsman start paddling faster and faster as the raft crosses the river's rapids near a huge rock. The tourists, left completely in the hands of the rafters, have time to think about his words. But seeing the rafters skilfully manoeuvring through the first dangerous part of the 7.5-kilometre trip, their worries are eased.

"In the past, carrying wood down the river was a very dangerous task," raftsman Maťo says. "The rafts were made out of tree trunks of around 30 metres long, and the rafters had to know exactly to what direction and in which moment to turn the raft. If they failed, they would literally get milled in the currents."

Rafting in Slovakia originated in the 11th century, but the boom came during the 18th century. The rafters transported wood from up in the hilly regions down the rivers to the lowlands. In the past, they would float logs down the rivers Orava, Kysuca, Hron and Váh.

Rafters from moutainous regions would land at what is today Rybné Square in Bratislava, which used to sit on a tributary to the Danube river. The rafters on the Váh carried wood from the Orava and Liptov regions down to the Danube river, and then all the way to the Black Sea.

Between 1915 and 1935 rafting as a profession died away, as wood was then being transported by rail. Later on, rafters revived this kind of transportation as an attraction for tourists. Today, three Slovak rivers are being rafted - Váh, Orava, and Dunajec.

Rafting in the past

The rafts used for carrying tourists today are of a special design and their length usually does not exceed 10 metres. In the past rafts were made out of six to 16 tree trunks that were tied or nailed together, and reached up to 40 metres in length.

There were usually two rafters aboard; when the amount of the wood increased, so did the number of rafters. The maximum load one raft could handle was 180 square metres of wood, including the area of the raft. A cabin on the raft was built to the height of the eyes of the smallest rafter aboard, so that even he could see all around. To manoeuvre such a float required a lot of skill.

According to the rafters who float down the longest Slovak river, Váh, the parts most feared were the areas around two rocks described in the legend of Margita and Besná.

The legend has it that Margita's stepmother fell in love with the same boy that had caught Margita's heart. One day the two were fighting on a rock, and the jealous stepmother pushed Margita down into the wild waters of the river, where she drowned. That is how the Margita rock received its name. Later, the stepmother was mad at herself because of what she had done and jumped into the river from another rock and drowned. That rock is named Besná (Mad).

Today, the rocks are small stones innocently sticking up from the water. But in the past they formed a dangerous maze, around which the water flowed very fast. In the 1930s, the rocks were blown up with dynamite, and the material was used for building a nearby railway.

Today rafting serves as a way for Slovaks to remember their past. During a several kilometre-long cruise, the raftsmen, usually dressed in traditional folk costumes, talk about rafting history, narrate legends, and describe the surroundings.

One superstition that raftsmen used to believe in was that a woman should not ride a raft, as she carries misfortune. Another common practice was the prohibition of whistling on a raft, as the whistling could stir a bad wind. Obviously these superstitions are no longer held, but some rafters do not forget to remind passengers of the old rules.

Since rafts can only float downstream, the rafting companies provide transportation to the start or the end of the cruise. The cruises usually take from one to one and a half hours, depending on the water's level, but there might be cases when the time doubles or even triples.

"One day the water was so low that we were stranded at the last ford. Me and the other raftsman jumped into the water and tried to push the raft. But it didn't move. So, we asked all the men aboard to help us, and when that didn't work either, they first carried the women onto the bank and then transferred the raft over the ford to deeper water," the rafter Maťo recalls the time when the cruise took four hours.

"You can imagine, how the women were excited. They wanted to repeat it!"

Rafting occurs in the summer on the following rivers:
Váh - (see 'One day around the castle', page 6, for more information).
Dunajec - an 11-kilometre long ride through the Pieniny national park. The main port is in the town of Červený Kláštor; another one is some three kilometres up the river in the village of Majere. The cruises end in the village of Lesnica. Running daily 8:00-18:00.
Orava - a two-hour long ride starts at the port in the village of Nižná and ends in Podbiel. Running daily 10:00-16:00. www.orava.host.sk/plte/
web.php
The prices of the tickets range between Sk100 and Sk250 for adults and children.