The castle built by fairies

THE MASSIVE fortress built in a rectangular shape, Červený Kameň Castle, sits above the village Častá hidden in the woods of the Malé Karpaty mountain range that spreads across southwest Slovakia. The well-preserved castle is a unique construction in central Europe, built according to the examples of the Italian fortresses from the 15th century. Only the castle Unnot in Schauffhausen, Switzerland, has been built a similar way.
The castle was named Červený Kameň (Red Rock) after a nearby reddish rock. As the following legend has it, the castle should originally have stood there. 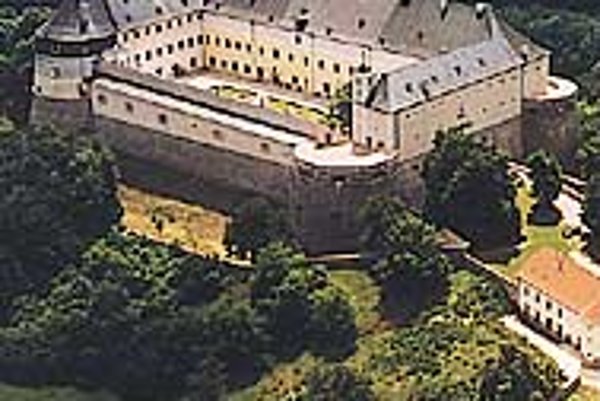 Font size:A-|A+
THE MASSIVE fortress built in a rectangular shape, Červený Kameň Castle, sits above the village Častá hidden in the woods of the Malé Karpaty mountain range that spreads across southwest Slovakia. The well-preserved castle is a unique construction in central Europe, built according to the examples of the Italian fortresses from the 15th century. Only the castle Unnot in Schauffhausen, Switzerland, has been built a similar way.

The castle was named Červený Kameň (Red Rock) after a nearby reddish rock. As the following legend has it, the castle should originally have stood there.

Before erecting the castle, the cleverest local elders got together to decide on its location. All but one wanted to built it on the red rock. The youngest one objected by saying that the rocky hill was the place of devilish ghosts and fairies, and therefore they should not disturb them. However, the older ones mocked him, telling him he was too old to believe in fairy tales, and ordered that the castle be built on the rock.

During the night, the fairies woke up and transferred the laid stones to a neighbouring hill. The next morning, the surprised builders ran to the elders, telling them what had happened. The elders then gave in, agreeing with the youngest one, and ordered that the fortress be built on that hill.

The stone castle, built in the 13th century, was part of the defensive system that spread along the then western Hungarian border from Bratislava to Žilina.

Among the many owners of the castle was also the significant Lord of Trenčín Castle, Maté Csák (Matúš Čák Trenčiansky), and the rich families of Thurza and Fuggers. At the end of the 15th century, the Fuggers together with Thurzas founded the world's largest copper-mining company - the Thurzo-Fugger Company - that operated from American to Slovak mining towns, and is said to be the predecessor of today's multinationals. Fuggers acquired the castle from the Thurzas in 1535, and reconstructed its medieval design into a fortification with vast underground storage capacities for the extracted copper.

At the end of the 16th century, Miklós II Pálffy aquired part of the castle by marrying Mária Magdaléna Fugger. The Pálffys remained its owners until 1945. The last owner of the castle was painter Peter Pálffy, a contemporary and follower of Picasso, who died in Vienna in 1987.

Four years after the second world war ended, the castle was confiscated by the state. Closed to the public for many years, the castle's expositions were finally opened in 1992.

Today, a guided tour leads visitors through the castle's rooms decorated in the styles of different periods. The tour also includes the expositions of historical weapons and portraits of the castle's owners, as well as an exploration of the underground cellars.

The castle's large courtyard offers a rich programme during the summer season, such as festivals of historical fencing and music, with permanent shows by the local falconry group. There are also horse and pony-rides for children on the grounds in front of the castle. The castle's reception rooms, as well as the large cellars can be rented for weddings, receptions and banquets for up to 800 people.

Take a guided tour through Červený Kameň Castle (see the information under the top picture for exact instructions). While you are still on the castle grounds, go and see the falconry demonstration that takes place just beyond the first gate to the castle. The yard features the largest collection of birds of prey in Slovakia.

Take a short blue trail from the castle through the Malé Karpaty forest down to Zochova chata (a pension and restaurant) leading around Vyvieračka, a cave formation. If you came to visit the castle by car, return to the parking lot at the castle, and drive to Pezinok (in the direction of Bratislava). You can also take a bus from the Zochova chata bus stop to Pezinok.

While in Pezinok, you can either play tennis or continue down the road to Senec to relax at the Slnečné jazerá (Sunny Lakes) recreation area.

Senec: Slnečné jazerá (in southern part of the town). The lake offers opportunities for sports enthusiasts, such as swimming, water slides and water skiing.

Galéria insitného umenia - Schaubmarov mlyn (Gallery of Naive Art) - Schaubmar Treadmill) The baroque treadmill was built by Pálffy's family in the 18th century. The historical building houses a permanent exhibition of around a hundred paintings and sculptures by local and international amateur artists.

The late-Baroque basilica, built in the second part of the 18th century, is a famous pilgrimage destination in the country. Pope John Paul II visited it in 1995. Pope Paul VI sanctified it "basilica minor" in 1964. It has the biggest organ in Slovakia and its spacious interior is decorated with lots of frescos on its walls.

Červený Kameň Castle is located within the Malé Karpaty (Small Carpathians) mountain range in western Slovakia. There is a 90-metre long ridge that you can walk along and the highest peak is Záruby (768 metres). They hide a large number of castle ruins amongst the mostly beech forest, and offer many hiking as well as mountain biking possibilities.

Mountain-bike tour Modra - Kuchyňa A red cycle trail from the town of Modra takes you through Harmónia, which is a part of Modra, to Zochova chata. There, change to the blue trail that leads across the Malé Karpaty to the village of Kuchyňa. The path is 15 kilometres long. To return, take the same trail back, or take a trip to Pezinok. If you choose the latter, cycle down the road to the village of Pernek (4.5 kilometre south from Kuchyňa). From there take a 19-kilometre road leading through the Baba saddle to Pezinok. Modra is some five kilometres north of Pezinok.

Modra - Bratislava (2-day ridge walk) Starting from Modra, take the blue trail up to Veľká Homoľa (687 metres). From there follow the green trail in the direction of the Čermák crossing, where you change for the red trail (Štefánikova magistrála) leading to Pezinská Baba. Spend a night at one of the hotels in the area.

Next morning, continue to following the red trail all the way to Bratislava. The trail ends in the area of the TV tower Kamzík, Koliba.

Note: For these trails it might be useful to consult the map Malé Karpaty-Bratislava No. 127, published by Vojenský kartografický ústav, Harmanec. Hiking maps are available in bookstores and information centres across Slovakia. Modra information centre, Sokolská 8, tel: 033/6472-112.