THE POLITICAL manoeuvring of Pavol Rusko, the head of the New Citizen's Alliance (ANO), has put into doubt the stability of the ruling coalition as well as of his own party, leading to the prospect of unforeseen alliances between government parties and the opposition.
"I think the autumn will fully demonstrate whether Rusko and ANO wish to remain a part of the ruling coalition or not," Prime Minister Mikuláš Dzurinda, the head of the Slovak Democratic and Christian Union (SDKÚ), told journalists at a press conference on August 5. 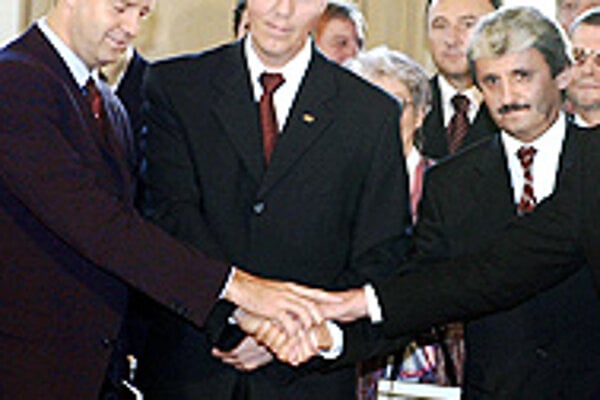 Font size:A-|A+
THE POLITICAL manoeuvring of Pavol Rusko, the head of the New Citizen's Alliance (ANO), has put into doubt the stability of the ruling coalition as well as of his own party, leading to the prospect of unforeseen alliances between government parties and the opposition.

"I think the autumn will fully demonstrate whether Rusko and ANO wish to remain a part of the ruling coalition or not," Prime Minister Mikuláš Dzurinda, the head of the Slovak Democratic and Christian Union (SDKÚ), told journalists at a press conference on August 5.

The parliament is set to debate a number of issues on which coalition partners have clashed in the past, among them legislation on abortions and a treaty with the Vatican. Deputy Prime Minister for European Integration Pál Csáky, heavily criticised for his failure to prepare the country effectively for EU membership, is also likely to undergo a vote of confidence.

Rusko's ANO has in the past voted with the opposition, and against coalition partners, on a number of these points. He has already indicated that he is not likely to change his positions.

A downturn in relations between the parties of the coalition started at the end of last year, when Rusko allegedly pressed Interior Minister Vladimír Palko to appoint an ANO nominee to the position of the chief of the financial police and demanded other positions at the Interior Ministry be given to his party's people. ANO in turn refused to put KDH candidates in positions in the state-run electricity works Slovenské Elektrárne.

Conflicts continued in January, when Rusko received an illegal recording of his conversation with a reporter from the daily SME. Rusko said the Interior Ministry, headed by Palko of the Christian Democratic Movement (KDH), was behind the phone tapping and called for Palko's resignation. An inquiry into the case carried out by military prosecutors later cleared the ministry of wrongdoing.

Rusko and the KDH clashed again over the issue of abortion. In May 2001 the KDH asked the country's Constitutional Court to rule that the law on abortion contradicts the constitutional principle of an individual's right to life. In return, ANO proposed legislation which would maintain the woman's right to decide the fate of her unborn child regardless of the court's ruling.

ANO joined forces with the opposition, and on July 3 the law was passed. However, President Rudolf Schuster vetoed the measure. It is now back in parliament, which is set to deliberate on it again in September.

While being reluctant to take a clear stand on the abortion issue, other parties of the ruling coalition - the Hungarian Coalition Party (SMK) and the SDKÚ - agree with the KDH that it is unacceptable to by-pass coalition partners and join up with the opposition in the way Rusko does.

In March of this year, former media magnate Rusko was accused by failed tycoon František Mojžiš of blackmail, an allegation investigators are presently looking into.

In recent weeks Rusko has in turn accused Mojžiš of conspiring with KDH-controlled investigators to put pressure on him and influence his political decision-making. Rusko says Mojžiš, who himself had been investigated for suspicions of past wrongdoings, gave the KDH Sk10 million (€239,000), which the party used to purchase a new headquarters. The KDH has announced plans to file charges against Rusko for the claims, which it has denied.

In his initial reactions to Dzurinda's statements, Rusko said that his party is not re-considering its place in the coalition.

"We have never mentioned leaving the coalition," Rusko told TV Markíza on August 5 and added that the other parties are pushing ANO out.

Later, he appeared more willing to talk about the possibility of the coalition failing.

"I don't rule out early elections, because even that is a better solution than going through suffering and further worsening of relationships," said Rusko, according to the TASR news agency on August 7.

"Fico invited me for a private dinner. We talked about things we had not discussed for three or four months," said Rusko, according to TASR, and added that he and Fico "definitely did not reach any deals".

Rusko admitted that he and Fico briefly touched on the issue of the vote of confidence regarding Csáky in their discussions.

Coalition partners, who were not informed of the meeting beforehand, were cautious in their reactions. "I hope both gentlemen enjoyed their meals," said Dzurinda.

Dzurinda, for his part, changed his rhetoric towards the opposition Movement for a Democratic Slovakia (HZDS), headed by Vladimír Mečiar. The authoritarian Mečiar, who had been Slovak prime minister from the time Slovakia gained independence in 1993 until 1998, was seen as the main obstacle to Slovakia's integration into EU and NATO.

While in January 2002 Dzurinda described Mečiar as someone who had been involved "in activities that sharply contradict the principles of democracy", now he talks about an improvement in relations with Mečiar's party.

"[In issues of national interest] the opposition has displayed a new quality. You have to be blind not to see that," Dzurinda said. The HZDS voted in favour of Slovakia's entry into both NATO and the EU. The prime minister said he was thankful for the HZDS vote, which indicated that the quality of relations with the party has changed.

The statements have led some experts to conclude that the SDKÚ may be considering forming a minority government supported by the HZDS if ANO leaves the government.

"It is a warning for ANO that [the coalition] will be able to reach an agreement with someone else as well, and it's up to [ANO to decide]," said sociologist Michal Vašečka in an interview with SME.

Another opposition group, whose members show an affinity with ANO, is the People's Union (ĽÚ), made up of former HZDS members. The ĽÚ presently has 11 representatives in parliament.

Ladislav Polka, an MP for the ĽÚ, indicated that he and four of his liberally oriented colleagues are considering joining ANO. None of the other four men has confirmed the statement, described as "a result of the hot weather" by party vice-chair Oľga Keltošová.

Rusko claimed he has not yet held any official talks about political regrouping with members of the ĽÚ, with whom he has so far only discussed support for specific measures put forward by ANO, such as the abortion law.

However, he would not oppose the HZDS renegades joining his party if ANO members approve the move.

For ĽÚ members, joining ANO may be a matter of political survival. According to a survey by the Public Opinion Research Institute of the Statistical Office (ÚVVM) released on July 17, only 0.9 percent of Slovakia's voters support the ĽÚ, far from the 5 percent mark required for getting into parliament. ANO gained 9.5 percent in that poll.

Were the ĽÚ renegades to join ANO today, the party would hold 19 seats in the 150-member assembly. However, there are also reports of mounting tensions within Rusko's own party and that figure may not be final.

"[ANO] is certainly internally divided. There are people who do not agree with the steps the party leadership has taken," said Deputy Transportation Minister Branislav Opaterný, a co-founder of ANO, in an interview with the daily Pravda.

"There is no debate within the party, even about the most elementary political issues. To disagree with the chairman is seen as an attempted coup," Opaterný added. He did not rule out the possibility of leaving the party in the case that ANO supports early elections or works with the present opposition.

Economy Minister Robert Nemcsics, vice-chairman of ANO, has also indicated that he may be considering leaving ANO for Dzurinda's SDKÚ.

"I can neither rule it out nor confirm it. That's the way politics are," he said.

Imrich Béreš, who, before ANO's congress in May, said he would run for party chairmanship if Rusko decided to step down as party boss - a possibility which never materialised - has now announced plans to leave politics altogether.

Béreš, ANO's vice-chairman for international relations, has claimed his thoughts about withdrawing from politics have nothing to do with the situation within ANO.