DESPITE facing numerous obstacles and lagging behind the West, e-learning is becoming a sought-after teaching and training method used by both educational institutions and corporations in Slovakia.
E-learning is a term used to describe the use of information technologies in the educational process. Insiders cite the main advantages of e-learning as low costs, the ability for students to study at their own pace, objective evaluation of study results and the fact that information can easily be updated. 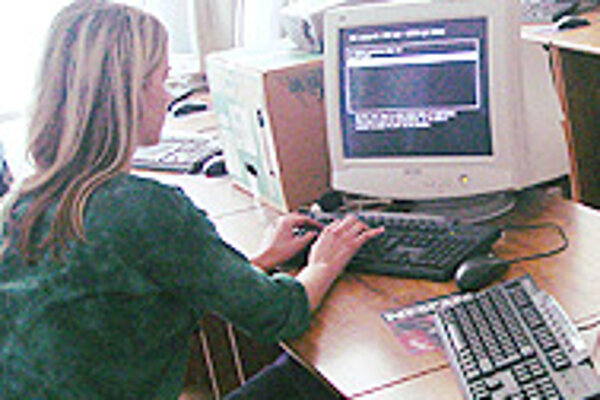 Font size:A-|A+
DESPITE facing numerous obstacles and lagging behind the West, e-learning is becoming a sought-after teaching and training method used by both educational institutions and corporations in Slovakia.

E-learning is a term used to describe the use of information technologies in the educational process. Insiders cite the main advantages of e-learning as low costs, the ability for students to study at their own pace, objective evaluation of study results and the fact that information can easily be updated.

With its advantages, the method is attracting the attention of an ever-increasing clientele.

"The e-learning market is growing steadily, both world-wide, and in the Czech and Slovak Republics," said Jan Pejša, director of Kontis, a major Czech provider of e-learning products that also provides its services in Slovakia.

Among the top users of e-learning are companies that use it for employee training.

"Global research shows that this year e-learning will make up 40 percent of all corporate training. In the Czech Republic and Slovakia we are not reaching those numbers yet, but on the other hand, the market growth is faster," he added.

However, the wide range of e-learning products makes it difficult to precisely define the user group.

"The interest in this new, modern form of education is surprisingly high in Slovakia," said Andrej Kluka, a project manager at Lomtec.com, a company providing e-learning solutions in Slovakia.

"We organised a seminar on the issue in April that was attended by over 90 representatives from various fields, such as financial institutions, universities, the public administration, and educational organisations," Kluka added.

"We have a large number of courses and have divided them into different categories. Based on that division, it's easy to determine the target group of a particular course. Some of the examples of the various categories would be basic computer courses, professional IT courses, business, personal development or language courses," said Kluka.

However, it is not only ready-to-use courses clients are after.

"In the Czech and Slovak Republics, the ratio is even more in favour of internally developed courses, because due to the small size of both markets, there are a considerably lower number of prepared courses in the local languages that can be bought and directly implemented," he added.

Some companies therefore offer systems that enable corporate clients to effectively develop and manage courses on their own, or prepare them based on the clients' requests.

Slovak educational institutions are also becoming active in the field. Among them is the Centre for Advanced Studies at the University of Economics in Bratislava (CDV).

"We currently offer three modules as part of our e-learning program: management, marketing and corporate finance," said Ivan Záleský of the CDV, who stressed that CDV has so far only completed the pilot phase of the project.

"They are [meant for] university graduates, but we recently held talks with a company that was interested in management courses for its managers in higher positions," said Záleský.

Despite some initial successes, several obstacles still stand in the way of Slovakia getting on an equal level with Western countries in the field of e-learning.

"On one hand it is the high costs connected with the introduction of new technology, although the subsequent operational costs are minimal and the return on investment, when compared with traditional forms of studies, is extremely short," said Kluka.

"The second problem is, from my perspective, a certain fear of new technology," he said.

However, while aware of the problems, experts remain optimistic about the fate of e-learning in Slovakia.

"There are no major obstacles and the e-learning market in Slovakia bares the same traits as any Central European market we enter," said Pejša.

"Technical problems can be overcome. That is documented by the successful and extensive introduction of e-learning in the Czech Railways, which at the beginning was troubled by several problems, such as a small number of computers, low computer literacy, and average high age [of participants]," he said.

"What is more important is that people - both managers and employees - need to change the way they think. It is interesting that even though e-learning is a huge trend now, research shows that over 70 percent of e-learning implementations fail or do not bring the expected results. The problem is not in e-learning; it's in the companies that implement it," Pejša added.

Experts admit that despite good prospects, the Slovak e-learning market still has a long way ahead of it.

"E-learning has become somewhat of a hit, so you will find a number of companies claiming to offer it in Slovakia. However, there are really only a very limited number of companies which have actually implemented e-learning and have experience with large projects," said Pejša.

"This field is still at the very start of its development. Not too long ago e-learning was a completely unknown term and hardly anyone knew what it was. There are still too few companies that focus on e-learning, but the situation is changing for the better," said Kluka.