Learning the language of peace

NATO enlargement next year will mean that an increased number of officers and administrative staff in accession countries, including Slovakia, will need to be able to communicate in English. The British Council is managing a series of projects to support English-language training for the military in these countries, on behalf of the United Kingdom Foreign and Commonwealth Office and Ministry of Defence (MoD). 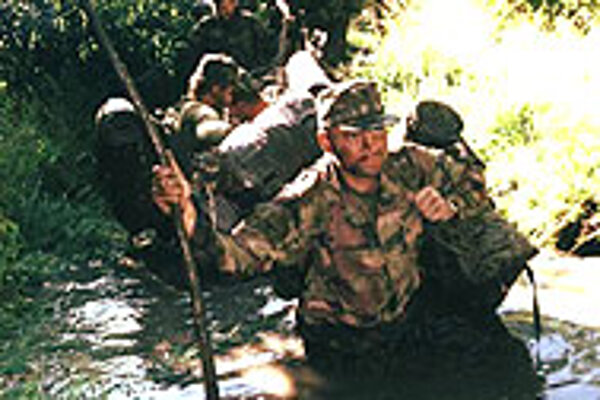 Font size:A-|A+
NATO enlargement next year will mean that an increased number of officers and administrative staff in accession countries, including Slovakia, will need to be able to communicate in English. The British Council is managing a series of projects to support English-language training for the military in these countries, on behalf of the United Kingdom Foreign and Commonwealth Office and Ministry of Defence (MoD).

Although Slovakia's own Peacekeeping English Project (PEP) started in 1999, later than in neighbouring countries, it has made significant progress. The Slovak Spectator spoke to Gavin Floater, the PEP Manager in Slovakia.

The Slovak Spectator (TSS): Could you provide some background to the Peacekeeping English Project in general and the Slovak project in particular?

Gavin Floater (GF): PEP covers 24 countries. Generally, different countries set up at different times, so countries like Hungary and Poland have projects dating back to the mid-1990s. Whereas Slovakia's dates back to 1999. There are other countries that we are just setting up, like Tajikistan. They haven't all started at the same time and they're not all at the same level of maturity.

The project's aim is to support ministries of defence and ministries of the interior with their English-language teaching programmes, and in some cases to prepare them for the linguistic demands of NATO membership - particularly in this part of the world, and in other countries like Tajikistan and Kazakhstan.

TSS: How long is the project expected to last?

GF: The funding is for one year at a time, so we've basically got funding until the end of March 2004, but we've certainly got enough work to do until Slovakia becomes a full member of NATO. So there's probably another year beyond that, but we don't really have an end date yet.

TSS: Is the project likely to continue after the funding finishes from the British side? Will the Slovaks take over?

GF: Well, the Slovaks are involved as key partners anyway. One area in which the project might evolve is in areas such as justice and home affairs. PEP in Slovakia just focuses on the military. PEP in other countries involves people like the police, customs officials, and drug enforcement agencies, which we haven't touched on in Slovakia, so there might be some potential there later on.

TSS: What's the involvement of the Slovak state in the project so far?

TSS: What are the levels of English that NATO requires Slovakia to reach? Are they part of the conditions for its entry to the organisation?

GF: When Slovakia becomes a fully-fledged member it will need to contribute to peacekeeping missions - and English is the language of NATO. A certain number of people who are able to work at some level of interoperability will be required - in other words, people who can go off and work in international settings and communicate in English without being a liability.

As far as I'm aware, NATO hasn't set a particular figure. It seems to be that there should be a sufficient number available.

It's not only people who go off on international missions. Obviously, when Slovakia joins NATO, there needs to be a Slovak presence at NATO headquarters and a number of people working at an administrative level able to communicate in English about military matters.

TSS: How many students are involved across the country?

GF: Basically, in Slovakia there are the two main military academies in Liptovský Mikuláš, where English is part of the curriculum for the five-year students, as it would be at any other university. Students there at particular stages of their studies would have English. It would involve several hundred probably.

Also, in the late 1990s, with NATO in mind, the Ministry of Defence established six work centres in different towns - in Nitra, Topoľčany, Prešov, Trenčín, Zvolen, and Martin. There, students are doing more intensive courses, which are intended to train them up to particular NATO levels. That's been going on since the late 1990s, so several thousand will have received at least some kind of English training.

TSS: You mentioned certain levels of English. Are those set by NATO and if so, how are they tested?

GF: NATO has Standardisation Agreements (STANAGs) for different aspects of the military, and the STANAG for language training is called STANAG 6001. It basically has descriptors for speaking, listening, reading, and writing from the lowest zero level through to level five, which is the highest, native-speaker level. At each level there is a certain descriptor that the students should reach. The descriptors are open to considerable interpretation.

STANAG itself is not an examination and in Bratislava, for example, there is a team of people who write tests according to the descriptors. At the moment we actually have something called a multilevel test, consisting of items which cover very easy through to very difficult items, and somebody completing it will get a grade that correlates with STANAG level zero to four.

TSS: Do your teachers find it different to teach military personnel rather than ordinary students?

GF: Many of the differences are those between teaching kids and teaching adults. Teachers' perceptions of what they need to know is very different: often they think they need to know more about the military than they really do. Teachers often think that they need to teach military topics whereas, in fact, they don't because the military students are often already familiar with those. Instead they need skills to communicate effectively. That often takes some transitional time before they realise they don't need to be experts in military areas in order to be effective ESP (English for Special Purposes) teachers.

TSS: The Peacekeeping English Project has a mission statement that states that it is aimed "at enhancing political and military stability through improving English language communication". Is that something that you have in the front of your mind when you are preparing teachers for the project?

GF: All I want to see are teachers who teach well, irrespective of teaching the military or anyone else, and more importantly, teachers who can motivate learners to learn.

Beyond that it is difficult for me to see whether the contribution does lead to the kind of cooperation we are talking about. I assume it does - if learners are learning well that means they're becoming more tolerant, I imagine. It certainly means that they're becoming more independent, and once they get into an international setting with other military personnel one hopes that rubs off. Even the teachers don't really see that - once the students have gone, it's often difficult to keep track of how effective their language training has been.

TSS: There was an evaluation of the Peacekeeping English Project carried out in 2001. How did Slovakia do in comparison with other countries?

GF: I think it is more useful to compare today's Slovakia with the Slovakia of ten years ago - in other words, the way that the country has evolved in its own terms, rather than how it compares with the Czech Republic, for example. Certainly the Slovak system on paper is a good one. It's a nationwide system of English-language training.

We have a very tightly knit group of teachers. They are not 60 individuals working in their own offices who don't communicate with each other; they are 60 people who believe in a culture of sharing lesson plans and ELT (English Language Teaching) matters.

The teachers and testers have had unparalleled opportunities to develop their knowledge. We have three individuals at Lancaster University [in the UK] in tester training. We have a comprehensive system of summer schools. We've run three teaching schools in Slovakia, and people from other countries have been involved in the project.

Those are things that the project has initiated, supported, and would be missed if the project didn't exist; but most of all, we support the Slovak system. We're not here to impose a British system. The Slovak system might not be perfect but it's a system that we're here to support and develop.