Land of a thousand caves

AFTER slithering through the same narrow crawlspaces, descending into deep holes, and climbing huge rock piles for almost 15 years, spelunkers from the Speleo Detva group have finally managed to connect two deep caves in the Low Tatras via a man made tunnel. On July 26, shortly after lunchtime they broke through the rock separating Večná robota (Eternal Work) cave and the Starý hrad (Old Castle) cave.
"This is the newest significant success of Slovak spelunkers. 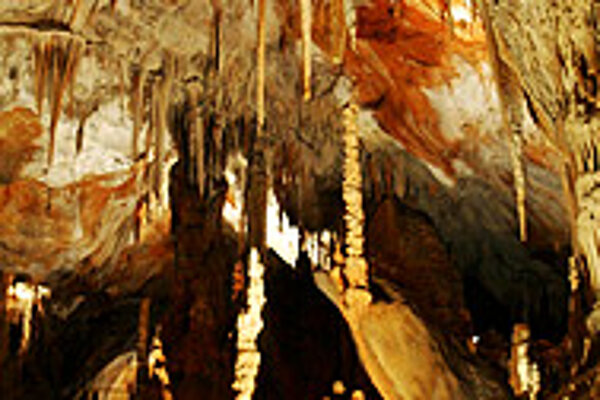 Font size:A-|A+
AFTER slithering through the same narrow crawlspaces, descending into deep holes, and climbing huge rock piles for almost 15 years, spelunkers from the Speleo Detva group have finally managed to connect two deep caves in the Low Tatras via a man made tunnel. On July 26, shortly after lunchtime they broke through the rock separating Večná robota (Eternal Work) cave and the Starý hrad (Old Castle) cave.

"This is the newest significant success of Slovak spelunkers. By interconnecting the two caves, or abysses, they created the deepest cave system (494 metres) in Slovakia," says Bohuslav Kortman, the chairman of the Slovak Speleological Society (SSS) and co-author of several publications about caves.

The system was named Hipman Caves after the cave explorer Peter Hipman who worked extensively in the area. Hipman recently died and now his wife leads the group of spelunkers who continue his work. According to Kortman, the system has the capacity to go even deeper underground, and be interconnected with other caves in the Krakova Hoľa mountains.

The SSS originated in 1949 as the first independent organisation of volunteer and professional spelunkers. It currently operates as a civic association, with around 800 members and 45 spelunking clubs. Their aim is to discover, explore, document and protect caves and other cave formations here and abroad, and to share what they find with the public.

Up to now, there have been around 4,500 caves discovered in Slovakia, most of them in hilly, hardly-accessible, limestone areas. During the last ten years Slovak spelunkers have discovered more than 80 kilometres of unknown corridors and surveyed up to 100 kilometres of cave space.

According to SSS's webmaster, Eduard Kladiva, who is himself a cave explorer in Slovenský kras, so many new discoveries are being made that he doesn't have time to add them all to the website.

The association meets several times a year, including at their annual conference held every April, when members present and discuss new achievements they have made in the field.

"Slovak caves are not the largest in the world, but they are unique for their density," Kladiva says, adding that the highest number, nearly 1,000 of them, are in Slovenský kras.

The largest cave system in Slovakia is the 33-kilometre long Demänovský in the Low Tatras, part of which is open to public. The deepest cave is the newly discovered Hipman Caves, also found in the Low Tatras.

Out of the 4,500 caves (a cave is defined as an underground cavern at least three metres long or five metres deep) 12 are classified as publicly open caves. It means that they have the "classical access": Visitors can comfortably observe the cave's ornamentation while walking along solid paths that are electrically illuminated.

These caves are part of official natural reserves and are supervised by the Slovak Caves Administration. Most of them have also been included on the UNESCO World's Heritage List. Among the popular ones are the Demänovská jaskyňa slobody (Demänovská Cave of Liberty), Dobšinská ľadová jaskyňa (Dobšinská Ice Cave) and Ochtinská aragonitová jaskyňa (Ochtinská Aragonite Cave).

Apart from these state run caves, there are also caves run by private individuals. Before entering them, one is adviced to don special spelunker's coveralls and carry a carbide lamp. Once dressed and equipped visitors can crawl and climb around just as the cave's original discoverers did. There are three such caves, but only two are currently open: the Jaskyňa mŕtvych netopierov (The Cave of the Dead Bats), and Zlá Diera (see article this page).

"Thanks to the manifold nature of Slovakia, there are several types of caves. At the core are the karst caves in the limestone areas, but then there are travertine ones, caves in conglomerate sediment, sea caves and even lava caves," says Kladiva.

"Even though, there are more beautiful and bigger caves in western Europe, it is the ornate formations in our caves that lure foreign spelunkers to come here," he says.

Slovak cave explorers also successfully participate in cave expeditions abroad. According to Kortman, in the 1970s and 1980s they were among the world's best speleo-alpinists, as they descended into several of the deepest caves in the world, like Gouffre Jean Bernard (-1,298 metres), and Gouffre Berger (-1,141 metres) in France or Soa G.E.S.M. (-1,077 metres) in Spain.

"Recently, we discovered and explored two caves in the Croatian mountain of Velebit - Lukina jama [Luki Cave] and Slovačka jama [Slovak Cave], which are currently among the 20 deepest caves in the world. Our spelunkers also explored the world's deepest vertical cave, Medúza [Medusa] (-450 metres) in Croatia," says Kortman, who in his 50s is an active cave explorer himself.

As the leader of the Strážovské Vrchy spelunker' club, based in the northwest town of Považská Bystrica, he has discovered several caves in the region. His favourite one is the cave called Četníkova svadba (Četník's Wedding - in old Czech "četník" was a policeman).

"We discovered the cave when one of our club's members, nicknamed Četník, was getting married. Because we didn't have any present prepared for him, we decided to name that cave after him," Kortman explains how the strange name of the cave originated.

"Caves usually receive names after the localities they are situated in, or something that characterises them, such as the kind of a mineral present there, or after the name of the discoverer. But sometimes they receive names that are hardly publishable, like Ox's Arse," he says.