COALITION partners have managed to reach
agreement despite what has been perceived as a major coalition crisis marked by one of the four partners, the
New Citizen's Alliance (ANO), standing against the remaining three ruling parties.
After a six-week summer break, the coalition council meeting between members of the ruling parties took place
on August 19 with Prime Minister Mikuláš Dzurinda announcing that "all four partners agreed that during the
remaining election term we want to abide by the rules of the coalition agreement". 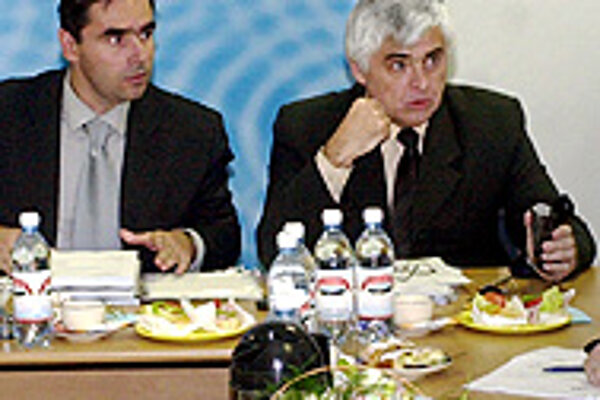 photo: TASR
COALITION partners have managed to reach agreement despite what has

been perceived as a major coalition crisis marked by one of the four partners, the New Citizen's Alliance (ANO),

After a six-week summer break, the coalition council meeting between members of the ruling parties took place

remaining election term we want to abide by the rules of the coalition agreement".

The agreement stipulates the rules of coalition cooperation and states, among other clauses, that no ruling partner

should join with the parliamentary opposition to push through laws against the will of the rest of the coalition.

A couple of hours before the crucial coalition meeting, representatives from three of the four parties sharing

a Democratic Slovakia (HZDS). The fourth coalition member, ANO, did not attend the meeting.

Before meeting with Tkáč, Dzurinda had even warned ANO boss Pavol Rusko that he would not feel any

obligations to the party if it continued to break the coalition agreement by voting with the opposition. Rusko

proposed by ANO. President Rudolf Schuster vetoed the law in July, and a repeated vote on the legislation will

be held in September.

legislation, which would mean joining with the opposition. The co-ruling Christian Democrats, who oppose the

law, said earlier this year that if the legislation takes effect, it would appeal to the prime minister to recall all

Dzurinda hinted that a possible solution to the dispute was on the way.

in case of serious genetic damages in the foetus, currently only allowed on the basis of a health ministry's

directive, into the proper abortions law.

The guideline, as well as some aspects of the law itself, are currently being studied by the Constitutional Court,

which is expected to reach a verdict in September. ANO said their amendment was meant to prevent abortions

on genetic grounds from being banned by the court.

According to Dzurinda, it is possible that the ruling partners will jointly agree to wait for the Constitutional

Court verdict before the second vote on the ANO-proposed legislation.

caucus, told The Slovak Spectator shortly before the coalition council meeting that his party continues to insist

that there is "no reason to change our [ANO's] attitude in the case of the abortion law".

Grigorij Mesežnikov, head of the Institute for Public Affairs think tank in Bratislava, was also cautious over the

the coalition problems are gone for good," he said on August 21.

ANO, in addition to the outstanding problems in their relations with coalition partners, mainly an apparent

breakdown in communication with the KDH, has yet to solve another internal party problem.

Following an August 17 informal goulash party, several ANO MPs and officials suggested that two of the

Opaterný, should consider leaving their posts over their recent critical remarks regarding the situation inside

Both officials criticised the leadership of the party and blamed Rusko for using ANO as a vehicle of his interests.

Opaterný went as far as to compare ANO leader Pavol Rusko to Stalin.

Both officials refused to deny speculations that, if ousted from ANO, they would consider entering Dzurinda's

the party, a number of analysts agreed that the recent developments in the party were not positive. "Something is

when a meeting of the ANO board is to take place.

When asked whether ANO had already agreed on who would replace Nemcsics and Opaterný, Lintner said that

that the question was premature.

Even if the officials were replaced, Mesežnikov said it would "not endanger the coalition because neither of the

two is considering joining the opposition".

"That means that the number of coalition MPs (in parliament) would, in essence, remain unchanged," he said.

who were putting the liberals under pressure, including the official meeting of leaders of the three other coalition

partners with Vojtech Tkáč shortly before the coalition council meeting.

"Were we supposed to take this as a signal that that could be the new coalition council," Lintner said.

Dzurinda's statement following the coalition council, however, at least partly calmed the fears that the right-

Mesežnikov said: "I think the partners once again realised that what they have in common far outweighs the

issues that they don't agree on. And besides, existing options for a minority cabinet or early elections would

cause problems for all involved."