WITH MIXED statements from the
parliamentary Communist Party (KSS), Slovakia is marking the 35th anniversary of the invasion of former
Czechoslovakia by Warsaw Pact troops in order to crush the democratic reforms that were taking place in the
Soviet satellite state.
In an unexpected move, KSS chairman Jozef Ševc declared a few days before the anniversary that he and his
party wanted to "apologise to all who suffered any wrongdoings" during that period. Ševc also said that he
would support legislation aiming to reimburse those victims. 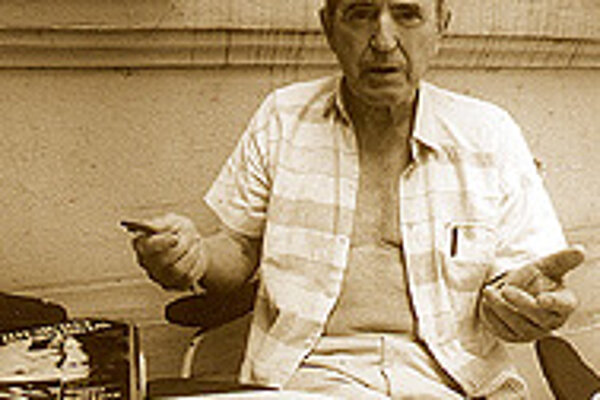 WITH MIXED statements from the parliamentary Communist Party (KSS), Slovakia is marking

democratic reforms that were taking place in the Soviet satellite state.

In an unexpected move, KSS chairman Jozef Ševc declared a few days before the anniversary that he and his

party wanted to "apologise to all who suffered any wrongdoings" during that period. Ševc also said that he

would support legislation aiming to reimburse those victims.

He added, however, that the incident had been a result of the "failure of the [then] Communist leaders" including

the celebrated figure of the reform movement and head of the Communist Party Alexander Dubček.

Ševc, however, continued to defend the entry of the Warsaw Pact troops, stating that he did "not condemn it just

like the Americans don't condemn the invasion of Iraq", an opinion that was shared by his party colleagues as

On the night of August 20 to 21 in 1968, Warsaw Pact troops from the former Soviet Union, Poland, Bulgaria,

the German Democratic Republic, and Hungary entered their ally Czechoslovakia with tanks to crush the pro-

democratic developments that had culminated in the Prague Spring of 1968.

That night, Czechoslovakia became a country occupied by an estimated half a million so-called 'brotherly'

troops, who came with nearly 800 fighter planes, 6,300 tanks, and about 2,000 howitzers. Historians estimate

that about 130,000 people left Czechoslovakia in the first year after the Warsaw Pact troops entered the state

Ladislav Jača, KSS central secretary, told The Slovak Spectator on August 18 that the invasion was justified, as

the troops acted in line with the provisions of the Warsaw Pact.

"The pact's signatory countries, which included Czechoslovakia, pledged to help each other in case one of them

showed signs that the state establishment was under threat," Jača said.

According to Jača, the KSS had "in fact nothing to apologise for" because the post-communist KSS had little in

common with the former communists.

"The [new] KSS was founded in 1992, and we have nothing in common with the invasion and the wrongdoings

of the regime, and when thousands were persecuted over their opposition to the totalitarian regime, was a "very

difficult period in Czechoslovak history that should be left to historians, not politicians, for comment and

apology, they also doubted the sincerity of Ševc's words, and some also noted that it had been symbolic and

paradoxical at the same time that the words came from Ševc himself.

The KSS chairman is a son-in-law of Vasil Biľak, now 86 years old, a former top communist functionary who is

under investigation for allegedly committing treason in relation with the 1968 invasion.

Victims of the regime were puzzled over the apology.

Noskovič, deputy chairman of the Confederation of Slovak Political Prisoners.

"I don't know, however, what to think about the apology because Ševc only seems to have apologised for one

event, but has never said sorry for the political processes [against people whom the regime then perceived as

massive problems to all people living under the regime," Noskovič said.

According to Jača, however, the fall of communism in 1989 brought economic misery to many people and

Noskovič said that some people felt nostalgic for the communist era, but that it was only because of the social

security provided then with cheap food and unemployment illegal for most.

"Communists gave us a litre of milk for two crowns, but what was the true price for all that? The world has

thankfully changed now, and I hope that the return of communism is no longer a threat," Noskovič said.