THE CONSTRUCTION of Slovakia's first wind farm,
jointly funded by the EU PHARE fund and the state, is under way in the village of Cerová in western Slovakia,
80km north of Bratislava.
Four 78-metre-high wind turbines with 44-metre blades are expected to produce a total of 3.6MWh annually -
enough electricity not only for Cerová but also surrounding settlements. The area has some of the strongest
winds in the country, with average wind speed of 5.8 metres per second. 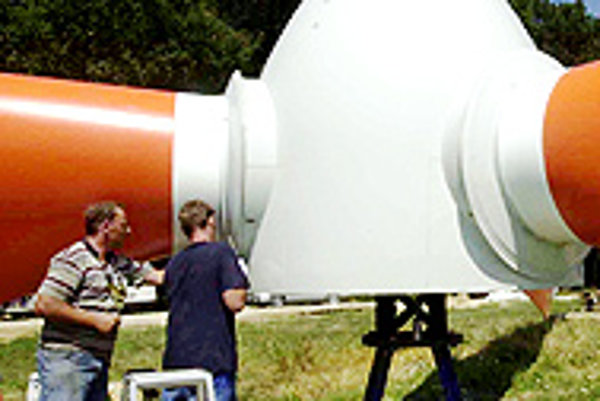 PHARE fund and the state, is under way in the village of Cerová in western Slovakia, 80km north of Bratislava.

Four 78-metre-high wind turbines with 44-metre blades are expected to produce a total of 3.6MWh annually -

enough electricity not only for Cerová but also surrounding settlements. The area has some of the strongest

winds in the country, with average wind speed of 5.8 metres per second.

Before construction could begin, the temporary roads had to be built without sharp bends to allow the transport

of the parts of each turbine. They are composed of three parts, the heaviest of which weighs almost 30 tonnes.

When finished, the whole wind farm will be managed by just one member of staff.The project is being partially

funded by the European PHARE fund to the tune of €1.8 million with an additional €525,000 from state funds.

investment over the course of its anticipated 25-year lifetime.

The farm will be built by Aufwind Schmack, a Bavarian company, which was founded in 1995, that has since

completed more than 15 wind farms with over 40 turbines across Germany. This project is based on one in

Zurndorf, Austria, which was established in 1997 and has 10 wind turbines providing electricity for 4,000

households. The site has also become a local tourist attraction.

The Cerová wind farm is just one of several projects at various stages of development in Slovakia. Another plan

that the country only has 191 km2 where wind speeds are sufficient for electricity production.

consider the construction of larger wind turbines, like the ones at Cerová, for which wind speeds need to be

measured at higher altitudes of up to 50 metres.

Lacko stressed that the location of the wind farms was an important factor. The company has already found

many likely sites around Slovakia.

"We've been evaluating sites since 2000. We've already found dozens of suitable locations. If we are sure that

the potential site has an average wind speed of more than 5 metres per second, we start to investigate the

ownership rights to the land where the [wind farm] could be," he said.

One of the barriers to more "green" energy production in Slovakia is the maximum price of electricity of Sk1.45

although the price is falling.

the larger turbines, such as those that are being used in the Cerová project.

According to the European Union's ALTAS project, which gathers information on alternative technologies, the

wind energy is still more expensive than conventional forms of electricity, meaning that projects have to rely on

support from the public sector.

The project also suggests that the large turbines produce a considerable amount of noise pollution. However, it

admits that as more projects are developed new insights and know-how will allow designers to produce smaller,

more efficient turbines that would allow wind farms to be quieter, and so sited closer to populated areas.

misconceptions about wind power. The association states that wind farms 300 metres away generate about the

same noise level as "leaves rustling in a gentle breeze" at a distance of 100 metres. In Slovakia, wind farms have

to be more than 500 metres away from residential areas.

Experts believe that the current problems with wind electricity generation will be solved in the near future,

allowing for its more widespread use.

the state of wind power schemes in Europe. The report suggests that wind power could account for up to 12

percent of the EU's energy needs by 2020. Even Energy Centre Bratislava's lower estimates suggest that in the

future, wind power could account for up to 2 percent of Slovakia's total energy needs.

electricity production from this is equivalent to burning 20 million tonnes of coal in a conventional power plant,"

EWEA chief executive Corin Millais adds: "Europe is not rich in oil, coal or gas, but we have huge wind

resources, and European companies are world leaders at converting it into energy. Wind power technology is the

'Microsoft of Europe' waiting to be unlocked."