ONE of the oldest castles in Slovakia, Devín, sits on a huge rock overlooking where the Morava river meets the
Danube. The name Devín probably derives from Dowina, which in Old Slavic meant girl.
The rocky hill on which the castle stands was first settled around 5000BC. Celts lived in the area between the
2nd and 1st centuries BC. In the early centuries AD, Romans built a small settlement there, part of the Limes
Romanus fortified system that created the border of the Roman Empire north of the Danube. 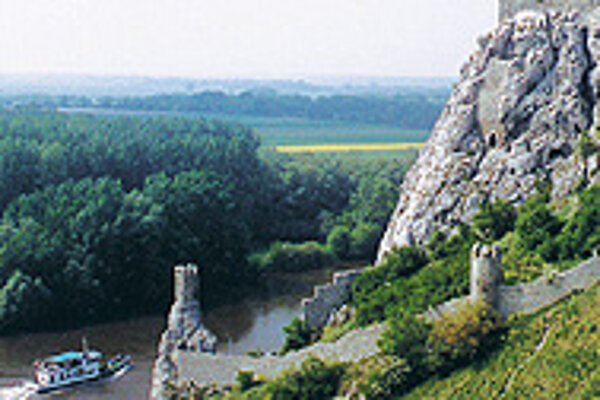 ONE of the oldest castles in Slovakia, Devín, sits on a huge rock overlooking where the Morava river meets the

The rocky hill on which the castle stands was first settled around 5000BC. Celts lived in the area between the

2nd and 1st centuries BC. In the early centuries AD, Romans built a small settlement there, part of the Limes

Romanus fortified system that created the border of the Roman Empire north of the Danube.

The castle was enlarged significantly in the 9th century, during the Great Moravian Empire, when powerful Slav

princes Mojmír, Rastislav and Svätopluk ruled from there. Slovak history marks that era as the birth of Slovak

In the 10th century, the territory of the town of Devín became part of the Hungarian state. The Hungarian kings

and strong feudal dynasties turned the castle into a stone fortification at the turn of the 12th and 13th centuries.

Some two centuries later, extensive reconstruction gave it the appearance of a robust gothic castle.

One of the castle's legends, originating in the feudal period, has it that the lady of the castle had beautiful twin

girls. On her deathbed, she gave each of them an apple, saying that the apples represented their lives. After their

mother's death the sisters exchanged the apples, so that each was responsible for the life of the other.

The sisters lived in harmony until the day when a handsome hunter came to the castle. He fell in love with the

beautiful lady of the castle, not knowing that there were actually two of them - and that he was dating both twins.

The twins did not know that they had fallen for the same man either.

Then one evening, the three of them met by accident and discovered the truth. One of the sisters, in a furious

rage, smashed the apple protecting the life of the other sister on the ground. By doing that, she killed her twin.

A beautiful apple tree grew on the spot where the apple fell. The jealous sister turned into a black goat, which,

according to locals, can still be seen jumping on the castle rock today.

Devín Castle was destroyed by Napoleon's army in 1809 and left to deteriorate. Despite that, it played a major

role during the Slovak Revival in the first half of the 19th century. The castle was the meeting place for a young

group led by Ľudovít Štúr, the Slovak revolutionary and codifier of the literary Slovak language. During that

time, they built an amphitheatre within its grounds, where Slovak nationalists celebrated Slavic history. The

place was the first to hold performances of Czech and Slovak operas.

Since the 1930s, the castle has been the site of a large archaeological dig. The reconstructed basement at the

centre of the castle holds a permanent exhibition celebrating the natural beauty of the region, and the historical

development of the hill from the Celtic settlement, through Roman times, Great Moravia, and up until Štúr's

Take a 90-minute boat-trip from Bratislava up the Danube river to Devín Castle.

Visit the ruins of Devín Castle. The expositions at the castle feature ancient Celtic and Roman

settlements, the period of the Great Moravian Empire, and the later Slovak national revival.

Take a 4-hour trip around the local area. Start the red trail from the carpark below the castle. Climb up the

Devínska Kobylahill (nature reserve), which offers a view of the castle, the point where the Morava

river joins the Danube. From there, take the green trail to Sandberg (a nature reserve with fossils and

deposits from a sea that covered the area during the Tertiary period). Continue back to the town of Devínska

Nová Ves. From there, take the blue trail back to the castle carpark.

Other activities in the region
Cultural events and attractions

Gospel singers from six European countries, America and Africa will perform at the 8th annual festival that

The Bratislava concert starts at 19:00 on August 29, at Evanjelický kostol (Evangelical Church), Radničné

Construction of the largest gothic building in Bratislava started in the 13th century. It served as the coronation

church for several Austro-Hungarian monarchs, including Maria Theresa. A gold-plated copy of a coronation

St. Martin created by baroque sculptor Georg Raphael Donner, and the Chapel of St. Anna, from where a

staircase leads into underground catacombs, in which famous Church figures are buried. The cathedral sits on

An exhibition of historical clocks, made by Bratislava watchmakers mainly in the 18th and 19th centuries, is

located in a rococo building, one of the best-preserved original buildings under the castle.

Many sport activities are on offer in the countryside around the capital - hiking, cycling, inline skating, and water

sports. A cycling route alongside the Morava river and a hiking trip to Pajštún Castle are described below.

An undemanding, 22-kilometre cycle trail in the direction of Vysoká pri Morave starts from under

It follows the river leading through woods, passing meadows, lakes, as well as remnants from the second world

war and communism. The information boards marking the route describe the fauna and flora you pass.

Drive to Záhorská Bystrica (Bratislava district, bus No 37 from under Nový Most). Take the blue trail from the

town's final bus stop, leading first to the nearby village of Marianka, from where the red trail will take

you through the village of Borinka to Pajštún Castle. Return following the red trail to Borinka.

Note: For these trails it might be useful to consult the map Malé Karpaty - Bratislava No. 127,