Slovakia by foot and pedal: A tough old bones of a country

IT WAS not until the pannier rack at the rear
of the bicycle simply fell off in the middle of a highway in northwestern Slovakia, spilling bags and toiletries
across the asphalt, that I really began to regret leaving Bratislava.
At the time, my wife and I had been climbing a tough hill into the village of Liešťany, near Prievidza, on the first
day of a two-week running and cycling trip across Slovakia. It was a scorching afternoon, July 26, and now we
had to dodge traffic to round up our clothes. Skvelé. 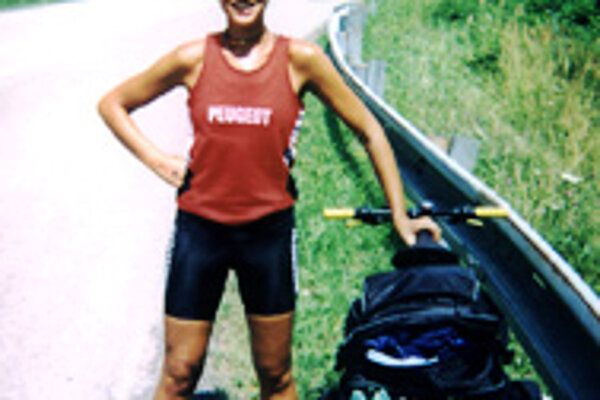 northwestern Slovakia, spilling bags and toiletries across the asphalt, that I really began to regret leaving

At the time, my wife and I had been climbing a tough hill into the village of Liešťany, near Prievidza, on the first

day of a two-week running and cycling trip across Slovakia. It was a scorching afternoon, July 26, and now we

had to dodge traffic to round up our clothes. Skvelé.

I eventually rounded up most of the clothes myself, trying to avoid my wife's heavy, accusing gaze. After all, the

trip had been my idea, and it had been a disaster so far. We had overslept on the morning of our departure

because I had set the alarm clock incorrectly. Then we discovered the front tire on the bicycle was completely

flat, concave even, despite having paid a bicycle repair shop Sk1,000 (€24) the day before to give the bike a

And so it went. At the train station, 20 minutes before our scheduled departure, I discovered I had forgotten our

bankcard. I also discovered that the train did not stop at the destination for which I had bought tickets.

However, at this point I'd prefer to explain what was supposed to happen that hellish morning.

Before moving to Canada this fall, my wife Lucia and I wanted to take a farewell trip around the country, and

because we both cycle and run, I thought we could combine the two - take one bicycle with all our gear, and

while one of us ran the other would bike. The goal was to reach about 50 kilometres a day.

Of course, a running trip requires precise planning. A mistake of even 10 kilometres can be very unpleasant

when you've already run as far as you expected to. Which brings us back to that first day.

We get off the train in Trenčianska Teplá, rather than Ilava as I had intended. The next train is not due for

another two hours, and the morning is already hot. Thinking at lightning speed, I propose we just run the 10km

to Ilava, and then continue to Prievidza as planned. It can't be more than 50km altogether.

Like a good omen, a man with pants belted high above his waist appears to fix our bicycle. Seeing me wheezing

away with the futile hand pump the bike shop boys had sold us, the man opens the trunk of his Škoda 120 and

draws out an ancient iron bellows, which he fixes to the front tire, inflating it with about three depressions of the

Lucia is already in her running gear, I hop on the bike, and we wobble uncertainly down the station road,

keeping an eye on the tire and the bag and anything else that looks like it wants to quit. After several hundred

metres we find ourselves at the main road, and another challenge to our spirits - a road sign saying: Ilava 15.

"Are you going to trust a stupid Slovak road sign, or me?"

One says many foolish things in one's life. Ilava, and the turning for Prievidza, proves to be only 12km, but

Prievidza itself is another 57km, just as the next sign says.

Still, it is good to be on a real journey after so many months in Bratislava, rolling through the broad fields of the

Váh River valley, through the weapons-making haven of Dubnica nad Váhom, more fields and then the 14th

century town of Ilava, with its Renaissance brewery and maximum security jail.

A right turn in the middle of town puts us on Highway 574, which after some narrow bends through a deciduous

forest takes us up to the Homôlka pass (800 meters).

Valaská Belá, the first village past Homôlka, stretches for five kilometres down the road, a 700-year-old

agglomeration of 99 individual communities, most of them related to sheep-rearing. For all of this talk of

Slovaks being short of money, there's some major residential construction going on, although the new wealth

probably has little to do with shepherding.

Such thoughts keep us going for a while, but the heat and the distance - by now it's

shut at noon. The few bus stops have all had their schedules defaced, as if anyone had ever been able to decipher

them in the first place. In the middle of it all, the pannier rack falls off the bike - the bike shop boys neglected to

We arrive at Nitrianske Rudno water reservoir badly out of sorts, and buy drinks from a gas station. Prievidza is

still 16K away, and the next bus doesn't come for over two hours.

At this point a kind of hilarity grips us, and we continue on our way. There is a stiff climb to the village of

Šutovce, and then a deep-woods road to Bojnice Castle, surely one of the most surreal sights after a long day in

The most powerful feeling I have in Prievidza, after the desire for a cold pint, is that our trip needs a rethink.

That I have made a grave mistake, thinking that because I ran around 20km a day in Bratislava, I could do 30 out

here, on top of the biking. That I might be asking too much of Lucia. That this is a tough old bones of a country,

and I was a fool not to take it more seriously.

Turning off E572 at Dererov Mlyn towards Kremnica, we pass through villages that before 1939 were heavily

settled by people of German descent. One has a Soviet tank enshrined on a hill; another has a pair of crossed

rifles as a monument dominating the road, as if warning the Germans not to come back. A former MP, who is

now the custodian of Slovakia's communist secret police files, said recently that many power brokers in

stalls. Lying back in the pews and letting it wash over. Evening, in one of Slovakia's most beautiful towns, I help

Lucia bandage her toes, which look worse than any toes I've ever seen.

Up past Kremnické Bane and the "symbolic centre of Europe", through the village of Turiec, where the houses

seem to be drowning in weeds and neglect.

At Turčianské Teplice we turn in to the Veľká Fatra mountain range, using the highway up to the Horný

Harmanec pass, then the red trail to the Horský Hotel Kráľova Studňa, a big mountain chalet that appears

suddenly after miles of gruelling grades. We walk in the soft evening up to a ridge above the hotel, at a time of

night when the blues and purples are giving way to dark.

The most frightening experience of the trip: We wake to heavy cloud/fog, and breakfast quickly to be off before

the weather changes. We try to consult our planned route with some of the locals who claim to know the

mountains, but get little out of them, beyond some dubious glances at the bicycle.

Less than half an hour after our departure, the rain begins. No spring shower, but an aggressive downpour that

comes at us sideways as we near the top of Krížna (1,574m), the second highest peak in the range. With the mud

and the weather, the bike is tough to even push up the hill, and we take turns. The rain increases, and lightning

flashes around us. As much as the lightning, it is the sound of the storm that scares us, great cracks and barks of

thunder. We get off Krížna as quickly as we can, down a steep descent to what, I believe, is the turnoff to the

There is a sign with a green stripe, and while the map, in the few seconds before it comes apart in my hands, says

there's a green path, the land itself denies it: There is no green path.

At this point we have another major problem. Right at the junction between the red and green paths, some fool of

us, the same type that ripped a man apart in eastern Slovakia the month before. Lucia, who is terrified of dogs,

has absolutely lost it - she's squatting in the rain in the sopping ferns under Krížna, refusing to proceed. I push

the bike back up through the grass to collect her, and coax her past the dogs to a ravine on the far side. Looks

Except, as I said, there is no green path. There's just a tumble of rocks and boulders that follows the watercourse

of this steep, high-mountain valley. I have a 35kg pack on the back of the bike, but I don't dare unstrap it. The

rain is still slashing down, we're getting cold, and we both have a sense of impending disaster that we have yet to

Over an hour later, I leave the bike and scramble down the next run of rocks. Before me is a 20-metre waterfall.

End of the line. With my heart starting to hammer in my chest, I look up at the valley, and see only rain and

steep slopes and distant crags. There's no way we will ever make it back up the way we came with this bike. My

main worry is what I'm going to tell Lucia, and when.

Before I say anything, I scramble several hundred meters up the side of the valley, and find what might once

have been a green path. In 20 minutes, Lucia and I manage to push the bike up the slope, and we move on,

covered in mud and shivering.

It is a terrible journey, one of massive fallen trees and steep gorges, and always that bloody bike and pack to ram

through the obstacles. But the worst are the nettles - they grow above our heads, and the long running clothes we

wear are the kind that "breathe", i.e. admit nettle stings.

Five hours after we set out, we arrive in the village of Liptovské Revúce. "I'll have a beer and three borovičkas,

please." A bus comes 10 minutes after we stumble into the local pub, and the driver doesn't argue about taking

the bike - filthy and trailing nettles - after seeing our plight.

When we finally arrive at our Ružomberok hotel, we order and drink three bottles of champagne before dinner.

All the clothes and equipment we carry are soaked through, because I didn't think to rainproof the pack. Sleep

doesn't come for ages, as both of us are cut and scratched and stung so badly we can't find a comfortable

position for our legs.

(to be continued next week)