FIVE alternative telecom companies are about to start operations in Slovakia despite the unwillingness of the dominant carrier Slovak Telecom (ST), which has been enjoying a de facto fixed-line monopoly, to allow other companies to hook up with its network.
Telecoms companies Dial Telecom and eTel Slovensko have signed contracts to interconnect their public telecoms networks with mobile network operator Orange. Three other companies - PosTel, GlobalTel, and US Steel - have also begun providing telephone services within Slovakia. 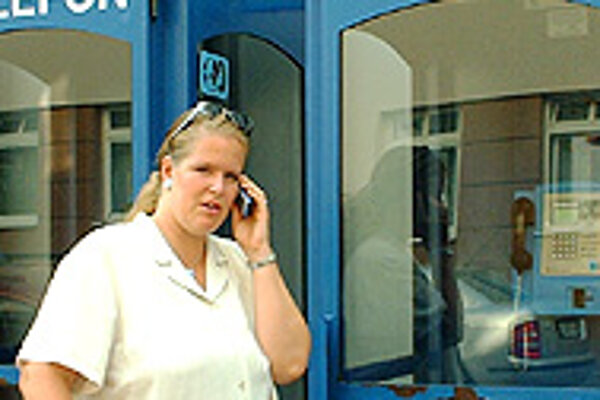 Font size:A-|A+
FIVE alternative telecom companies are about to start operations in Slovakia despite the unwillingness of the dominant carrier Slovak Telecom (ST), which has been enjoying a de facto fixed-line monopoly, to allow other companies to hook up with its network.

Not a single alternative operator has thus far managed to sign an agreement to link up to the existing land-based network, run by the former state monopoly Slovak Telecom, now owned by the German telecoms giant Deutsche Telekom (DT).

Slovak Telecom argues that negotiations with alternative operators on connecting their networks to ST have been complicated by the unrealistic demands of the operators.

ST spokesman Radoslav Bielka told The Slovak Spectator: "[We have been] prepared to negotiate since January 1st, 2003." ST claims that they allowed the alternative operators to suggest the time framework for the meetings, but that it was those operators who actually delayed the bargaining.

Most of the operators had been waiting for a revision to the country's telecoms law to be passed. The parliament's failure to pass the bill, unable to overrule an earlier veto by President Rudolf Schuster in July, has again set back the liberalisation of the Slovak telecoms market: the same happened in 2002, with an earlier draft of the bill.

Critics have long been accusing ST of deliberately holding up the liberalisation process in order to consolidate its market dominance. After the law failed last summer, some suggested that intense lobbying by ST and an alleged secret clause in the privatisation contract with German giant DT convinced enough lawmakers not to challenge Schuster's veto.

Although the existence of the clause has never been confirmed, it is rumoured to guarantee DT, which bought 51 percent of ST in 2000, a significant market share.

Alternative operators suggest that the state, which holds the remaining 49 percent of ST, may also be seeking to delay full market liberalisation in order to keep ST's current market dominance.

By June 30, ST had been negotiating the interconnection of networks with 13 operators, all licensed to run fixed-line telecoms networks in Slovakia. None of them have managed to sign a deal with ST.

Telephone service licence-holders must start providing telecommunications services within a fixed period after their license is issued, which puts them under considerable time pressure for getting hooked into the network of ST or one of the mobile operators.

Alternative operators say that without open negotiation with ST and the publication of the dominant operator's reference price - the basic rate at which networks are connected, which ST refuses to publish - they may be unable to begin offering service within the time required by their licenses.

Slovakia's Telecommunications Office (TÚ) has responded quite positively to the Orange deal. "We are glad that this has been achieved despite inadequate legislation for the opening of the market," TÚ deputy director Juraj Michňa told the daily Pravda.

Orange has signed the deal with the alternative operator at a time when ST and Orange have started playing rough in their fight for customers. Last month, ST had sued Orange for what it called unfair competition but later withdrew the complaint. The Bratislava Regional Court issued a preliminary injunction to make Orange remove all advertising for its post-paid phone service Pausál 30 Mini, which was designed to lure ST fixed-line users.

"We are glad that our company has been approached by alternative operators with offers to sign deals on interconnection," Orange's Peter Tóth told The Slovak Spectator. In its official stand Orange states that they have tried to contribute to the liberalisation of the Slovak telecoms market and to increasing the competition, even in the sphere of fixed-line telecoms services.

ST does not think that the Orange deal will have any direct impact on the company, as it also claims to be making efforts to fulfil its obligation to interconnect with alternative operators.

The Telecommunications Office looks negatively on the fact that dominant fixed-line provider ST has not yet concluded any such contract.

ST told The Slovak Spectator that it has been making every effort to reach an agreement with the alternative operators.